The disruptive phone calls came at dinnertime, and were not the usual telemarketing solicitations. The caller identified as a representative from a multinational oil company wanting to run a 24-inch pipeline through farmland owned by James and Krista Botsford. The caller was not selling anything, but wanted the Botsfords to sell a right of way through their North Dakota land. This pipeline would push 300,000 barrels of oil a day to ports in Superior Wisconsin. The crude oil, pumped straight from the Bakken Oil Fields, could not be sold on the world market until it was processed at refineries on Lake Superior.

Every time that James Botsford answered the persistent ringing of the phone, he told the caller in no uncertain terms that he and his wife were not interested. They did not want to participate in a private enterprise that would increase global warming and threaten the lives of his heirs. This was a moral imperative and no amount of persuasion, including money, would make him change his mind. 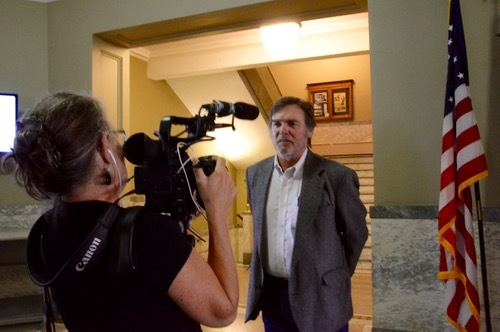 But that was almost two years ago.

The Botsfords stood their ground, and today the oil company lost days before the appeal was to be heard in the Supreme Court of North Dakota. Enbridge capitulated before the oral arguments.

In an email statement, the Botsfords thanked their legal team at Baumstark Braaten in Bismarck and issued an impassioned plea for the environment and those fighting similar battles.

My wife and I are so pleased with this outcome. It is a complete victory for our case. Once Enbridge abandoned their interest in taking our land and agreed to pay our attorney fees there was really nothing left to fight about in our case. However, there are many more property owners out there in the path of giants like Enbridge. People who want to stop this horrible rush to extract the worst of the fossil fuels and the spewing of unheard of amounts of carbon into the atmosphere. And people who just simply believe a corporation should not be able to take your private property for their for-profit purposes. In our case we had firm commitments on both issues. We hope this victory will encourage others who want to take a stand on one or both of these important issues. David can beat Goliath.

North Dakota Pipeline Inc., a joint venture of Enbridge Energy Partners, L.P. and Williston Basin Pipe Line LLC., was ordered to abandon an easement on the Botsford's farmland. In addition the company must reimburse the Botsfords $82,581.25 in attorney and other fees.

The Sandpiper Pipeline, a project that would carry Bakken crude oil from western North Dakota to refineries in Superior, Wisconsin was recently scuttled in Minnesota. Native American tribes, Minnesota landowners, and citizens banded together to fight the project before the Minnesota Utilities Commission and other regulatory agencies. Botsfords' lone holdout in North Dakota was the western lynchpin for the Sandpiper pipeline, which is now a moot question.

In an early September filing with the Minnesota Public Utilities Commission, Enbridge said "it will no longer pursue the regulatory approvals necessary to construct Sandpiper in Minnesota."

Enbridge is now pushing its investment in the Dakota Access Pipeline (DAPL) and along with its parent company, Energy Transfer Inc., facing stiff opposition from Native American tribes at the Standing Rock protest near Cannonball North Dakota.

The stakes could not be bigger for both sides, but with oil behemoths banding together, the fight will be even more difficult for the Sioux Nation. They might want to take a page from the Botsford playbook and realize that it is possible to win. As the Botsfords said, David can indeed beat Goliath.