Last Saturday at the North Face Endurance Challenge outside of San Francisco, I encountered more than one unexpected surprise.

For one, the fact that I was there and racing wasn't something I'd planned on earlier this year. I'd inked in two major running trips for the 2011 calendar -- a stage race called the TransRockies Run in Colorado, and the New York City Marathon. I figured that would be it for destination events. But when celebrity ultramarathon runner Dean Karnazes emailed me and offered my boyfriend, Charlie, and me race entries in the North Face Endurance Challenge in the Marin Headlands, I figured I couldn't pass it up. 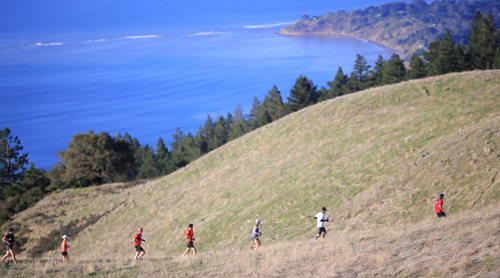 Then, there was the pleasant surprise of the North Bay weather. After shivering in the 30s and 40s in Seattle during recent weeks, I envisioned running in tights and long sleeves. But when we showed up in San Francisco on Friday morning, we encountered sunny skies and a high of 70 degrees. To two Pacific Northwesterners, it felt like summer. Both Charlie and I ended up slathering on sunscreen and racing in shorts and tank tops.

But the biggest surprise of the North Face Endurance Challenge weekend actually came the evening after the race. I'll get into that a bit more in a moment.

The weekend began when we arrived in the Bay Area on Friday. Local public relations agency Outside PR invited us to check out the trampoline gym House of Air, located near Crissy Field and the Presidio. We jumped around the huge facility, enjoying a bit of cautious play. (The day before a 50K run didn't seem the best time to attempt any real acrobatics.)

Though the most dedicated runners would probably have spent the rest of the day resting, we couldn't resist the 70 degree sunshine. Being devout rowers, we decided we needed to check out the Open Water Rowing Center in Sausalito, and perhaps even take out a double. When we discovered that the center closed each day in the early afternoon, we shifted gears and headed to the nearby kayak rental facility instead. Paddling out in the bay in shorts and t-shirts felt like a true escape from winter.

The next morning, we shifted into distance running mode. We headed to the ferry terminal to catch a shuttle to the race start. That's where we encountered the single hiccup of the race. When I'd asked race organizers on their Facebook page how frequently the shuttles ran, they'd told me every half hour until 6:30. We showed up at 5:50 and waited with an ever growing group of runners.

A little after 6 a.m., the shuttle still hadn't arrived. A race volunteer with a walkie talkie then informed us that two full buses had departed at 5:30 a.m., and they weren't coming back for another pick up. Since we'd been told we couldn't park our own vehicles at the race start, Charlie and I scrambled to catch a ride with the husband of one of the racers, who had also been waiting at the terminal. He dropped us off at the start with just enough time to spare, but I wondered about the other runners counting on shuttles. Did more buses ever come? Either way, the information and organization seemed chaotic and unreliable. Not what you need on race morning!

We quickly forgot about any transportation issues, as the race began with the rising sun. Climbing up into the Marin Headlands, we were quickly treated to spectacular views of the ocean, Golden Gate Bridge, and surrounding nature.

As the run progressed, I decided that it had to be one of my all-time favorite courses. The hills were challenging but for the most part runnable, and the terrain wasn't very technical. I could look all around me rather than focus only on the ground ahead.

We ran through the open hills of the Headlands, along the ocean, and through beautiful forests and meadows. The constantly changing scenery and surroundings entertained us for miles, and I remained in good spirits throughout. Charlie and I ran together until the last seven miles or so, when he began to feel the distance and slowed down a little. (Running a 50K is definitely something I talked him into! We've already agreed that we'll do a 25K for our next race together.)

I finished the 50K course in five hours and 44 minutes -- good enough for 9th place among the women. Upon checking the results, I learned that I'd finished in the exact same place in the North Face Endurance Challenge 50K in Bellingham, Washington back in 2009. It seems I'm consistent, at least!

As far as race organization goes, North Face does a stellar job. Frequent aid stations with food and water meant I only needed to carry a single handheld water bottle. I far prefer running without a backpack, so this proved a huge race benefit. Timing chips tracked runners accurately, staggered starts for the various race distances meant little crowding on the trail, and ample food and ice baths at the finish line gathering assured a strong recovery. The only post-race speed bump seemed to be the shuttle system once again. This time, we had no doubt we'd catch a bus, but we waited an hour before one arrived. More frequent buses (or smaller vans that ran continuously) seem like a better race option for future.

By the time we made it back to our hotel and showered, we could have easily fallen asleep. Instead, we made ourselves rally for an Italian dinner out in Tiberon. And good thing we did! After our meal, we took a walk along the harbor. Across the bay, we could see the lights of San Francisco's city skyline and the Golden Gate Bridge. At the docks in Tiburon, boats were aglow with colorful Christmas lights.

To my surprise, Charlie stopped me midway through our walk and told me he had something to give me. He pulled out a ring and said, "Will you marry me?"

I said yes, of course. And now the North Face Endurance Challenge, along with the town of Tiburon, will always have a special meaning for the both of us. 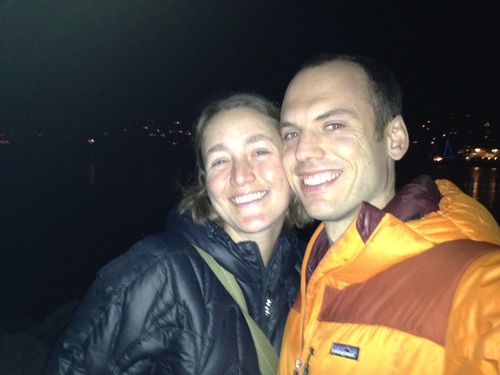 (Above photo taken with iPhone in Tiburon right after engagement)