When we accompanied the New York Philharmonic on its historic trip to North Korea for its February 26 concert, the question that we were asked most often was, "Why?" Why was an American classical music organization invited to perform in the capital of a country with whom we've technically been at war since 1950? Was it simply to hear the Western classical music canon that is largely absent from North Korea? Was it a PR stunt orchestrated (so to speak) to burnish the international profile of the cruel, despotic ruler Kim Jong Il? Or did it have subtler implications? 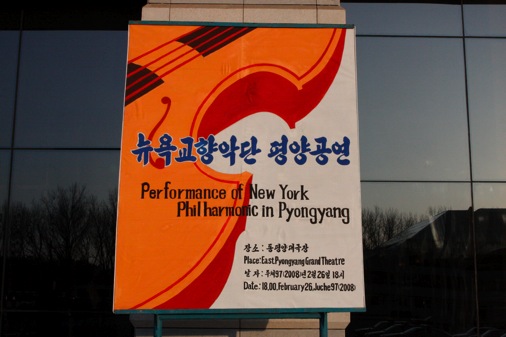 Remember, North Korea is one of the three countries, along with Iraq and Iran, that President Bush characterized in his 2002 State of the Union address as members of the "axis of evil." And we know what he chose to do subsequently with one member -- Iraq. And today, sabers can be heard rattling regarding Iran. But North Korea? That most repressive, most Stalinist of governments, and the only axis member with a demonstrated nuclear capability?

In earlier posts, written and filed from Pyongyang, I asked questions of my own: "Will history remember this night? Can a musical event have any influence on bringing together two nations that have no diplomatic relations? Can a concert conceivably have any impact on the six-party talks that are attempting to get North Korea to give up its nuclear weapons?"

I also related a conversation I had there with Bill Perry, a former secretary of defense during the Clinton administration (and former acquaintance of mine during our Stanford engineering-school days during the 1950s). Perry suggested -- against the conventional wisdom -- that the parties are beginning to realize that they are "likelier to reach an agreement in this final year of the Bush administration than to wait for a new president in 2009."

I wrote further that "the talks were at a tipping point, one that will be brought about by the opposing parties' reducing their distrust of each other. The concert tonight could help bring about that reduction. The goodwill demonstrated by the North Korean government -- they really pulled out all the stops -- and the support of our State Department could be meaningful harbingers."

I concluded my post with questions of my own: "North Korea giving up arms? The US and North Korea resuming diplomatic relations? Can it happen? Yes. Will it happen? To be continued."

Well, believe it or not, the Bush administration has chosen, at least in the case of North Korea, diplomacy over war. Condi Rice has won, and the anti-diplomacy Dick Cheney-John Bolton faction has lost (The Tragic End of Bush's North Korea Policy, WSJ, June 30).

After years of zero progress in the six-party talks, here are three major developments since the February concert:

Op-ed piece by Rice that laid the groundwork and rationale for diplomacy.

"North Korea agreed to disable its main reactor by the end of October and allow international inspections to verify its nuclear disarmament in a deal reached Saturday at the end of six-nation talks.

"In response to North Korea's nuclear declaration the United States announced it would remove the country from its list of state sponsors of terrorism and relax some economic sanctions against it."

"The United States and Russia pledged to provide the outstanding amount of heavy fuel [500,000 tons of fuel oil] by the end of October."

"US Secretary of State Condoleezza Rice met North Korea's top diplomat Wednesday in Singapore, ending a four-year hiatus in Cabinet level contacts between the Bush administration and Pyongyang over its nuclear program."

In just a few months' time, the State Department has made more progress than in the preceding seven and a half years of the Bush administration. We're not yet at the point of North Korea's becoming a golf resort destination (as is Vietnam), but we have moved off the dime. We're engaged in diplomacy, we're talking to people who are not our friends, and we're making headway.

So, once again, why was the New York Philharmonic invited to perform in Pyongyang? My answer: To initiate a dialog between the people of two adversaries, the first such dialog in 58 years. Maybe this musical event was not the only factor in jump-starting the resumption of discussions between the two countries, but I like to think that it was. Paraphrasing the mantra of the 60s, "Make music, not war."