North Korean state media issued two photos Friday that, either by accident or design, appeared to show plans for striking the US mainland, as well as details of the North's military strength.

The pictures, released by the official Korean Central News Agency (KCNA), both showed leader Kim Jong-Un sitting at a desk in what looked like a dedicated military operations room.

The photos accompanied a KCNA report on an emergency meeting with top army leaders in which Kim ordered strategic rocket units to prepare for a possible strike against US mainland and Pacific bases.

One picture showed Kim amongst four uniformed officers, but the main interest lay in the background.

The left of the picture showed a map with the unambiguous title: "Strategic Forces' US Mainland Striking Plan."

Straight lines on the map -- not all of which was visible -- appeared to show the proposed flight paths of missiles striking targets in the continental United States.

"I don't think this is a mistake," a South Korean defence ministry official told AFP.

"I believe it has been intentionally made public, probably in order to distort facts about the North's military power," the official said. 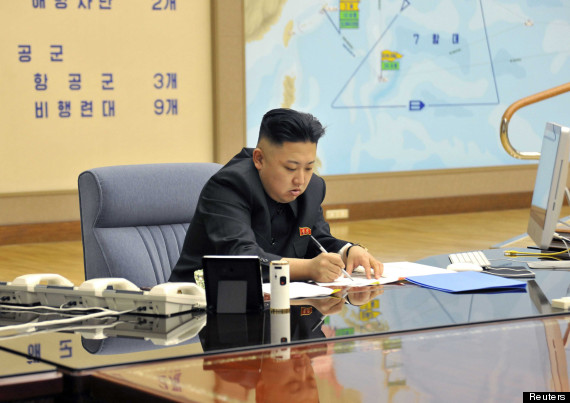 Most experts say North Korea, despite a successful long-range rocket launch in December, is years from developing a genuine inter-continental ballistic missile capable of striking the US mainland.

Its proven short- and medium-range missiles do not even have the range to strike US Pacific bases in Guam or Hawaii.

Further in the background of the same picture, a wall-length screen appeared to list aspects of North Korea's naval strength, with entries such as "Submarines: 40, Landing Craft: 13, Minesweepers: 6."

A second photo, showing Kim alone at his desk, also had a map in the background which appeared to show the tracked or projected movement of the US 7th Fleet in the Pacific Ocean.

1 / 16
In this March 11, 2013 photo released by the Korean Central News Agency (KCNA) and distributed March 12, 2013 by the Korea News Service, North Korean leader Kim Jong Un greets military personnel at a long-range artillery sub-unit of KPA Unit 641 during his visit to front-line military units near the western sea boarder in North Korea near the South's western border island of Baengnyeong. (AP Photo/KCNA via KNS)
AP