The peculiar video shows a young North Korean man and his dreams of flying a space shuttle around the world. The clip then shifts to burning skyscrapers in a city that resembles New York, draped in a U.S. flag. And most unusual of all, the 1985 tune "We Are The World" accompanies these images.

"Somewhere in the United States, black clouds of smoke are billowing," a caption reads, according to AFP. "It seems that the nest of wickedness is ablaze with the fire started by itself," it added. 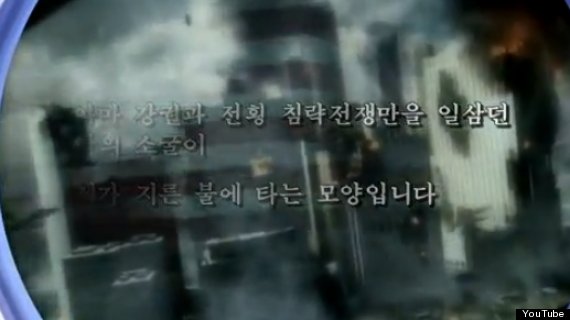 Pyongyang announced in January plans to conduct a new nuclear test in reaction to sanctions imposed on North Korea by the United Nations after a December rocket launch. The AP reported last week that South Korea believes the nuclear test is imminent.

In the final days of her term as U.S. Secretary of State, Hillary Clinton expressed regret over Pyongyang's move, saying she had hoped the country's young leader Kim Jong Un would have chosen a different path. "We expected him to focus on improving the lives of the North Korean people, not just the elite, but everyone to have more education, more openness, more opportunity," Clinton said, according to the Associated Press. "And instead, he has engaged in very provocative rhetoric and behavior."

At the end of the video, AFP adds, the sleeping young man concludes his dream will "surely come true."

"Despite all kinds of attempts by imperialists to isolate and crush us... never will anyone be able to stop the people marching toward a final victory."