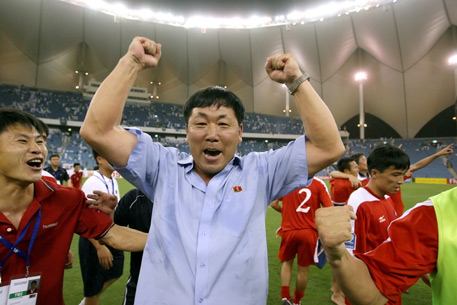 North Korea's soccer squad got on the plane for South Africa this week. And here is what the newspaper said in Pyongyang, on Monday July 12, 2010, the day after the World Cup Final:

Over a moonie ago, the flowers at the airport in glorious Pyongyang rained down upon our blessed players and coaches as they headed off for a full month of rigorous training that led to our victory in the World Cup Finals. The world came to know us. In the first round, Brazil were left staring at the purple grass; Cristiano Ronaldo, a deviant Portuguese underwearer, was rendered impotent, and Ivory Coast were swept away in a tidal wave of attacks that left those crazy men crushed and broken fools. In the Round of 16, we annihilated our treacherous brothers in the south with shots on goal that moved faster than torpedoes in the water; in the quarter-finals, our soccer heroes smacked the head of ugly English bulldogs; the semis sent the mad cows of Japan to the slaughter house and then on the day of our eternal salvation, our Dear Leader poured forth with juche, as the vanguard of the people's revolution obliterated those damn Yankees in the World Cup Final. In the sporting stands of America, the hot dogs went limp, and the poetry of our victory rose over them like rancid mustard and rotted relish, apparently on sale at Yankee Stadium according to our secret agents. Now, with the World Cup in our hands, we no longer need nuclear weapons, and we're not handing the Cup back because we might melt it down, if we don't get what we want. A box of wieners, or a signed photograph of sexy Goddess Hillary Clinton, would be a start.

*Reports indicate that ordinary North Koreans will not be allowed to watch the Finals on TV, or hear commentary on the radio. Too bad. A nation will miss out on its predetermined glory. C'mon North Korea!

If you fancy it, check out my guide to the World Cup Finals, with more mad stuff on North Korea, The Chollima.