North Korea has committed horrors on a level with the Holocaust, according to a United Nations report cataloguing the country's crimes against humanity.

The atrocities carried out by Kim Jong Un's regime in North Korea are "strikingly similar" to what the Nazis did during World War II, said Michael Kirby, chairman of the U.N. Commission of Inquiry on Human Rights in North Korea, per Reuters.

The 400-page investigation, released Monday, also compares North Korea's notorious penal colonies to Soviet dictator Josef Stalin's gulags. But the report notes that North Korea's camps are even worse in some ways. "Many features of the DPRK [Democratic People's Republic of Korea] camps are even harsher than what could be found in the Gulag camps," it says.

The result of a yearlong investigation involving interviews with more than 320 witnesses, the U.N. report states that the actions of the Kim regime have caused the deaths of "at the very least hundreds of thousands of human beings."

"Torture is an established feature of the interrogation process," the report says. It describes how prisoners are often kept in cells so small they can't stand up or stretch out on the ground. Before long, the victim's blood circulation is cut off, and the victim "turns into a rusty brown colour." 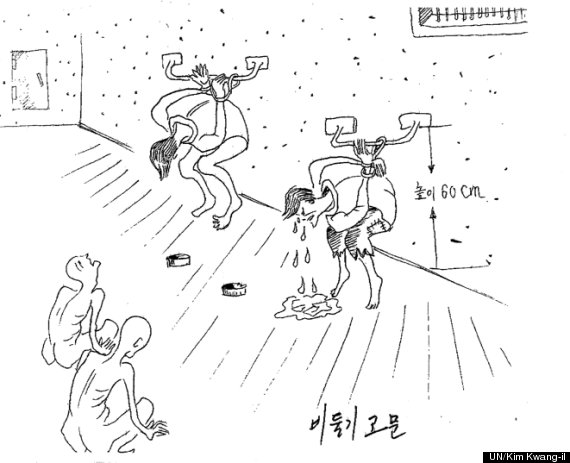 A drawing included in the report. The artist, former North Korean prisoner Kim Kwang Il, depicts "pigeon torture," where detainees are handcuffed in stress positions and beaten, sometimes until they begin vomiting blood.

Another harrowing account contained in the U.N.'s document describes torture chambers equipped with water tanks for submerging prisoners, and hooks in the walls to "hang people upside down." Other torture techniques include driving long needles under detainees' fingernails.

These camps exist to eradicate even the slightest perception of disagreement with the North Korean government. Citizens can be imprisoned for life merely for listening to a foreign radio broadcast, or for divulging information about the private lives of the Kim family.

Even the families of political prisoners are often wiped out, a former North Korean prison guard told U.N. investigators. "According to Kim Il Sung's instructions ... three generations of the inmate should be annihilated," the guard said.

Kang Chol Hwan, a North Korean who spent a decade in a secret labor camp in the 1980s, explains in his memoir, The Aquariums of Pyongyang, that the government spoke openly of exterminating whole groups of people:

As the official propaganda never tired of reminding us, it was necessary to "dessicate the seedlings of counterrevolution, pull them out by their roots, exterminate every last one of them." That’s the actual word the North Korean authorities used: exterminate--'myulhada.'

U.N. commissioners said they wrote a letter to Kim Jong Un, saying they are recommending North Korea be prosecuted for crimes against humanity by the International Criminal Court. But Pyongyang is not cooperating. In a prepared statement, the North Korean government called the U.N.'s report a "political plot aimed at sabotaging the socialist system ... under the pretext of 'human rights protection,'" according to CNN.

Kirby, a retired Australian judge, urged the international community to action on the day of the report's release. "At the end of the Second World War, so many people said, 'If only we had known the wrongs that were done in the countries of the hostile forces,'" Kirby said at a Geneva press conference, according to NBC News. "Well now the international community does know."

Still, it appears unlikely for now the U.N. will be able to put North Korea on trial at the International Criminal Court. Such a move requires approval of the U.N. Security Council's permanent members, which include China, an ally of North Korea that could veto any such decision.