BARKSDALE AIR FORCE BASE, La. -- Nobody knew with certainty how North Korea would react when President Obama recently ordered nuclear-capable B-52 bombers of the Air Force Global Strike Command here to thunder over the Korean peninsula in simulated bombing attacks.

North Korea's young dictator, Kim Jong Un, gathered his generals around war maps and unleashed fusillades of fiery rhetoric, threatening to use his newly tested nuclear weapons against the West. After Obama upped the ante by deploying B-2 "Stealth" bombers, which can carry 20 tons of thermonuclear weapons, Kim escalated further by declaring "a state of war." Within days, however, the crisis seemed to subside, though few believed the confrontation was over.

But as Obama and Kim struggled to read each other's intentions and determination -- groping through unknowns to guess how far the other was willing to go -- it was clear that the world has entered a dangerous new era in which the old rules of nuclear gamesmanship no longer apply, senior U.S. officials and other experts say.

Across the world's most unstable regions, small powers such as North Korea, Israel, Pakistan and India are amassing nuclear warfighting capabilities. Iran, despite threats by the United States and Israel, may eventually join this club. So, too, may terrorists.

In a new book, The Second Nuclear Age, Bracken argues that the United States should spend less effort on the noble but failing goal to halt the spread of nuclear weapons, and turn its attention to mastering the unique dynamics of the new nuclear age and how to manage it safely.

"Atomic weapons have returned for a second act," Bracken writes. "Few people have thought about how atomic weapons reshape the strategic rivalries in the world's most contested regions."

Until now, the U.S. strategic nuclear force and the principles that guide it were largely fashioned during the Cold War confrontation with the Soviet Union. But today's tensions between India and Pakistan, in the Middle East and in the volatile region encompassed by China, Japan and the Koreas, are quite different.

In some cases, short distances -- four-minute missile flight time between India and Pakistan, shorter still between North and South Korea -- mean nuclear detonations can occur with virtually no warning. That gives leaders fearing attack strong incentive to launch early in a crisis to avoid catastrophic loss. It also raises the value of delegating nuclear launch authority to lower-ranking officials in case command headquarters is destroyed in a first strike. With crisis decision-making compressed into minutes, there is greater likelihood of fatal misjudgments.

North Korea's leaders likely feel immense pressure to resort to nuclear weapons in a use-it-or-lose-it crisis, with U.S. conventional and nuclear-capable aircraft and missiles poised nearby. North Korea has foregone investment in its massive ground forces in order to focus resources on building its nuclear arsenal. As a result, experts say, if pressed in a conflict, North Korea may feel it has to go nuclear to stave off total defeat.

Israel, which has long had an unacknowledged nuclear weapons arsenal, is reported to be deploying submarines capable of launching nuclear-tipped missiles. That's a step others, including India and China, are taking to ensure that if their ground-based missiles are destroyed in a first strike, a nuclear retaliation is still possible. Ordering these subs out to submerge at sea can also be used as a signal to adversaries that serious preparations for nuclear war have begun, a significant and dangerous step in crisis escalation.

India and Pakistan offer an example of the pressures that exist in new nuclear age. The two nations, which already have fought four wars and numerous border clashes and terrorist attacks, now confront each other with bristling nuclear arsenals. India far outweighs Pakistan in population, wealth and the size and capability of its military.

Pakistan, outgunned on the ground, has more nukes: it is the fast-growing nuclear power on earth, having doubled its nuclear arsenal to perhaps 200 warheads in the past few years, according to retired senior CIA official Bruce Riedel. Riedel is the author of a new book on the India-Pakistan nuclear confrontation, titled, Avoiding Armageddon: America, India, and Pakistan to the Brink and Back.

India boasts nuclear-armed bombers as well as ground-launched missiles that can target as far as Beijing, and a submarine designed to fire multi-warhead nuclear missiles. The country has also publicly adopted a military strategy called "Cold Start," designed for surprise attack.

Such inherently unstable situations make intervention risky for the United States as well.

As a crisis escalates into fighting, a nuclear power like Pakistan might mistake an attack on its airfields or infantry formations as an all-out assault on its prized nuclear arsenal. Attacks on a nation's air defenses -- in a U.S. or NATO operation to establish a no-fly zone, for instance -- might inadvertently damage that country's nuclear command and control system. In both cases, the nation under attack would have the incentive, in the chaos of crisis, to launch its nuclear weapons in self defense.

"Does the application of how we normally do business make an adversary more likely either to use nuclear weapons or delegate authority for use down in case they lose command and control [links]? These are all things we need to be thinking about in more detail," Kowalski said. Such thinking is being done, he added, at senior levels at the U.S. Strategic Command, the joint headquarters that conducts strategic planning and operations.

Unfortunately, the record of leaders responding to sudden existential threats is not a good one. Even in the United States, with arguably the world's most sophisticated crisis alert system, the 9/11 terrorist attacks created chaos in the White House situation room. Then-President George W. Bush couldn't reach the secretary of defense; the military got word of the first hijacking nine minutes before the plane struck the World Trade Center, and got no advanced warning of the second, third or fourth hijacked aircraft. Fighters were scrambled and vectored out over the ocean, 150 miles away when the Pentagon was hit, according to the 9/11 Commission report.

Apart from the obvious global risks of even a "small" nuclear exchange, the possibility also threatens deployed U.S. military forces. A Pentagon report released two years ago concluded that military forces are not sufficiently protected from the effects of nuclear weapons, that their "survivability, effectiveness and adaptation to Nuclear Weapons Effects is at best unknown," and that accomplishing the mission would require "luck and ingenuity" and would involve "an unnecessarily high human cost." The military's lack of expertise in planning for nuclear war, the report said, is "a serious and potentially show-stopping issue."

A recent report by the Army War College Center for Strategic Leadership titled, "In The Dark: Military Planning for a Catastrophic Critical Infrastructure Event" noted that expertise in managing nuclear forces has suffered from "15 years of neglect by senior leadership."

One reason that the big issues of strategic nuclear deterrence theory and nuclear crisis-management practice have attracted so few new theorists and thinkers is the long-standing official policy of the United States: that no new nuclear powers beyond the "Big Five" (the U.S., Russia, China, United Kingdom and France) should be allowed. The Bush administration cited this line in calling for the U.S. invasion of Iraq in 2003 based on the now-disproved claim of weapons of mass destruction, and the policy continues to be the foundation for severe international sanctions against North Korea and Iran.

As Obama declared in Israel last month, "I’ve made the position of the United States of America clear: Iran must not get a nuclear weapon. This is not a danger that can be contained, and as president, I’ve said all options are on the table for achieving our objectives. America will do what we must to prevent a nuclear-armed Iran."

With that policy of prevention in place, there is less incentive within the government or academia to plan for an Iran with nuclear weapons, to brainstorm new strategies to prevent crises from escalating toward a nuclear exchange, or to devise new ways to contain provocative impulses.

Yet the issues are pressing. Leaders like North Korea's Kim Jong Un, who are suddenly wielding immense destructive power, no longer have the luxury of time that Kennedy and Khrushchev had to fumble their way through the Cuban missile crisis.

After a few of these hair-raising crises early in the Cold War, Washington and Moscow figured out ways to manage their ideological competition without getting sucked into a spiral of uncontrolled escalation.

No such procedures exist today between nuclear adversaries. U.S. Army Gen. Walter L. Sharp, the four-star commander of U.S. and allied forces in South Korea until he retired in 2011, confirmed to The Huffington Post that there is no back-channel communications link, for example, that would enable senior U.S. and North Korean leaders to talk in a crisis (North Korea has disconnected the hotline that until recently connected military representatives across the Demilitarized Zone).

"What we all worry about," Sharp said in late March as the Korea crisis reached a boil, "is how do you control escalation when you get into this situation?"

Since his book was published last fall, Bracken has received a quiet but steady stream of visitors, some in uniform, who want to talk about his ideas for managing the new nuclear era. But overall, Bracken told The Huffington Post, "new thinking about all this is not taking place with the energy it should." 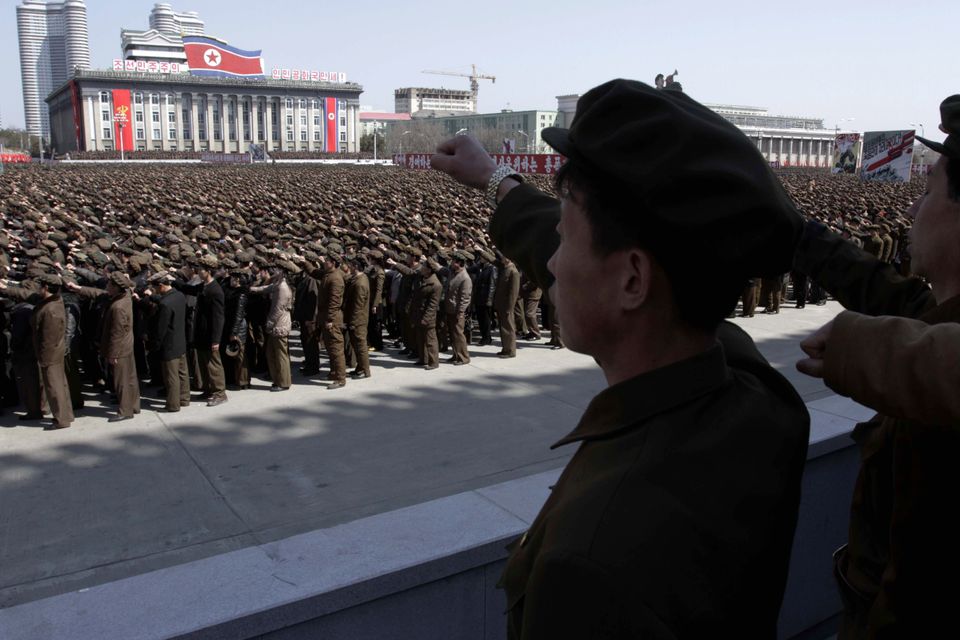 1 / 7
North Koreans punch the air during a rally at Kim Il Sung Square in downtown Pyongyang, North Korea, Friday, March 29, 2013. Tens of thousands of North Koreans turned out for the mass rally at the main square in Pyongyang in support of their leader Kim Jong Un's call to arms. (AP Photo/Jon Chol Jin)
AP