"Magical" is not a word that comes to mind when most people think of North Korea --"harsh," or "poor" or even "evil;" certainly not an adjective that connotes enchantment. But then, most people haven't been there. In April, I joined a tour group headed to the DPRK for the Great Leader Kim Il Sung's hundredth birthday celebration. There were 20 or so of us coming mainly from the U.S., Canada, Europe and Australia with a few Israeli's thrown in for good measure. A remarkably young (average age 30), and well-traveled group, most of us had decided to go simply for the adventure. I had another reason. I was doing research for my next multimedia novel. Inspired by a real-life account, it tells the story of a Japanese housewife kidnapped from a beach resort by frogmen and taken to North Korea to teach an operative how to "be" Japanese. I was attracted to the story not only for its tragic-comic potential, but also because it would allow me to explore my own relationship to national identity. As a tourist, I would put myself into a position of constantly comparing my own way of life and values with those of another country.

The record of those experiences -- photos, diaries, and videos, which I planned to incorporate into the project -- would then necessarily reflect the biases both personal and nationalistic that I carried with me from home.

Little did I know that I was about to visit a country where the manufacture of national identity is not only overtly artificial, it has become a major industry. Going to North Korea is like seeing the mirror used in a magic trick. The illusion of national identity as natural or intrinsic to a people, overriding even a sense of humanity, begins to dissolve.

North Korea is the end game of post-modernism. Nothing is what it is; everything stands for something else. Even the Soviet Union at the height of the Cold War, was more realistic. In North Korea, the medium is the message and the message is "everything is GREAT!" This is most strikingly manifested in the architecture in Pyongyang, where, amidst derelict communist-style cement block buildings, you will suddenly see a hotel (as yet unfinished) in the shape of a huge glass arrowhead, rising a hundred and thirty stories into the air, or a massive ice rink that is kept at -5 degrees Celsius year-round. Even more bizarre is the Keason Fun Fair, a state-of-the-art, Italian-made amusement park, that pulses with neon in the center of Pyongyang despite rolling blackouts everywhere else. My favorite example, however, is not a building; it's the still image that's run on TV after the limited programming stops -- a blue sky with a few puffy clouds -- the perpetually perfect summer's day. 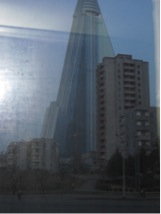 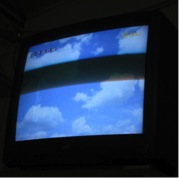 Every Day's a Blue-Sky Day In the DPRK!

As a visitor, I did not experience that which counteracts illusion: the gravity of day-to-day living. Without a cell phone (it was confiscated when I arrived), shuttled around on a bus according to a schedule that changed with the whim of the government, I floated along with little sense of time or space. Reality hit only once when several people came down with food poisoning. Everyone came together to help. We pooled our Immodium and antibiotics, offered rehydration salts and plastic bags. This was part of the enchantment: we did not behave like strangers. Everyone was engaged because without phones or Internet or TV, there was no other way to be. In a few short days, we rediscovered the pleasures of human contact.

At the airport in Chicago, waiting for the flight to Beijing, I sit on the floor next to a 22-year-old who is returning to her birthplace after graduating college. She works at Disneyworld in Florida, doing something with computers. We meet over an electrical outlet near the women's bathroom. Both of us have plugged in our electronic devices before the 13-hour flight. She asks me where I am going, I tell her "North Korea." She doesn't seem fazed. It soon becomes clear, that despite the recent news coverage, she has no knowledge of that place. Her ignorance disheartens me. I wonder if she is aware that we fought a war, that, 60 years later, we are technically still at war. She watches as I balance today's (April 9th, 2012) New York Times on my knees. The front page shows a steel-jawed soldier in front of the rocket that North Korea plans to launch on Kim il-Sung's 100th birthday. Behind the scaffolding, I've drawn a stick figure, an arrow pointing to it, and the words. "Yes, that's me peeking out from behind the rocket." I snap a picture with my phone, post it to Facebook, and immediately receive several thumbs-up. 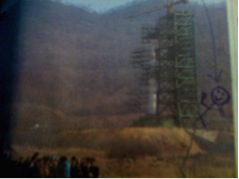 The newspaper remains in my bag, until, bored with the long bus ride, I pull it out and show Mr. Park, one of our North Korean handlers.

"Look," I say. "You guys made the big time -- front page of The New York Times. The most important newspaper in America."

Mr. Park ogles it like its cake. He asks if he can keep it for a while. I'm stunned. I cannot imagine he has the authority to read it. Silently handing it over, I feel like I am participating in something momentous. It is a tiny act of sedition, nothing anyone will ever read about in a history book, but it fills me with exhilaration.

Every nation has its mythology, a reason why it is uniquely destined for greatness. In the United States, that reason is our Constitution and the liberties guaranteed in the Bill of Rights. I am an American. I want to believe that my country is still a symbol of freedom. I want to believe even when the facts contradict me.

I find the newspaper in the seat pocket the next day. Mr. Park has taken what he needs, and left it for me to bring home.

This is the first post in a series about my trip to North Korea.