"Arirang" is a North Korean performance ritual whereby approximately 100,000 citizens practice for six months to perfect a two-hour mosaic in motion. The resulting artwork is a visual feast, replete with unbelievable details yet unnerving in the amount of heavy-handed propaganda used to create these stories. Photojournalist Jeremy Hunter captures the tenuous balance between beauty and fear in his series of five-foot photographs documenting the "synchronised extravaganza" that began in 2002. 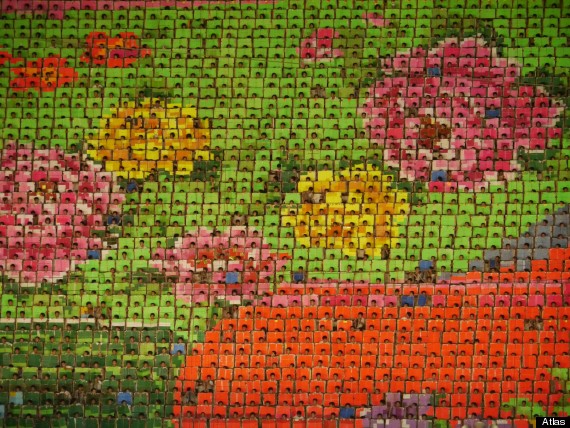 In a new exhibition entitled "High Resolutions" at Atlas Gallery in London, Hunter's work is featured alongside photography heavyweights including Man Ray, Helmut Newton, Cindy Sherman and Weegee. The intrepid photographer holds his own amid these artists, however.

In this series below, he captures the stunning amount of performers, from teenagers to military officials, choreographed in perfect harmony as they move through colorful 150-page flip charts, methodically changing the living tableau on cue.

Do you find the images below entrancing, disturbing or both? Let us know in the comments.