I have been anticipating and dreading the Domiz camp women's meeting for weeks. It was from Domiz camp that I heard the reports of sexual violence I wrote about in my first blog. Two days ago we finally sat down to talk together -- the Domiz women refugees and I -- although I'd been warned that it was not culturally appropriate for me to ask directly about sexual assault. (For what it's worth, I didn't need to be told -- can you imagine asking any woman say, been raped lately?). I planned to begin by asking them how they felt about camp safety, and whether they felt that their daughters and mothers were being adequately protected. 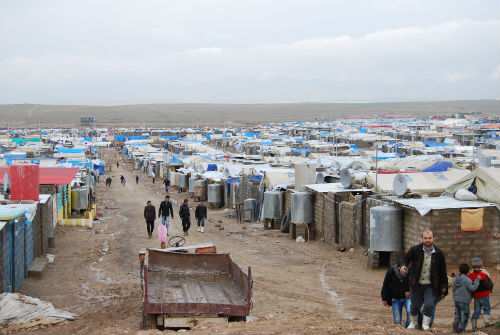 Domiz is a sprawling camp that is growing rapidly, with hundreds of new refugees arriving daily.

It all changed when I got into the room. There were probably 30 women crammed into an office in a portable building. There were a few elders among them, some college-age women, and the rest fell somewhere in between. All but two covered their heads, which is a sign that they value piety and modesty. What changed everything were the translators: as I speak neither Arabic nor Kurdish and the women don't speak English, so two translators were provided -- and both were men.

They are good men: they work for the International Rescue Committee and have been trained in helping refugees. They've been more than generous with their care, time and personal cell phone numbers in their efforts to assist the residents of Domiz. But they are men nonetheless. And I think because there were men in the room, my questions about female safety went utterly ignored by the women. Instead they were answered with concerns about other issues -- health care for the elderly, job opportunities and access to education. I heard two women say they felt safer in Domiz than they did in Syria, but if you've watched the news lately, that isn't saying much.

The one gender issue they raised freely was the problem of sharing latrines with men. It's a major cultural issue for them, and they felt strongly that all new sections of the camp must provide gender-specific latrines, ideally one per household. If you consider a culture dominated by women who, out of modesty, cover their hair in the presence of non-familial men, I'm sure it makes sense that doing their business in the same space is a non-starter.

This conversation gave me the idea to approach women's issues from another angle: are there enough feminine sanitary supplies in camp? The translator blushed just a little bit as he asked it, I think, but relayed the question. Again unrelated answers came back: the camp needs more tents, cheaper bread. But just then I happened to catch the eye of a young mom in the room -- one who had her son with her. She looked right at me and slowly shook her head no. I nodded I hear you, and looked around the room some more. Three other women silently met my gaze and shook their heads in answer to my question about once-a-month girl stuff: no, there is not enough. But they would not say it out loud. 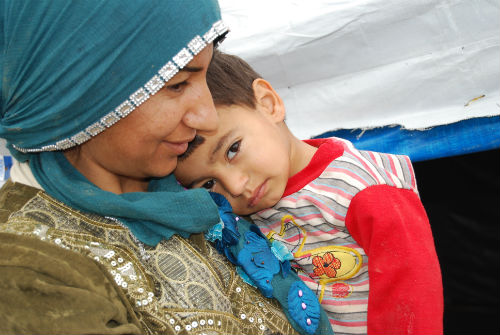 A mother and her child outside their tent at Domiz camp.

Eventually time was up on the meeting, and I thanked them for sitting with me to discuss their concerns. I had written everything down and would relay it to the IRC. At this point discussion bloomed again for a few minutes and in that time someone mentioned that they could use a female doctor. There aren't any? I asked. There is one came the response. And she is not an OB/GYN. One female doctor serving a camp of approximately 42,000 people? I was later told that there is one female OB/GYN who comes in from neighboring Dohuk city once a week, but given that at least half the camp residents are women, the odds of getting to see her are -- well, you can do the math. This is a community of women who will not discuss tampons in the company of men, and there is essentially no gynecological care available from a female physician.

To whom are these women supposed to turn in the event they are raped? While I'm told there are Arabic and Kurdish speaking female aid workers at Domiz, I didn't see any. I would certainly hope that Syrian Kurdish women would not be forced to rely on the translation services of a man to convey their violation and all but one of the physicians in camp are male anyway. From my short experience with them, that is simply not going to happen, which means that these women have no way to speak about their experiences and we have no way to hear about them. That will ideally change next month when a women's center opens at Domiz, but we have to do better.

The To-Do list at Domiz is enormous right now, but we have to get these women someone they can talk with. We cannot ask a population of Muslim women to seek medical and psychological care for sexual abuse from male doctors. They won't do it, and we won't be keeping them safe.

As the women's meeting ended, one of the matriarchs spoke up. She thanked me for asking her about her opinions. She'd been at the camp seven months, she said, and no one had asked her for input. It gave her, as she put it, psychological ease to speak.

Being heard can be healing in and of itself. Without being able to prove it, I believe there are women in Domiz who have critical, painful, vital things to tell us. We need to find the right way to listen.


You can learn more about the International Rescue Committee's response to the ongoing crisis in Syria here.