There were a lot of amazing events this past weekend throughout the Chicagoland area, but there was only one of me and only one philanthropic event I would not have missed for anything in all of Chicago.

Northwestern University held its 39th annual Dance Marathon (NUDM) from March 8-10 with over 1,000 college students participating and raising over $1.2 million dollars. $1,214,632 to be exact.

I donated my photography services for this incredible weekend-long experience -- an incredible enough experience that Illinois Governor Pat Quinn honored NUDM with an official proclamation for March 8-10, 2013 to be "Northwestern University Dance Marathon Weekend" in the state of Illinois. The organization's impact on the surrounding community, The Danny Did Foundation, and every sponsor and participant is immeasurable. The dancing may last 30 hours, but the true effect of NUDM really lasts for years to come. The donations they provide each year to a specially chosen charity helps in funding research endeavors, covering any needs the organization may have, and developing programs to enrich communities among other benefits. Past charities NUDM has supported include Andrew McDonough B+ Foundation for childhood cancer, The Children's Heart Foundation, Bear Necessities, and CURE (Citizens United for Research in Epilepsy). This year NUDM supported The Danny Did Foundation along with the Evanston Community Foundation. Founded in January 2010 by Chicagoans Mike and Mariann Stanton after the sudden unexpected death in epilepsy (SUDEP) of their 4-year-old son Danny, The Danny Did Foundation is dedicated in its mission to prevent deaths caused by seizures. The issue of aggressively addressing SUDEP is as urgent as it is logical with nearly three million people facing the challenges of epilepsy in the U.S. and 50 million people affected by epilepsy worldwide.

What exactly goes down during 30 hours of dancing?

For starters, participants do get some time off their feet in between 10 dancing periods of time (called blocks). Each block lasts for three hours and dancers get 10 minutes for resting. During each block, a pre-determined theme (this year's standout themes: Thrift Shop, Let's Get Weird, and Space Jam) influences the music played and the costumes worn by the dancers. Snacks are periodically delivered to the dance floor via well-orchestrated food committee parades that weave through the hundreds of participants, as well as three designated breaks for breakfast, lunch, and dinner.

Special performances and visitors take the stage to cheer on the dancers and lift their spirits throughout the marathon which this year included Illinois State Senator Dan Kotowski, Football coach Pat Fitzgerald and the Northwestern football team along with speakers from The Danny Did Foundation who provided personal stories to share how important the dancers' participation was to so many people. The cast of Modern Family, Jonah Hill, Adam Sandler, Olympian and NU alum Matt Grevers, activist Erin Brokovich, and director David O. Russell among a slew of other celebrities shared their support for NUDM via video messages that were broadcast on the tent's two jumbo screens.

The energy inside the DM tent is indescribable. If I plotted the alertness level of the crowd throughout the 30 hours it would look like a V (the first two blocks obviously having the most energy and then the final two blocks culminating with the big reveal of how much NUDM has raised). The marathon begins at 7 p.m. on Friday with all the dancers giving it their all on the dance floor. By sunrise, exhaustion is inescapable, but the annual song series of "Here Comes the Sun," "Piano Man," and "Seasons of Love" with yellow balloons dropping from the ceiling lift tired spirits (this is my favorite moment of DM). Breakfast at 7 a.m. is the lowest point of energy for the large majority of dancers. They finally get to sit down and eat their first meal while student groups perform in hopes of giving the dancers some energy to get through the 18 hours left. Not even the NU drumline succeeded in keeping everyone awake. Once breakfast is over, things can only look up.

Contests, organized games on stage, a choreographed routine that is taught to all the dancers, and more speakers and videos guide the participants through the remaining hours of dancing to the most important moment of the marathon -- the big reveal of how much NUDM raised.

Block 10 is when everyone forgets about how tired they are. The final three hours are filled with the happiest dancers you'll ever see -- happy for the end of the marathon but mainly for how much they've done in support of The Danny Did Foundation.

As 12:30 a.m. Sunday morning approaches, a large board is brought on stage (not unlike one you'd find on The Price is Right) and the executive committee that organized the event led by Northwestern seniors Matt Larsen and Katie Amys sits on stage hugging each other with bated breath for the final total.

This year, the reveal of the record-breaking $1,214,632 brought the greatest cheers as last year's amount is trumped by over $100,000. The immense amount of love and tears that spreads throughout the tent is indescribable. There is finally a moment of stillness as Collin McLoughlin's acoustic cover of "Save the World Tonight" plays and the entire crowd (most of them -- and me -- in tears) takes the moment in. Together, they have raised over $1.2 million. Together they have danced for 30 hours. Together they have made a difference.

Get a taste of the Northwestern University Dance Marathon experience (without the sweating and aching feet) in the gallery below!

For more photos on Chicago culture and events visit: www.ChicagoHooked.com and www.JustinBarbin.com. 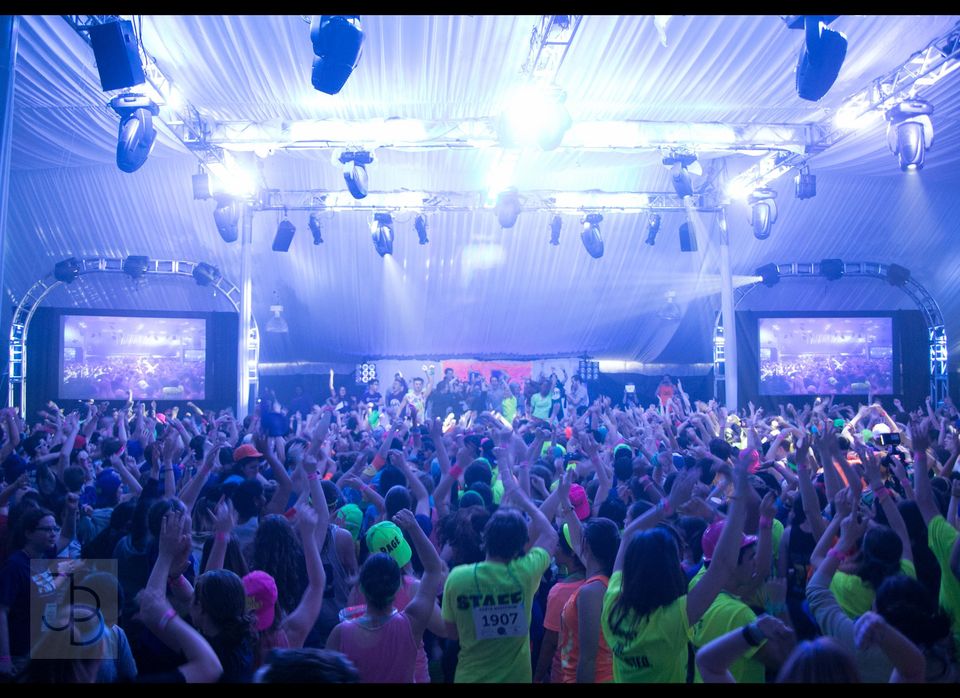