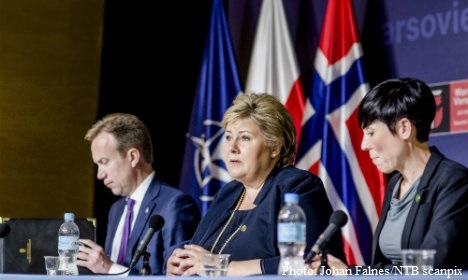 We live in times of turmoil and instability. All corners of the world are affected. Located far north, with a population of 5 million people, Norway is contributing along many lines of efforts to foster security and stability in our region, but also in other corners of the world. At the core of this engagement lies decades of strong transatlantic relations.

This week, Norway's Minister of Defense Søreide will meet with her counterparts, including newly appointed US Secretary of Defense Mattis, at the NATO Defense Ministers' meeting in Brussels to discuss today's security challenges and the way forward. At the same time, G20 Foreign Ministers will be meeting in Hamburg, where Foreign Minister Brende will represent Norway. Then, hundreds of decision-makers from heads of states, including Prime Minister Solberg, foreign and defense ministers, academics and experts will convene at the Munich Security Conference to debate critical security challenges, including the rise of illiberalism globally.

Strong transatlantic relations and global peace and security are top priorities for Norway. Because of this, Norway will be represented in full force at the aforementioned conferences.

Promoting stability requires a broad set of measures, including targeting economic and social development, providing assistance to forge good governance and facilitating political dialog. And in some cases, it may also require military contributions.

Some military contingents are deployed as part of our strong commitment to NATO and the transatlantic relationship, a cornerstone for Norway's security. Others operate within the framework of the United Nations or in cooperation with the European Union. Norway has stood alongside the US and NATO in numerous international operations. We have contributed to operations in Lebanon, in the Balkans, in Mali, in Afghanistan, Libya, Iraq and Syria, to mention a few. Since the Second World War, more than 100,000 Norwegian soldiers have participated in more than 100 international operations all over the world.

Norway is still actively contributing to support the Afghan government's efforts to stabilize the country and to counter terrorism by providing Special Forces to Kabul with a focus on capacity building. Since 2007, Norway has established, advised and supported a national Afghan Counter-Terrorism Police Unit. Every day they target terrorist networks, prevent attacks and respond to attacks against civilian and government targets. During my tenure as ambassador to Afghanistan, I witnessed firsthand the success of this cooperation. I visited several bases and spoke with the soldiers about their experiences. I also met with the "Afghan Crisis Response Unit" that, for the first time ever, included Afghan women training and participating within the Special Forces. This was a groundbreaking development, very important with regard to the future success of the country.

We also take part in US-led counter -ISIL coalition operations in Iraq and Syria. The coalition campaigns against ISIL are yielding considerable results. ISIL and its so-called Caliphate are rapidly losing territory.

As part of this campaign, Norway deployed a contingent of Special Forces to Jordan, in order to train, advise and assist local Syrian Sunni Arab forces to regain territory currently occupied by ISIL in southeastern Syria. Norway has also provided a military contingent operating out of Erbil (Iraq), training Kurdish Peshmerga forces.

The Norwegian government is considering future contributions to ongoing operations, as well as assisting NATO's mission in Iraq. As new challenges appear, we stand ready to join our NATO allies in sharing the burden and participating in joint efforts.

The offensive operations against the strongholds of Mosul and Raqqa are challenging and will take time, but we will succeed. To ensure lasting stability in Iraq and Syria, inclusive political processes are necessary.

Unfortunately, failed states and poorly governed areas along NATO's southern flank remain a major security challenge both to Europe and to the US. As a contribution to address these challenges, Norway provided a tactical airlift detachment to the UN Operation in Mali (MINUSMA) throughout 2016. Moreover, Norway also provides personnel to MINUSMA and UN's first modern Intelligence Unit. The establishment of this unit has been a significant success.

As a member of NATO, Norway takes its commitment to its allies seriously. We also take our commitment to security and defense seriously. As part of the Alliance's enhanced Forward Presence, Norway will, in May, deploy a mechanized company to Lithuania, as part of the German-led allied battalion. Norway is also providing a small force contribution to NATO's British-led Very High Readiness Task Force for 2017. We currently also sustain a limited participation in several other operations, including the UN Mission in South-Sudan, NATO's operation in Kosovo and the NATO HQ in Sarajevo.

Throughout Europe, Norway assists to ensure day-to-day situational awareness and to rescue operations. We contribute on a regular basis to NATO's Standing Maritime Forces (SNMG and SNMCMG) by providing the command ship and the commander to SNMG that consists of frigates and destroyers. Every six months we join NATO's Mine Counter Measures Group to conduct minesweeping and clearance in Northern European waters. Moreover, in response to the increasingly challenging influx of migrants from the Middle East, North Africa and parts of Asia, we are participating in the EU-led maritime operation in the Mediterranean, which patrols the southern perimeter of the EU's border.

Our Armed Forces maintain a high, but often overlooked level of peacetime activity at home that, in its own way, is an important contribution to transatlantic security. 24/7/365 the Norwegian Navy, Coast Guard and Air Force patrol vast Arctic Ocean areas over which we have jurisdiction. In total, these maritime areas are equivalent in size to 90% of the Mediterranean. Norwegian fighter jets are on 15 minutes Quick Reaction Alert on behalf of NATO. Our military border guard patrols and monitors the border with Russia. We maintain a robust posture in our neighborhood, which is important for stability in this area. We are NATO in the north.

Norway's continued commitment to peace and security will remain one of our top political priorities. As international developments evolve and unfold, I hope that by sharing this information I'm also offering a better understanding of my country's military contributions around the world in order to maintain peace and security.