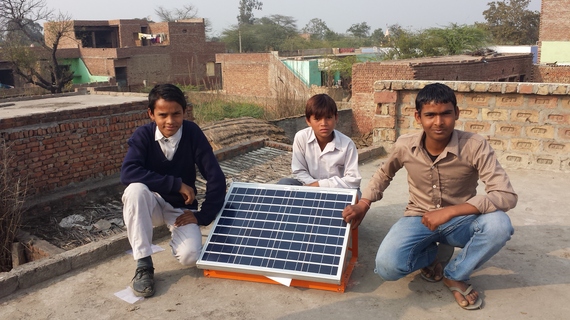 Against the fervent protests of global coal lobbyists, Norway is considering divesting from coal while doubling down on investments in renewable energy and sustainable development internationally. These unprecedented initiatives could unleash billions in investments in renewable energy around the globe. This is great news, but we can't forget that how we get people access to solar and other clean energy is just as important as whether we deploy them at all. That's why Norway should include a commitment to transition energy access investment away from large-scale, centralized energy projects to small-scale, distributed clean energy like off-grid solar that turns on the lights while benefiting local economies.

No country is better placed to take advantage of these resources than India. Current estimates peg the Indian off-grid solar market at three gigawatts. That's enough to get 75 million off-grid homes powered with basic services like lighting, mobile phone charging, and fans. But right now, Indian banks have a cap on investments to the power sector, limiting the solar industry's access to finance because it's all going to the struggling coal sector. It's hard for the solar industry as a whole to get finance from public institutions compared to other energy sources, and it's particularly hard for off-grid companies, given the banks' current predisposition to support large-scale, centralized solar arrays.

That's why Norway could soon be in a position to help India's off-grid solar sector. If high-profile calls from leading solar entrepreneurs like Jigar Shah, founder of solar technology manufacturer SunEdison, are heeded, Norway could make $500 million available to off-grid renewables around the world. If this money is used in a strategic way, as loan guarantees that unlock billions more, we could see this sector explode like the mobile phone business in the early years.

Already the off-grid solar lighting market in sub-Saharan Africa, aimed to improve access to better lighting in areas not yet connected to the electricity grid, is almost doubling every year, according to an international program called Lighting Africa. In Bangladesh, renewable energy company Grameen Shakti and others are deploying 30,000 to 40,000 solar home systems every single month. But India is already falling behind these fast-moving markets, even though states like Uttar Pradesh are housing a hotbed of distributed solar activity.

Despite the solar industry's initial success in parts of the world, these markets are suffering from a lack of finance, making it hard for entrepreneurs to raise the money they need to get up and going. That means billions wait in the dark, living in energy poverty, the term for the situation that so many in developing nations find themselves: negatively affected by a lack of energy, use of dirty fossil fuels, and inefficient time spent collecting fuel to provide for families. One quarter of that population resides in rural India with hundreds of millions more only receiving a few hours of electricity from the grid every day.

Luckily, small amounts of financial support from mainstream, hard-nosed investors have helped to transform investment in the sector in just the past six months. But financial capital from the private sector isn't enough. We need the scale that only public institutions can bring. That's why India needs this commitment from Norway to carve out support for off-grid clean energy access.

Norway has already heard the call for a $500 million fund from 20 of the world's leading off-grid clean energy entrepreneurs. That's why the government's Energy+ Initiative has supported India's national solar mission to provide solar in off-grid areas. Now it's time to actually unlock this money and end energy poverty in India once and for all.

As Shah said, we have a once-in-a-generation opportunity to do something that matters. The eradication of energy poverty is an essential step to the education of children, effectiveness of health care, and attainment of the millennium development goals. Around the world, there are over one billion reasons for Norway to help make this happen. India is home to 300 million reasons alone. It's time Norway helped provide the investment India's entrepreneurs need to turn the lights on.