Until I was about ten or so I had never really given my nose much thought. I looked at myself in the mirror from time to time to adjust my butterfly clips or harass a loose tooth, but beyond that my appearance wasn't really something that was ever on my mind. But in fourth grade I saw a picture of myself at a sleepover. It was a closeup of my face. I knew it was me because I had been the idiot with the ice cream all over my face, but it took me a while to figure it out. It was a side of myself I had never met before: the profile side.

My nose looked unfamiliar because I had only seen it from the front before, but now at this angle, I could see that it was growing in like a twisted tree trunk with a giant bump at the center. I felt dumb for even thinking that I had looked decent all this time. I wondered why people were even nice to me when I looked like such a freak show.

Soon after, I got braces, boobs and more freckles, which didn't really help matters. I also made the realization that I was a heavy breather and sounded like a chain smoking serial killer in a B movie or that creepy kid in "Hey Arnold." This is because my upper lip doesn't really reach my lower lip, another side effect of having a large nose, in addition to the insecurity problems -- great! Luckily, no one ever teased me about my appearance. My poor self-esteem pretty much turned me into a mute so I think my classmates kind of forgot about me. But throughout junior high I was convinced that there must be some big ongoing joke about me and all everyone could think of when they saw me was, "that nose!"

I started to work on my big nosed-girl camera "tricks," like how to make my nose disappear in Myspace photos by holding the camera really high above my face. Or if there were a boy I liked, I would constantly turn my face so I was looking at him straight-on (since I was an insecure pre-teen who could not make eye contact). I thought that somehow if I did these things, people would never see my nose. But I found that despite all my attempts, my big nose was not as easy to hide as my stretch marks or cellulite; it's not like you can put a boa on it or something to spruce it up. It's right there as is for everyone to see all the time.

As much as I worried about my nose privately, I never talked about it out loud. I was too embarrassed. When I was a camp counselor in the 10th grade and a seven-year-old told me, "you have a nose like this," and drew a Pinocchio-like schnoz on a princess in her coloring book, I cried secretly in the bathroom. It took me until college to say anything about it. When I finally confessed my inner struggle over dinner with my mom (who has the same Italian nose I do) a couple years ago, she told me, "maybe you should get a nose job." It was never something I had even considered before, because, well, my parents aren't rich and no one I knew had cosmetic surgery besides a mole removal. 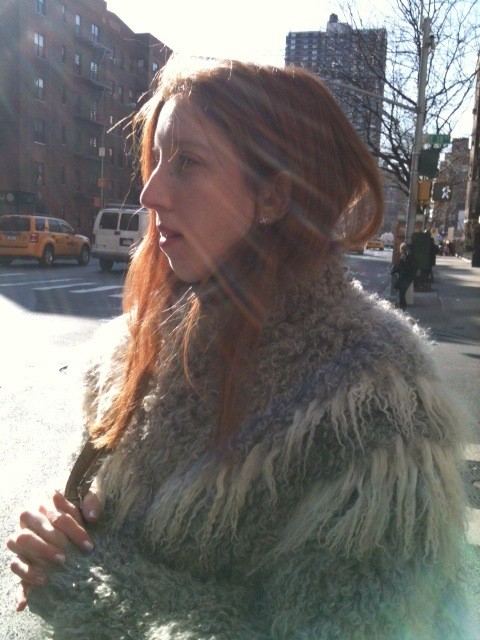 My nose & me catching some rays

So I did what any sane person does when they need medical advice -- I went to Wikipedia for answers. I got pretty freaked out by what I saw: bloody nostrils and probing surgical instruments. I kept going to more websites for cost estimations, shoddy before and after pictures and plastic surgeon profiles. I did this for a whole summer. I was ready to take out a loan if I had to, because I thought, "IT WOULD CHANGE MY LIFE" -- maybe.

I was pretty set on the whole deal until I met my current best friend, who said I was "absolutely crazy" for even thinking about changing my nose, because she thought I was "beautiful." Her little brother also had a pretty profound thought on the topic: "plastic surgery is awkward." After thinking more and seeing a lot of celebs go under the knife with pretty weird-looking results, I finally had to agree with them: plastic surgery is pretty "crazy" and "awkward."

I can't say accepting my nose has been easy. Every time I think I've forgotten about my nose, I see a crappy cell phone pic at a bad angle on Facebook. But luckily I have people in my life to tell me I'm acting a fool. That's what friends are for.

Some celebrities with distinctive noses who are still hotties: