'Officer,' the drunken motorist asks the policeman in the hoary old joke, 'are there penguins as tall as humans?'

'No,' the officer replies.

'Oh dear,' the driver hiccups, 'then I must have run over a nun.'

Penguins, though, are much more liable to be likened to men wearing tuxedos than nuns, or rather the other way round: men in tuxedos are much more likely than nuns to be said to be wearing penguin suits. 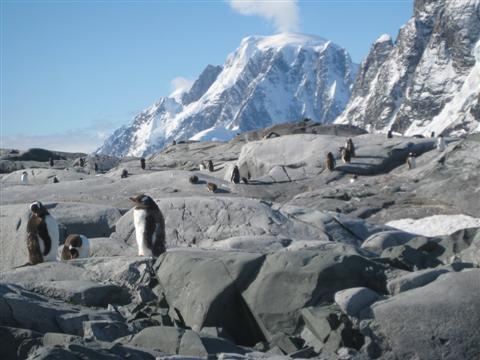 Penguins in Antarctica
Be that as it may, if you think our fashion-conscious flightless friends just stick to plain vanilla black and white in well defined segments as they waddle about, you are doing them, or rather their sense of fashion, a grave injustice.

Some of the penguin fashion shows Yours Truly has attended in Antarctica, the Falklands and Galápagos Islands:

Gentoo Penguin: among the most common to be seen in Antarctica. 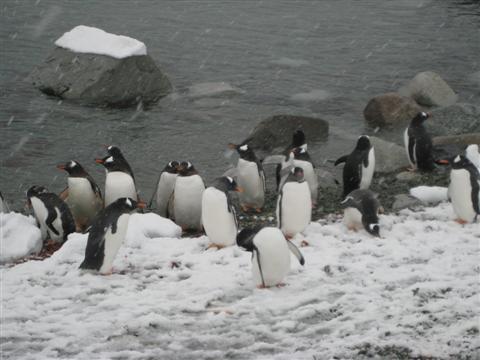 Gentoo preparing for Project Runway on Antarctica's Danco Island
Sports a white strip above the eye that rather resembles those trendy fascinators such as the younger members of Britain' s royalty favour: see Katherine Duchess of Cambridge at her son's baptism or the Princessses Beatrice and Eugenie at cousin Prince William's wedding. 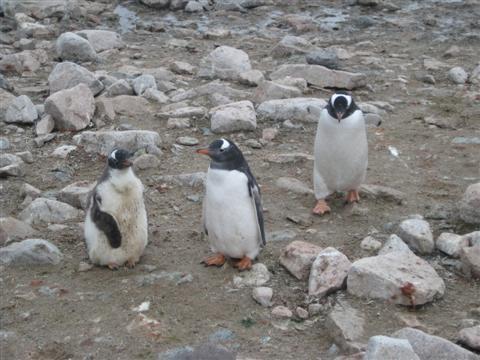 More Gentoo penguins
Maintains dignified poise at all times, even when ruffled by wind. Unfazed even when my wife Rivka slipped on disembarking from a zodiac and fell flat on her arse in a three foot pile of their poop. 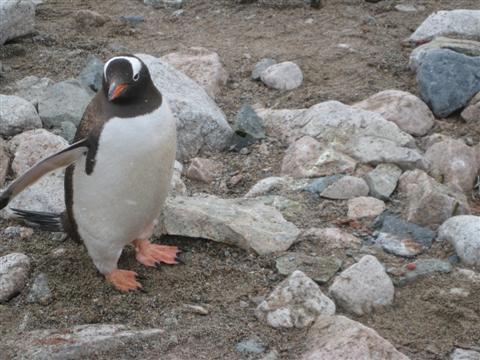 How's that for poise
Apparently owes its name for reasons that are obscure to what was once an old Anglo-Indian term distinguishing Hindus from Muslims. Is the third biggest of the penguins, reaching a height of two feet six inches and a weight of 12 pounds. 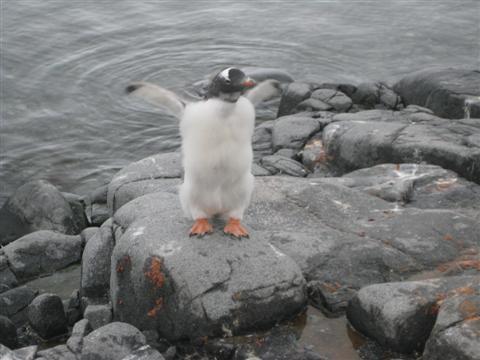 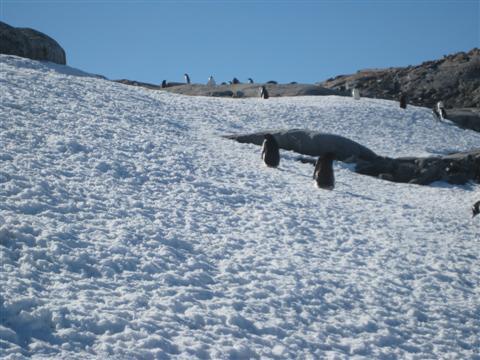 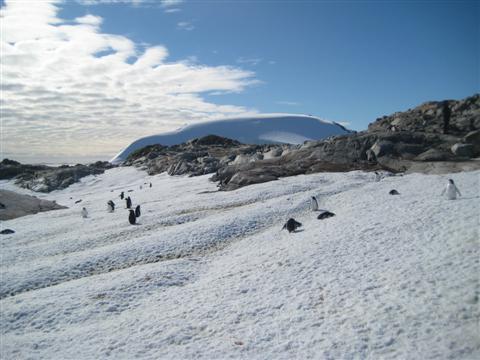 Afternoon stroll
Split off from the Gentoo 19 million years ago, adopting a more sober fashion trend. Between one foot six and two feet six in height; weighs between seven and 12 pounds. 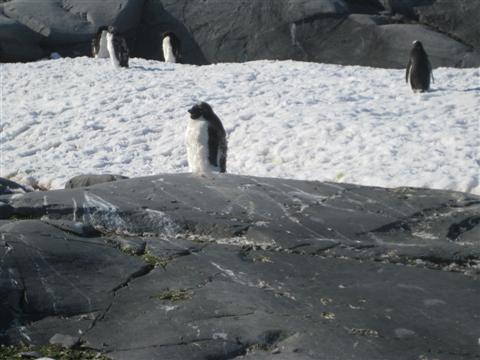 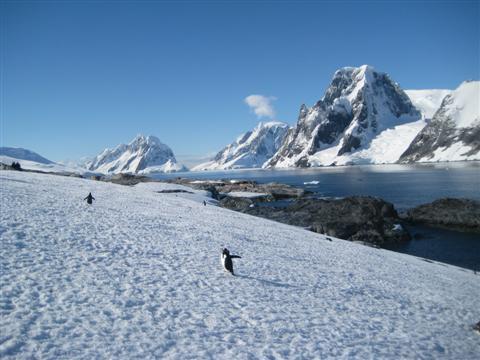 Chinstrap Penguins: no décolleté here. If anything, it looks as if the white wing collar has been flattened back against the neck. 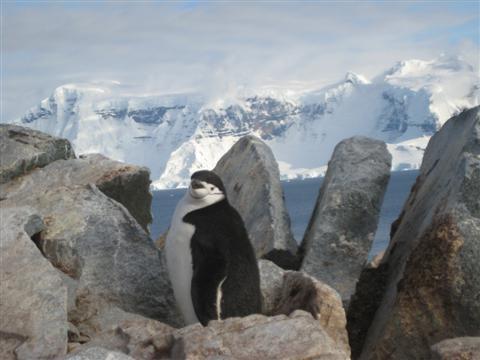 Chinstrap penguin on Antarctica's so-called Useful Island
A thin black stripe running from below the bill and under the eyes to a very black head is responsible for the bird's moniker. The bill is black and the feet pink. 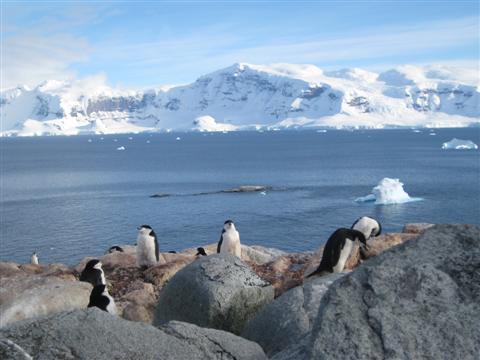 More Chinstraps
Apparently broke off from the other two 14 million years ago. Can reach over two feet tall and weigh in at 12 pounds. 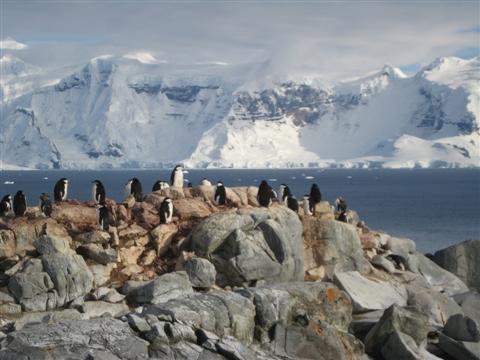 Galápagos Penguin: only penguin living naturally north of the Equator, benefitting from the cool temperatures of the Humboldt and Cromwell Currents as they scamper over the volcanic rocks of the Galápagos Islands of Isabela and Fernandina. 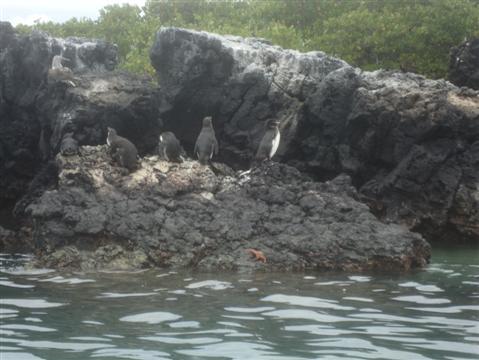 Galápagos penguins on Isabela
Sports a somewhat spotted white band curving round the eye and ear-coverts to the throat, offset by an arching black band just below the top of the white dickey, in lieu of a tuxedo's bow. 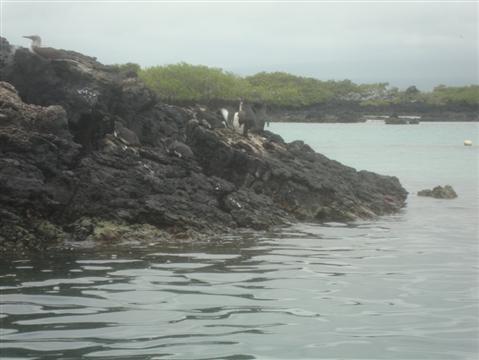 More Galápagos penguins
One of the smallest of the species, the Galápagos is a about a foot and a half tall and weighs in at about five and a half pounds.

Magellanic Penguin: has the courage of its convictions, showing a design similar to that of the Galápagos but in much bolder detail. 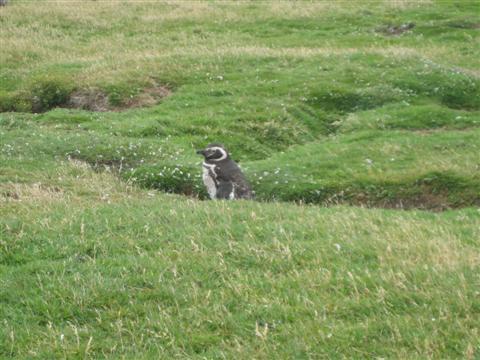 Magellanic penguin on Falkland Island of Carcass
Sports a broad white band running from behind the eyes and ear-coverts to form a narrow choker around the neck, above the black band of its cape. Another black band just below the top of the white dickey curves down the sides at an obtuse angle to disappear under the flippers. 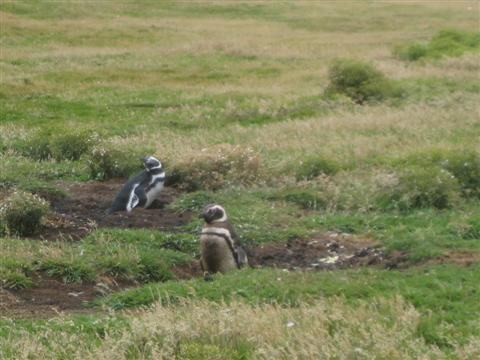 More Magellanic penguins
Reaches a height of two to two and a half feet and a weight of between six and 14 pounds. Frequents the southern coasts of South America and the Falkland Islands 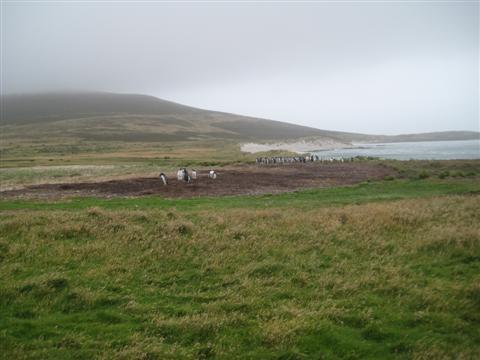 Penguins on the march on Carcass Island

Rockhopper Penguin: a true trend-setter. Ages before Justin Bieber and millions of others sported spikey hair, the Rockhopper was proudly hopping about the rocks of the islands north of Antarctica, from the Falklands to New Zealand showing off its spikes. 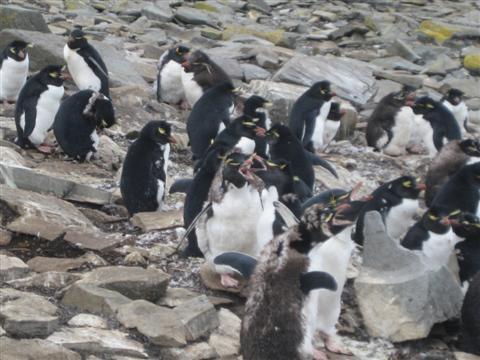 Rockhoppers crowding rocks on Sea Lion Island in the Falklands
And not just any black spikes to match the colour of its head, but cheeky yellow ones protruding saucily out from the electric-shocked black feathers and the bright yellow streaks above the eyes. In contrast its white dickey is quite sober. 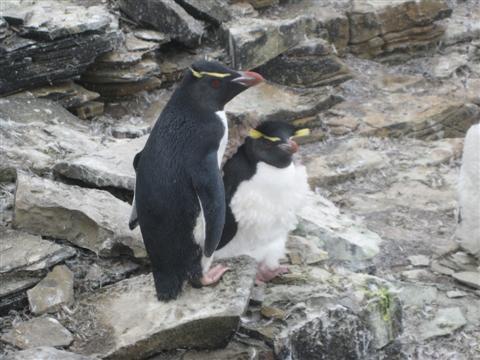 Rockhopper preening
The Rockhopper is among the smaller penguins reaching just a foot and half in height and usually weighing no more than eight pounds. They continually argue with each other, squawking, snapping and jostling as they hop up and down the rocks - just like the U.S. Congress or the House of Commons. 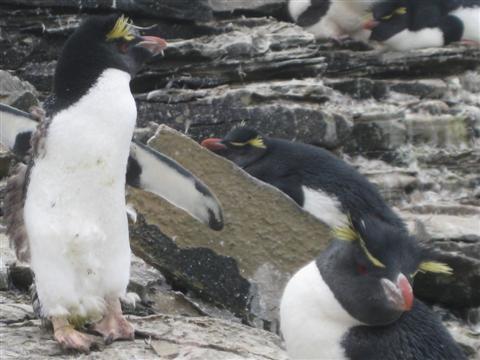 Emperor Penguin: the tallest and heaviest of all penguins. OK I won't cheat; I didn't see any of these but National Geographic says they're almost four feet tall, can weigh anywhere from 50 to 100 pounds, and dive to 1,850 feet, deeper than any other bird, staying under for more than 20 minutes. They have a yellow glow around the gills and live in Antarctica and on South Georgia.

King Penguin: here we have the real dandy, the Beau Brummel of the species. Though smaller than the Emperor, the colouring appears bolder. 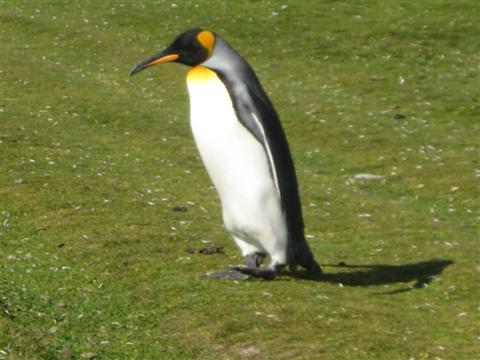 King penguin in dignified repose on Volunteer Beach, East Falkland
Talk about a royal flush! They are very regal with oval patches on their heads in various hues of yellow and orange, and a similar glowing colour on their necks, much more ferosh than those of the taller Emperor, at least as the latter appears in photos. They also sport an equally bright ochre streak on their bills. 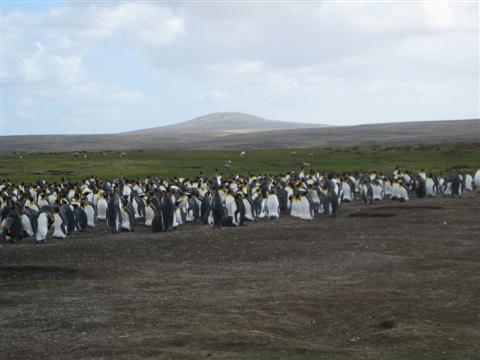 Major convocation of King penguins
The second largest of the penguins, they can reach three feet tall, weigh 36 pounds, and their dive depth limit is about 1,000 feet. 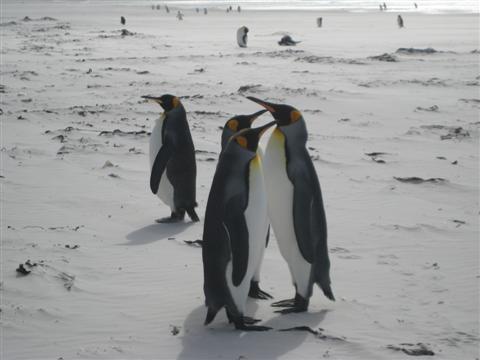 A walk on the beach
Their chicks are huge balls of furry brown down, compared by some to the bouffant bearskin hats worn by Her Britannic Majesty's grenadier guards. The kids are very noisy and continually pester their parents for more food. 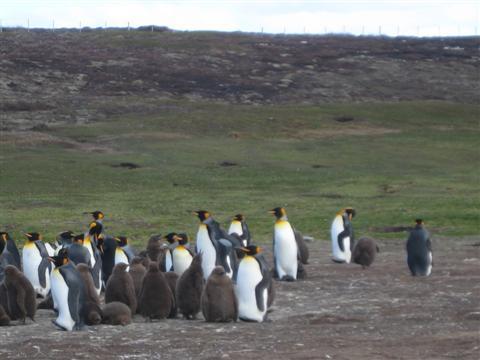 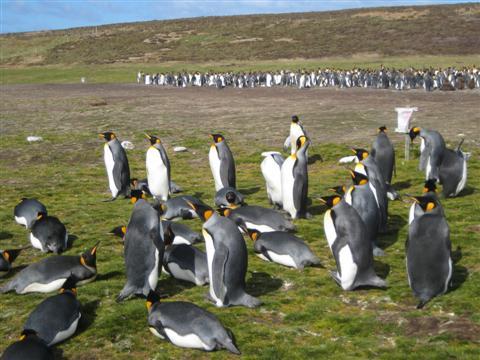