When Sean Aronson began telling people that he was filming a short documentary about great white sharks, he received two typical responses.

"There were always those people who were excited-- the shark fanatics. They live and breathe sharks. But there were also a lot of people who sighed and asked, 'what can be said that hasn't already been said?' It's kind of like celebrity news. You have people who can't get enough of Brad and Angelina and then you have people that are just completely turned off from it. White sharks have gained that kind of notoriety."

Now that his film has been released, Aronson thinks he has added something valuable and new to "what has been said" about great whites. Titled White Shark Cafe, his film refers to an area in the Pacific Ocean where scientists recently discovered that great white sharks gather frequently for unclear reasons. Aronson used this compelling mystery as a means to highlight advances in great white shark research.

He came up with the idea while attending a graduate level journalism program at the University of California-Berkeley, where he also spent a lot of his free time learning to surf. "From the moment you pick up a surfboard in Northern California you hear about sharks. You consequently think about it every time you go surfing. My original film was going to be about surfers who were attacked by great whites. But I discovered that this kind of film had already been made. So I thought about how I could make a film that hadn't been done before."

Contrary to what many of us think, great white sharks are not well understood animals. In the past five years Aronson claims that we have learned much more about them than we did in the past 30-50 years. "It's really a turning point in terms of great white shark research. That was an exciting thing from a filmmaker's perspective, and everyone's heard of the great white shark --every little kid has heard of it. And yet despite its fame, little about it is known."

This paradox drove Aronson to make a film that would help people view great white sharks as fascinating animals in spite of the fact that they have predominantly been portrayed as killers in popular movies like Jaws. "My main goal was to present this animal in a way that we had never seen it--which was swimming around in its environment, not with its teeth bared, not bloody, and not attacking. Which of course is about 95% of the great white's life. Through research and the study of this animal, we might be able to allay some of our fear through greater understanding. Rarely does knowledge instill more fear." 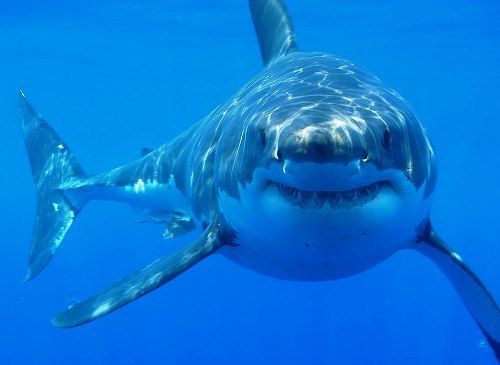 Aronson notes that great white sharks have been both feared and revered by cultures worldwide for thousands of years. He says that it is largely thanks to new technology that we've been able to understand them better. For instance, while once thought to be coastal animals, it is now known from satellite tags inserted into some individuals that great whites migrate over thousands of miles and make deep dives. This new information helps soften their image he claims, as well as more playful approaches toward educational efforts such as a Facebook Fan page for a shark named Omoo whose movements were tracked for some time online.

He also mentions that California's Monterey Bay Aquarium has had the most success housing great whites to date and has given the public an opportunity to see them in a more peaceful light. The aquarium releases the sharks when they no longer live healthy lives in captivity, which is usually not very long. Despite this limitation, the first shark the Aquarium hosted in 2004 was seen by almost a million people. The Aquarium's executive director exclaimed that it was "the most powerful emissary for ocean conservation in our history."

These efforts to make great white sharks more appealing are crucial given a rapidly accelerating global decline among shark species. It's estimated that 150-200 million sharks are killed each year, putting approximately 79 out of 350 species in danger of extinction according to the International Union for the Conservation of Nature. Many countries have put laws in place that will help protect great whites and other species from commercial fishing, but greater understanding among the public of the need for conservation is necessary for sharks to survive.

Great whites are in alarming trouble among even sharks. A recent study suggests that there are currently fewer than 3,500 great whites worldwide, making them more endangered than tigers, another emblematic but imperiled species. The decline of great whites has been precipitous, with the population dropping by an estimated 90% in 20 years.

Even though Aronson's goal to show great white sharks in a new light was admirable, making a film about a large, elusive underwater animal was not without its challenges. With a small budget, he made an early decision to not rely on filming the sharks underwater as the primary way to make the film. He also realized that filming the sharks in Northern California would not be visually stunning because its ocean water tends to be foggy. So instead Aronson shot scenes in places like the Monterey Bay Aquarium and included footage of his discussions with scientists, as well as an on-sea expedition to tag a great white shark. To complement his own footage, he purchased some beautiful scenes of sharks swimming near the Guadalupe Islands of Mexico, an area where great whites congregate and are easy to observe. 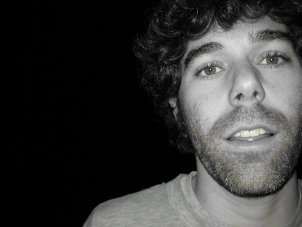 focusing on local stories from Hawaii.

Aronson suggests that making his film now was more realistic than it would have been 10 years ago because of the research. "Great white sharks are hard to study in captivity. Despite their efforts, so far aquariums have not had much success housing great white sharks for more than a year or so. So a challenge I faced as a filmmaker was a parallel challenge to one scientists face, which is where to find this animal and how to document it. But thanks to the research, at least now we know where the sharks are more likely to be. That combined factor along with my approach to making the film allowed me to succeed."

After completing White Shark Cafe, Aronson traveled to film festivals to ensure that the short 24-minute documentary found an audience. In January, Amazon.com began to offer the documentary with its Video on Demand Service, which should greatly expand the film's reach. This is great news for sharks, as Aronson says that the reaction to his film has been overwhelming positive. "The best success as I view it has been talking to people who told me they never really had any interest in sharks. Many of them tell me that after seeing my film that now they do. That's very rewarding as a filmmaker. I think it also means I've had some success at helping people understand that great white sharks are a majestic animal beyond the misperception that it is a predator to be feared--and that's a good thing."

With fewer than 3,500 great whites left, this message is more relevant than ever before.

If you would like to see White Shark Cafe, it can be viewed at Amazon.com or purchased from CreateSpace. More information can be found on the film's official site, by clicking here.