As we here at Casa López prepare for our son, the Juban Princeling, to turn two years old in less than two months (!), I've been thinking a lot about my little guy's milestones. Not the milestones you read about in Dr. Spock or other parenting guides. I'm talking about the other milestones. The ones parents don't usually talk about, yet clearly draw a line between babyhood and childhood.

In our case I knew the exact moment when the Princeling went from sweet little baby to dirty little boy when he got very sweaty one day, but instead of smelling like sweet baby smell he stank of gross little boy.

Funnily enough, there wasn't a spot for that in his baby book. No, "Day my son went from having cute sweat that I like to smell, to smelling like old sneakers." No, "Of course the day he decides he hates bath time and acts like the water is full of piranhas and dirty needles is also the day he starts REALLY needing a bath." 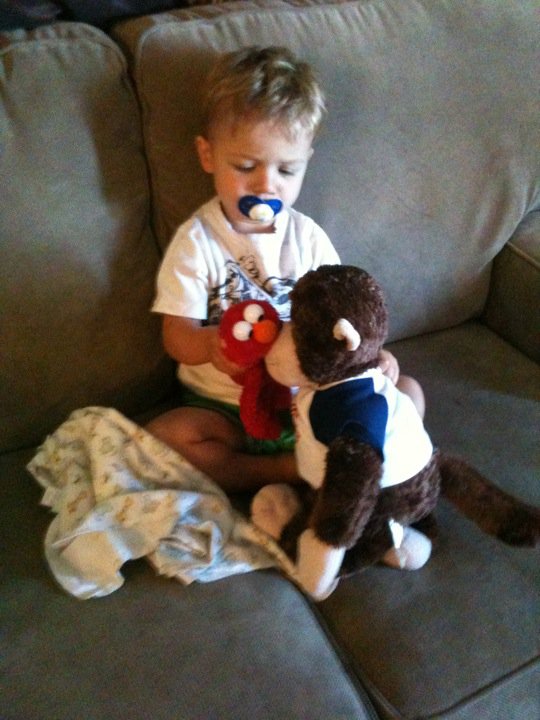 He may still need his paci, but the Juban Princeling is not too young to know that it's OK for two boys to "like" like each other. In this case, he presides over the marriage
of Elmo and a stuffed monkey called Eric Skeeter (as in rhymes with Derek Jeter, ha ha), which was a gift to us from our Canadian friends.

I brought this up to my other mom friends, some of whom have kids the Princeling's age, but some of whom have kids who are already much older. And by "much older" I mean they are well past the age when dumping soapy water over their heads can count as "bath time." I found that, thankfully, I'm not the only mom who notices those unwritten milestones of childhood that mark some sort of soft but important transition for our kids.

A friend of mine from high school, whose kids are grade-school age, told me that she noticed her kids becoming more grown-up the first time they lashed out at her in anger using the worst words they knew at the time, like, "I'm not your friend," "You're the worst mommy ever," and "You're not invited to my party!" Ouch.

Another friend with school-age kids -- which makes me feel old because I've known her since she was the age her kids are now -- tells me she knew her kids were growing up when they called her out on her little white lies, like the fact that they KNOW there are no alligators hiding in the closet waiting to nip at bad little boys.

Mrs. Rudy, whose son is just three months younger than my own Princeling, told me about the first time Rudy, Jr. stood on their couch and looked at her with a challenge that clearly said, "Do you think you can get here fast enough to stop me from cracking my head open on the coffee table I'm about to leap onto?" Ah yes, I know that one well. The Princeling is a little monkey, just like his Uncle Gilligan, and loves to climb. Which means he also falls a lot. Usually onto his head. Toddler heads are made of rubber, right? ...Right???

Rudy's younger brother, Little Rudy, has a son we'll call Little Rudy 2, who just turned three years old, and likes to recap his day before falling asleep. "Then Grandpa said this. Grandpa is so funny!"

Yet another mom friend of mine from Back In the Day says that she knew her girls were no longer helpless little babies when they started to play nicely with one another so she could get stuff done around the house. Awww. That almost makes me want to hurry up and have a sibling for the Princeling. Almost.

My husband noticed the first time the Princeling got annoyed with him when my husband when to give him a kiss and got in the way of "Sesame Street," so the Princeling pushed him away.

One of my Knottie Hottie friends, whose Jewtalian little girl just turned one year old this summer, has begun to understand what people say to her. She also now attempts to dress herself.

A writer friend of mine tells me about when her kids started using words she didn't teach them. When I was a little girl most of those words were generally naughty...

But my absolute favorite, hands-down, is my friend who told me that the day she knew her son had moved on from baby to little boy was the day she noticed him lean to the side in order to let out his farts. Also? The same mom told me that her son personifies everything. As in, "Hi, Big Poop! How ya doin'?" I don't even have a witty response for all that, as I think that all speaks for itself.

As I told my husband the other day, while I'm in no hurry for the Princeling to grow up, it's exciting and fun to watch him turn into a real person day by day. I can't believe I'm going to be the mama of a two-year old soon. Ah, time flies.

Mothering For Your Amusement and Entertainment