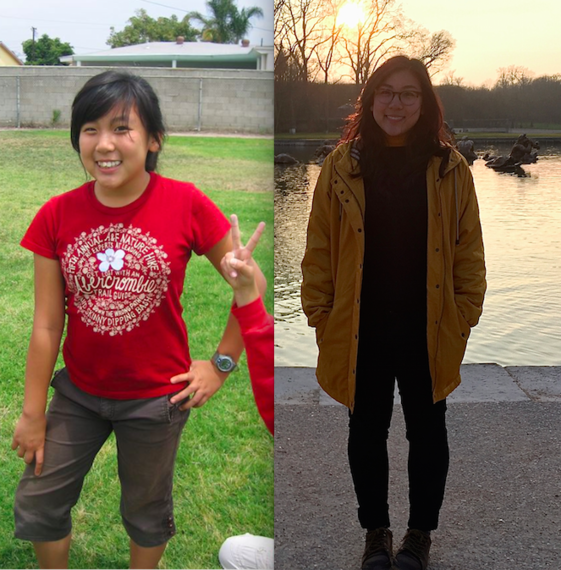 I attempted my first crash diet in the fourth grade. I don't remember exactly what prompted it, but I wrote a diary entry in September 2004 detailing my frustration at watching my family members eat what they wanted at the dinner table while I had to settle for "eating just leaves." A decade later, I cringed reading the words of my nine-year-old-self attempting to starve herself into perfection.

Raised by a Korean family and growing up in America, I was ushered into a crux of Western and Western-influenced Eastern ideals of beauty. As many other children do, I wanted to be accepted -- in this case, by both worlds. The only things standing in the way of this acceptance was not having big eyes, long lashes, pale skin, straight pearly whites, lithe body, thin nose-bridge, tall cheekbones, a river of black hair, soft but defined jawline, piano-fingers with lunar nails, or a demure disposition.

Luckily for me, I didn't need to aspire to be a "type" or want to look like "x" -- I had a hyper-specific checklist thrust upon me, with hallmarks of worth so clearly indicated that a nine-year-old could understand it.

Raised by a Korean family and growing up in America, I was ushered into a crux of Western and Western-influenced Eastern ideals of beauty.


Yet I remained a short, tan, chubby fourth grader who liked her hair in a ponytail, bit her nails compulsively, and enjoyed flicking dried mud from her calves after a romp around the field. This fourth grader liked cartwheels, Polly Pockets, finishing timed tests before her peers, Saturday morning toast, pulling grass out of the ground, and reading library books. Before long, she decided she liked "eating just leaves."

In the seventh grade, fashion became a center-stage topic of conversation. I became even more aware of how much space my body took up in a t-shirt, a pair of jeans, and so on. I had exactly one meal before the first day of school so that I could look presentable at the new school I'd be attending. I dared not step into the sun too much throughout the summer, fearing my skin would tan and make me darker than acceptable. After becoming the subject of one too many playful comments from family such as "Judy, you look like a peasant who's been working the fields all day," SPF was my best friend.

In 10th grade, I attended my first high school Winter Formal. My meals the week before consisted of cups of apple juice accompanied by some fruit. I was swept off my feet by Tumblr's infamous "Thinspiration" movement: a tag filled with disordered eating tips and unrealistic images of thin white women accompanied by "thinspirational" quotes such as, "Nothing tastes as good as skinny feels." Their eyes sank into their heads in a way that made them look doll-like, and I began to hate that my eyes only folded halfway -- just shy of a Western double-lid.

That night, as my mother cooked dinner in the kitchen, I sealed myself into the bathroom with a bottle of Elmer's glue and a toothpick in my latest attempt to reshape the way my eyes looked. They needed to be bigger, more alert. A week before the dance, wrestling a strapless dress two inches short of being zipped up in a Windsor changing room, I glared at myself with my almond eyes and thought: you could be so many things if you stopped being so lazy.

My junior year, I had a calorie-tracking diary in which I'd log every single bite I put into my mouth so that I could calculate my daily allocation of self-fulfillment every night. When I discovered online apps that would calculate my daily self worth for me, I was overjoyed. What a wonder the digital age was! As the pounds went away and the Hallyu wave seized America, I pined for the recognition the Korean stars received. The sea of long, pale legs in K-Pop music videos was not only mesmerizing, but also motivating. I was already so close to being like them -- I was Korean, a girl, and liked to dance. All I needed, all I truly needed, was to look the part.

In a time when loving yourself is a political act, it is even more imperative to seek your own peace because in that peace, there is revolution.

Stepping back, there are so many little messed up things that slip past our radar on a day-to-day basis. Women are always encouraged to be small ("oversized" things being cute, celebrity status quo, weight loss pills, crossing legs, clothing sizes hitting a literal "double zero") and take up less space in comparison to men, who are encouraged to be take up lots of space (muscular, broad shoulders, "power" poses and seating, etc. Isn't it strange that it's second nature to pose yourself and monitor your body every couple of seconds as if you were meant to be a nice object to be looked at approvingly? I've only fairly recently found that these things aren't and shouldn't be second nature.

Fact: we live in a society that capitalizes on insecurity. I was never meant to gain the acceptance of both my worlds because existing between them guarantees someone a source of revenue. I am both comforted and furious knowing countless others are in the same place.

However, I find hope in the resilience of the Asian-American women in my life who strive to rise above and beyond the world of in-between despite being made to feel a unique flavor of worthlessness all our lives. It makes me believe that we were put on this world to do so much more than pick ourselves apart.

In a time when loving yourself is a political act, it is even more imperative to seek your own peace because in that peace, there is revolution.