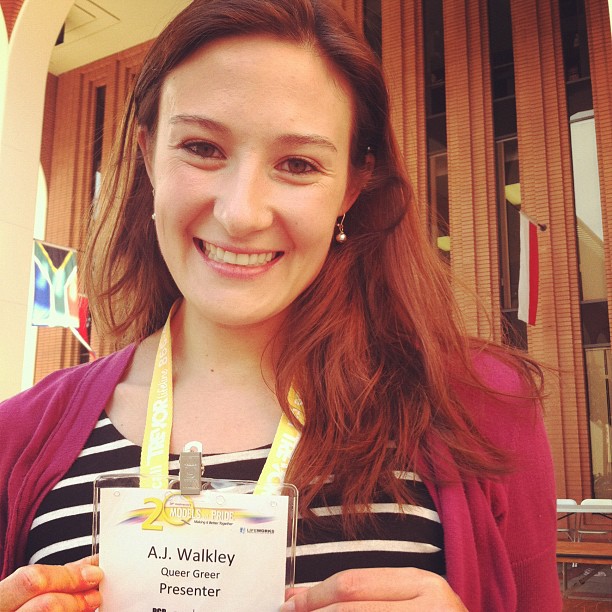 I had the honor of presenting a workshop at the 2012 Models of Pride Conference held at the University of Southern California this past Saturday, Oct. 13. Speaking about bisexuality through the lens of my young adult novel, and about the differences between coming out as bisexual and coming out as lesbian or gay, my workshop was titled "Queer Greer: Getting Bi in a Gay/Straight World."

I was thrilled to be part of the event, which was in its 20th year, and was eager to see what other presentations for bisexual youth were being offered. As I went down the long list of 112 sessions, I had to do a double take, then a triple take. Could it really be that there was only one other seminar specifically for bisexuals? It was true: Only two out of 112 workshops spoke directly to bisexuality. (Similarly, in 2011, just one workshop out of 78, titled "But I Don't Want to Pick a Team...," catered to bisexual conference goers.)

When speaking with an organizer for the conference, I learned that there were few bisexual-related workshop proposals that came through for Models of Pride to choose from this year; although other presentations historically have been inclusive of "pansexuality and/or fluidity, and queerness, and bi-ness to some degree, as well," it's been the case that those who run the conference typically do not receive many proposals for bisexuality-themed workshops.

After my session ended I asked a couple of the students who attended how they felt about only having these two options. In their responses I sensed frustration and disbelief, mirroring my own. They wished there had been more, but two was better than the solitary option of 2011, and that one option was better than nothing.

While it's virtually impossible to acquire completely accurate statistics about how many people in a given population are lesbian, gay, bisexual or transgender, there have been studies that show that bisexuals make up a greater percentage of the population than do people who identify as lesbian or gay. One of the reasons it's difficult to make anything of such stats is that many bisexuals don't identify as such, even if their sexual preferences would otherwise make "bisexual" a perfectly legitimate label for them. "Bisexual" remains a dirty word for many, for unwarranted reasons, mainly misconceptions about promiscuity and the notion that "bi" reinforces the idea of a male-female binary, when in fact it can be seen as referring to being attracted both to people who are "the same as me" and to people who are "different from me."

Thanks to a high degree of participation on the part of the students who attended my workshop, I was overcome with the feeling that today's youth need more spaces and opportunities to speak out about bisexuality, questioning their sexuality and their experiences with the abuse they frequently endure over the course of coming out of the proverbial closet. Some of the students in my seminar voiced misunderstandings (e.g., not knowing that bisexuality is inclusive of all genders); others spoke of their frustration with a lack of understanding from others (e.g., the assumption that all bisexuals are "sluts" who can't be monogamous); and still others shared stories filled with pain (e.g., walking in on a girlfriend who had just attempted suicide). I felt for them all and shared my own perspective and experiences in an effort to connect better with each student and show them that they are not alone in what they are going through.

Once the workshop was over, several students came up to thank me for presenting, saying that they needed this opportunity to talk about these issues. One girl even asked if I could support her as she figured out how to come out to her extremely religious family. (I gave her my email and told her to write whenever she wanted.)

I left Models of Pride feeling like I had helped these kids, even in a small way. I also realized just how important such events are for the youth of today, as well as the need for more out bisexual activists to take the reins and propose more of these types of workshops. We have a responsibility to make young bisexuals feel normal, accepted and loved. We have to be the voice at the end of what can be a trying tunnel of confusion, discrimination and pain. By being more vocal, we can be the support so many younger people are searching for as they come to terms with who they are and whom they have the capacity to love.