If you're in the market for a house that is ghost-free, the real estate blog D.C. Urban Turf has the place for you:

[A] four-bedroom home recently hit the market in the 500 block of Sheridan Street NW that has a humorous rider. Specifically, it signals that the home is “not haunted.” 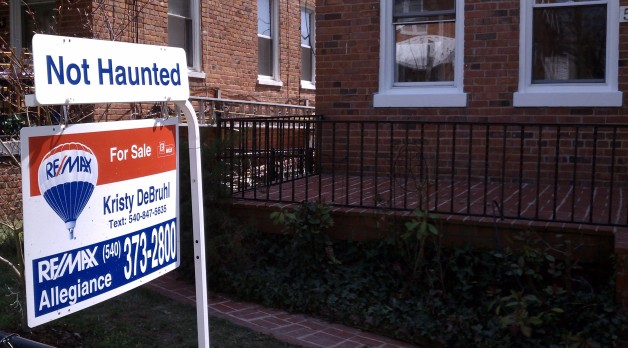 The Estately listing for the house contains no mention of its being inhabited, or not, by otherworldly residents -- the listing does mention the newly remodeled 1581-square-foot row house being located in a "very walkable" neighborhood:

And now, allow a moment of utter nerdiness: In law, there is a principle of statutory interpretation called "expressio unius est exclusio alterius" which means, translated from the Latin, "the express mention of one thing excludes all others."

Lawyers understand this phrase to mean that if some items are mention in a list, then other items that could have been mentioned, but haven't been, aren't included in that list.

An example is helpful, via a review of Supreme Court Justice Antonin Scalia's book Reading Law: The Interpretation of Legal Texts:

Reading Law is structured as a catalog of the canons of interpretation – 57 in all – complete with their Latin roots, in many cases. An example from chapter 10: expressio unius est exclusio alterius is the negative-implication canon, meaning that if a text explicitly covers one thing, it usually means that it does not cover other things. The authors gave a real-life illustration: “When a car dealer promises a low financing rate to ‘purchasers with good credit,’ it is entirely clear that the rate is not available to purchasers with spotty credit.”

Applying this principle to real estate, we can say that if some properties are listed as not being haunted, that could mean that those properties not listed as not haunted are haunted. In other words, if a seller doesn't explicitly say that their house isn't haunted, then it's possible to go ahead and assume the place comes with ghost roommates, who probably don't pay rent.

Buyer beware: Helder Gil, legislative and public affairs officer for D.C.'s Department of Consumer and Regulatory Affairs, tells HuffPost that, to the best of his knowledge, there are no D.C. laws or regulations that would require home sellers to disclose hauntings.

With this in mind, the Huffington Post ran searches through a number of real estate databases to see if other properties were, like this one, listed as not being home to ghosts. None were -- which, perhaps, suggests a number of spooky things about D.C.'s housing stock?

Kristy Debruhl, the real estate agent responsible for the "not haunted" sign, tells The Huffington Post that the listing wasn't actually intended to draw attention to the property's lack of spirits. It was just supposed to get some attention.