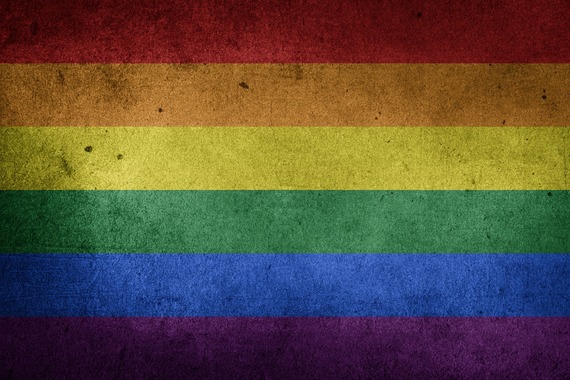 This week's post written by my ever-articulate cousin, Joshua Manning.

Certain spaces are transformative. Stepping foot in a holy city might feel like coming home, no matter where you were born. Or perhaps you get that feeling when you arrive on the campus of a women's college, or a historically black college, or when you enter a house of worship. Maybe you live in a tight-knit community and your neighborhood is that place. Maybe it's a certain festival where you can shed expectations, or a particular campground or vacation spot that, more than any other, frees you from the nagging burdens of life. When you're in these spaces, you are connected to something special. Because whether you're around people or appreciating it alone, you are in a place that other people deliberately put effort into making for people like you. If you're lucky, you have at least one of these spaces. If you're very lucky, you don't need any of them.

When I meet a stranger, I begin a dance that every gay person you've met has probably done - after we "come out" to the world, we still have to come out to each new person we meet because the assumption is always that we are straight until proven gay.

Living in the largest city in one of the most progressive states in the country, it would be easy to assume I don't need a safe space to be gay. Yet even on the streets of downtown Boston, I have been spat at and called a faggot. I have been punched in the face by a stranger for (as far as I could tell) the crime of wearing a shirt that looked too gay. And there's the lower-level stress. When I meet a stranger, I begin a dance that every gay person you've met has probably done - after we "come out" to the world, we still have to come out to each new person we meet because the assumption is always that we are straight until proven gay. It sounds trivial, but this dance has to be done just so. It can't seem like you're forcing the issue; it must seem natural. You have to bring it up early, even when it's irrelevant to the current conversation, because you never know when the conversation is going to turn towards your personal life and by then it might be too awkward. You hope that the stranger will react well, but you don't know what to expect. In most social exchanges, the only viable alternative to this dance is to carefully mind your pronouns, and that just feels like being back in the closet.

There's a weird phenomenon of human interaction where certain things are completely lopsided. While I'm actively doing this dance, you are just having a low-key conversation. Why would you be thinking about any of this? Similarly, being spat at or punched or called names - that has stuck with me for years. I'm guessing the people who did those things don't even remember.

The loss of 49 of our family is staggering, but the knowledge that our safe places are not so safe - that has a far wider reach.

This is what it feels like in Boston as a well-employed gay white male. The world is far more risky for LGBT people living in poverty, LGBT people of color, for trans people in general, for LGBT people in more conservative parts of the country, the list goes on. My worries are a baseline - it only gets harder from here.

Which is why, for many LGBT people - myself included - gay bars are on that very small list of transformative places. The moment you walk in, none of those worries are relevant. You are not going to be punched or harassed. You already came out to everyone just by walking in the door - no conversational juggling needed. You don't need to read into every interaction because the space exists to equalize all the reasons you would do that. That is true whether you like the bar or not - from the seediest dive to the clubbiest club. In there you can connect differently when, for a few hours, you're in a safe place where it feels like the world is made for you. Some of this connection lingers in the outside world - it's why you'll often hear LGBT people call each other "family" even when we don't know each other.

So perhaps you can imagine the shock and pain at hearing that one of those few safe places had been attacked. Whatever the killer's motivations, the effect was more than just taking away one gay bar; it feels like there was a target placed on all of them. For now, the outside world has entered those unique, transformative places and they have lost a bit of their power. The loss of 49 of our family is staggering, but the knowledge that our safe places are not so safe - that has a far wider reach.

This tragedy falls at the intersection of several political subjects - LGBT rights, gun laws, terrorism, privacy vs. security, and mental health diagnosis and treatment, to name some big ones. Please understand that talking about these issues is not making the tragedy political.

And there's the fact that LGB rights have come so far, so fast, and in the wake of that success we have been steadily shifting the focus to the tougher battles of trans rights. It felt like we were maybe poised to leave hatred and violence behind. But at the moment, that road feels a lot longer.

As the politics of the situation are hashed out in the news, we've read numerous possible motivations behind this attack. Republicans in particular are convinced that radical Islam is to blame. But Christians, Jews, and Muslims alike in our country have long used religion as a justification for bigotry and brutality towards the LGBT community - to reject us, to kick us out of our homes, to beat us up, degrade us, and sometimes kill us, and then to turn back around and invalidate those struggles. The Orlando massacre is shocking, but the slower trickle of hate-motivated LGBT homicides by people of all faiths each year, in aggregate, far exceeds the number of LGBT people killed in this incident. Treating this solely as an issue of Islam is not only taking a narrow field of view, it's cherry-picking data and misdiagnosing the problems that actually hurt us, and it distracts from a productive discussion about making our community safer.

This tragedy falls at the intersection of several political subjects - LGBT rights, gun laws, terrorism, privacy vs. security, and mental health diagnosis and treatment, to name some big ones. Please understand that talking about these issues is not making the tragedy political. It was already political on all of these fronts the moment a self-radicalized terrorist, who the FBI was already suspicious of, decided to use readily-obtainable guns to shoot up an LGBT club after declaring allegiance to at least one terrorist organization. Untangling the facts from the politics that brought us here is impossible, and trying to do so is a disservice to what happened. And treating it as an attack on all Americans - while true, and in some ways the solidarity from that approach is appreciated - also bypasses the disproportionate impact on the LGBT community that has been targeted by Americans for so long.

Reach out to your friends in the LGBT community, to ask questions. They might not see things like I do. If you're uncomfortable, tell them you might make mistakes, but you're trying to better understand what they go through every day.

Problems that we still have today are still here because we haven't yet found ways to solve them. Which means they're likely complex. Even in isolation, there are more than two sides to each of the political debates I mentioned. There are valid counterarguments to even the most "common sense" positions on each of them. When looking at how the political positions interact, the picture is vastly more complicated.

That doesn't have to paralyze us. Good policy is not perfect - instead, it balances benefits and drawbacks effectively. First and foremost, building good policy takes empathy. Empathy with the people the policy is meant to protect. Empathy with the people it could harm through no fault of their own. Empathy with policy-makers who are trying to balance those competing needs effectively but who cannot be experts in everything. Empathy with well-meaning people who have not yet joined the conversation, and a willingness to engage in a dialogue with them even if they don't know quite how to have that conversation in a sensitive and well-informed way.

In that spirit, I am sharing my experiences, to contrast them with yours and to help you find parallels between our lives. Now it's your turn to reach out to your friends in the LGBT community, to ask questions. They might not see things like I do. If you're uncomfortable, tell them you might make mistakes, but that you're trying to better understand what they go through every day. Trust them to give you the benefit of the doubt. Be open to learning, to coming up with creative ideas about these issues that are so difficult to tackle. In truth, I don't have a lot of optimism that this tragedy will lead to good policy on a national level, but if we reach out to each other and commit to honest conversations, we're on the right path.

Joshua Manning is a data analyst and a policy nerd. He lives in Boston with his husband.