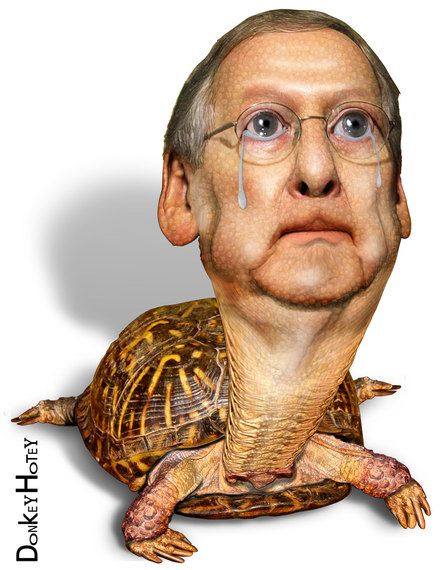 Nothing Mitch McConnell or any leading Republican says should surprise anyone at this point. But this most recent remark reveals just how far removed his priorities are from those of most Americans. Furthermore, it reveals just how extreme is the Republican ideology on the role of government in our society.

Our friend Mitch was responding to the maiden Senate speech of his GOP colleague from South Dakota, Mike Rounds. In the speech and in a statement on his website, Rounds addressed the matter of regulations. He condemned the "unelected, unaccountable bureaucrats" who write them and added that "one of the greatest hindrances to job growth and economic productivity ... is the overregulation of our citizens." Finally, Rounds lamented what he called, without a hint of irony, "regulation without representation."

Rounds was referencing the American Revolutionaries' condemnation of their being taxed by a government in which they had no say, or, as they put it, "taxation without representation." This served as a powerful rallying cry in the fight to throw off British rule. Rounds apparently fancies himself another Patrick Henry. Of course, regulations are the manner through which the executive branch enforces laws passed by Congress and signed by the president, all of whom we the people elect to represent us.

If a particular rule and/or regulation strays outside the bounds of the law as written, the courts can and do rein it in. In short, regulators are accountable, and elected officials are the ones who direct them in their work. Sen. Rounds is simply playing to the tea party base of the GOP, people who always seem to think that it's 1776 and that every action taken by the government with which they disagree is grounds to break out their tricorn hats, like this gentleman:

As for Sen. McConnell, he liked what he heard from Sen. Rounds and praised him for speaking out about "the single biggest problem confronting our country, creating the slow growth rate that we've had throughout the Obama presidency." For good measure (once wasn't enough?) McConnell also noted that overregulation represented "the single biggest domestic problem we have regarding the future growth of our country." It has hurt us in the past, it hurts us in the present, and it will hurt us in the future, apparently.

The reality is that we need tougher, more effective regulation in any number of areas, from those governing toxic chemicals in consumer products to rules on how many hours truck drivers can work without rest, and on and on. One of the most important arenas for regulation is the financial industry. Remember them? You know, the ones who crashed our economy back in 2008. They were able to do so because of a series of disastrous steps taken to deregulate Wall Street in the years leading up to 2008, including the repeal of Glass-Steagall and the decision not to regulate so-called "over-the-counter" derivatives (why, oh, why didn't anyone listen to Brooksley Born), as well as a general failure on the part of regulators who, according to the report commissioned by Congress to analyze the causes of the crash, simply "lacked the political will" to do their jobs.

President Obama and a Democratic Congress passed financial industry reform, aka Dodd-Frank, back in 2010. It may not be perfect, but Paul Krugman -- someone never afraid to criticize Obama from the left (in 2009 the cover story at Newsweek called him "Obama's toughest liberal critic") -- offered last year that the law is "working a lot better than anyone listening to the news media would imagine" and added that, "for all its limitations, financial reform is a success story." Krugman highlighted in particular the creation of the Consumer Financial Protection Bureau (CFPB) -- giving credit to Sen. Elizabeth Warren for its development -- as an important new force for regulating (there's that word again) the financial industry and protecting consumers from being ripped off.

Republicans like McConnell and Rick Perry -- who says his first day as president will see him kill Dodd-Frank and the CFPB (he can't remember what he'll do on his third day) -- love to talk about bureaucrats gumming up the works. But what they really want is to get government out of the business of protecting consumers and workers from unscrupulous corporations, too many of whom will take every chance they get to maximize profits without concern for the dangers those risks pose to the rest of us. It's also important to note that the unscrupulous ones force their honest competitors to choose between cutting the same corners to keep up or losing market share and perhaps going out of business altogether. Robust regulation protects them as well.

We need regulations so that we don't have even more tragedies like the one involving 29 miners killed as a result of what an executive at West Virginia's Massey Energy admitted was "a corporate conspiracy to evade surprise mine safety inspections," or like the one where at least half a dozen people died from faulty airbags when the manufacturer -- after its tests found problems so serious that engineers assumed a recall would take place shortly -- covered up the results and threw the evidence in the garbage. But overregulation is the problem?

The real problem is that money dominates our political system. One of the Senate's top Democrats, Dick Durbin of Illinois, acknowledged that, when it comes to Congress, the financial industry and the big banks "own the place." The Democratic Party is engaged in a crucially important debate over just how close to Wall Street and big corporations it will stand. Elizabeth Warren and, yes, Bernie Sanders are playing lead roles in pushing the party to the place many of us believe it needs to be.

When it comes to Republicans, there is no such debate. One of the first acts that the new, Republican-controlled Congress took earlier this year was to use must-pass legislation to weaken Dodd-Frank. The GOP wanted to give the financial industry more "freedom," which means more room to take the kinds of risks that might crash the economy again, necessitating another huge bailout for them while regular people lose their jobs. Rinse and repeat. When it comes to rolling back regulation, they don't just talk the talk; Mitch McConnell and company walk the walk. (And it's not easy walking when you're carrying a turtle shell. Hey, I did wait until the second-to-last paragraph!)

I'm sure the millions of unemployed Americans are thinking that overregulation is what's really hurting the country. The same goes for the tens of millions of Americans in the broad middle who may be working but who have seen their incomes fail to keep up with inflation while the top sliver captures pretty much all the increase in real income. What ever would we do without Mitch McConnell to help us keep our priorities in order?