It might sound strange, but growing up in Israel makes one's Judaism pretty obvious. You don't need to practice Judaism to know that you are Jewish. You know that you are Jewish because you are not something else. The last three years have made me confront my Judaism like never before. Just to put things in context, I grew up in a secular family in Tel Aviv, I do not eat Kosher, do not keep the Sabbath, and the last time I was in synagogue was only because someone down the street asked me to complete the "Minyan," the requirement of ten males for a prayer to begin. Three years ago, while volunteering in Haiti, I started dating an American girl named Sarah. As an Abraham, I saw this relationship as an obvious continuation of my heritage, fulfilling the promise of my name, except for the fact that Sarah is Lutheran. I was never "worried" that by dating a Christian I would convert, but the opposite happened, it made me confront my Judaism. All of a sudden I had to explain holidays and answer questions Sarah asked me about my beliefs, including rationalizing why I don't follow some of the Jewish traditions. Religion was a big part of our relationship from day one.

When I moved to the States to be with Sarah, I also started building a new community for myself. Of course, as you might expect, I searched for my own. I went to the Hillel in my school, took a fellowship with a Jewish organization in New York, and celebrated Jewish holidays with my aunt who lives in Manhattan. My first year in New York was probably the period of my life that I was the most active with my Judaism, although more as a community and less as a religion. I heard for the first time the term "peoplehood." Judaism is not only a religion or an ethnicity, it's a peoplehood. I like that term. I might not be religiously Jewish, but I felt like part of the family, a part of the peoplehood.

Everything changed for me when Sarah and I started to plan our wedding.

Sarah and I wanted to have a wedding that would reflect both of our traditions and religions. We planned for the wedding to be in Philadelphia and I thought that finding a rabbi to join a pastor in officiating would be an extremely easy task. There is a large Jewish community in the tri-state area, and armed with the term 'peoplehood' I assumed that different rabbis would respect my religious choices. That in America the peoplehood mattered, staying a part of the family. I was wrong. The quest to find the rabbi was the hardest part of planning the wedding. 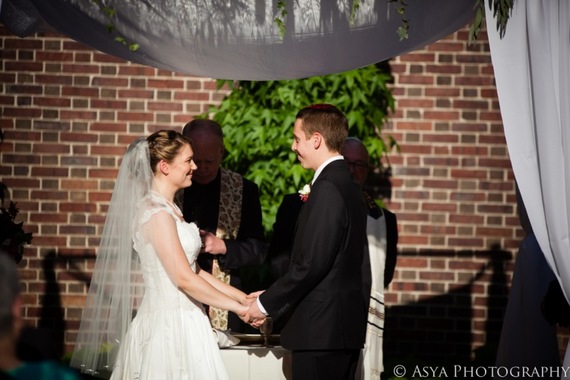 The irony was that every rabbi I spoke with (and there were a lot of them) started the conversation sounding genuinely happy for us and then started the list of demands. One would marry me to a Christian, but only if a pastor was not present. Another wouldn't stand under the chuppa. One rabbi told me that Jesus could be mentioned, but only as a historical figure and not as a divinity. He went so far as to give me a list of words that could not be said in proximity to the name Jesus, and when the list hit the world "lamb," I told him that I would have to verify our dinner menu with the caterer just in case. One rabbi seemed to be content to co-officiate; we even set a date for a meeting to start working on the ceremony itself, but then in one of our phone calls she told me that she wanted to be honest and to remind me that according to Jewish law I wouldn't be "married for real." She was willing to do the show for us, to pretend, and she thought we would be grateful. And that was the message that the Jewish community gave us. We don't believe your marriage is legitimate, even if you find someone who will pretend it is. At this point, a few months into the search, how many couples out of the 58 percent that marry a non-Jewish partner choose to not have a rabbi in their ceremony at all?

Eventually we found a rabbi, and we were lucky. Our ceremony was beautiful, but it wasn't an interfaith ceremony. The term interfaith marriage always reminds me of the term international water, neither here nor there. As if it is some spiritual limbo where no one is in charge. I am not in an interfaith marriage; I am in a two-faith marriage. A few weeks before the wedding, the pastor, who is a close friend of Sarah's family, asked to show me the ceremony and said he could "de-Jesus" it a bit if I felt it was necessary. I was in awe. There is an Israeli pop song that was very popular a few years back that goes, "the one that believes isn't afraid to lose his faith." This was true about our pastor. I admired his level of belief, and I remembered the rabbi who told me that the word "lamb" couldn't be in the ceremony. In contrast, the Pastor didn't think that by not mentioning Jesus it took away from the union between Sarah, God, and myself, or from his own Christianity. Our ceremony was a two-faith ceremony. We are married in the Christian tradition, and we are married by the Jewish tradition. Not somewhere in the middle.

I'm not sure what the next step is for me and the American Jewish community. If I find a synagogue where my Christian wife and I can go and sit together with respect for both religions, who knows, maybe I will start going. But from my experience over the past year, despite the Jewish community's use of the term "peoplehood," it still has a long way to go to understand that there are many kinds of Jews in that peoplehood, and some of them have a thing for shiksas.

Abraham Gutman is an Israeli economist and independent writer based in Philadelphia. His writing focuses on Israel/Palestine, racism in America, the criminal justice system, and housing.