Since their capture of Iraq's second city of Mosul on June 10, a great deal of attention has been paid to the self-labeled 'Islamic State' and its continuing advance across Iraq. On August 2, Islamic State fighters seized the largely Yazidi town of Sinjar and on August 3, they captured Zumar, Wana, and the Ain Zalah oil fields and refinery. By August 7, the Islamic State had reportedly taken the Christian town of Qaraqosh near Mosul, the Mosul Dam, and two villages -- Ghwar and Mahmour -- situated only 30km from the Iraqi Kurdish capital Irbil. By all accounts, these gains are extraordinary and deeply threatening not only to Iraqi long-term stability but also to the security prospects of the wider region.

Beginning in mid-July, the Islamic State re-initiated offensive operations against Syrian government targets, beginning with an attack on the Al-Shaer gas field in Homs governorate, which was captured on 17 July, resulting in the death of at least 270 people -- soldiers, security guards, and civilian staff. As well as being a major source of natural gas, the facility was a large military base and the Islamic State is thought to have captured 15 tanks and a vast arsenal of additional light and heavy weaponry from the facility before withdrawing on 26 July.

On July 24, this focus on attacking strategically valuable government targets expanded significantly to include operations in Raqqa, Hasakah, and Aleppo governorates. On July 25, the Islamic State captured the SAA's 17th Division base in Raqqa and on July 26, the group took control of the SAA's 121st Regiment base in Hasakah. All the while, heavy bombardment and periodic pincer attacks were being launched on the Kweiris Airbase (Syria's pre-war primary air training facility) in Aleppo; SAA and Kurdish targets around Hasakah city; Kurdish positions around Ayn al-Arab (or Kobanê); and SAA positions in Deir ez Zour city. Just last night, the Islamic State added to its list of conquests by capturing the SAA's 93rd Brigade in Raqqa.

These strategic gains are significant not just for their role in weakening the SAA in areas surrounding Islamic State-controlled territory, but more importantly, for directly strengthening the group's capacity to continue expanding their military capabilities. A cursory examination of imagery from the capture of the 121st Regiment, for example, shows that the Islamic State captured at least 12 130mm M-46 towed field guns with dozens of crates of ammunition. These long-range artillery systems can strike targets 27km away. In addition, the base also contained at least seven BM-21 truck-mounted multiple rocket launchers (MRLs) and according to my calculations, at least 400-500 accompanying 122mm Grad rockets. Depending on the model of Grad rocket, these can strike targets at least 15-20km away. But stand-off bombardment was not the only capability provided by the capture of the 121st Regiment. Several operational T-55 tanks were seized, along with hundreds of rocket-propelled grenades (RPGs), tens of thousands of rounds of small-arms ammunition, dozens of military vehicles, assault rifles, hand grenades and several anti-tank guided missiles (ATGMs). 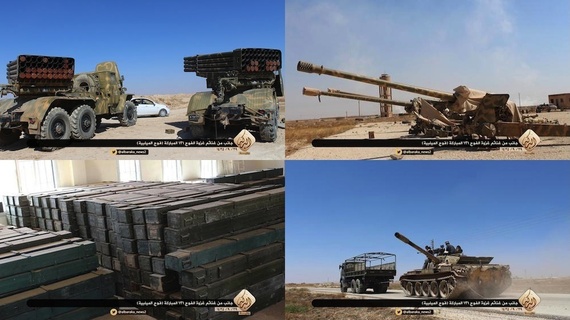 Significant quantities of weaponry were also seized in the 17th Division and the 93rd Brigade bases, with the latter likely housing several dozen military vehicles, including tanks. Intriguingly, the final assault on the 93rd Brigade on 6 August (the attack having begun in force on July 31) made use of BM-21 MRLs, pointing potentially to the supplementary impact of weapons seizures (from the 121st Regiment) upon the capacity to carry out successful subsequent operations.

This raises the inevitable question of why the Islamic State chose to re-launch operations against the Syrian government when it did (in fact, perhaps a more accurate question would be why the SAA chose to begin targeting Islamic State positions with air strikes in June). Since it effectively ceased offensive operations against the SAA in mid-2013 (and the SAA, vice-versa), the theory that the Islamic State and the Assad regime were working hand-in-hand gained traction within some circles. Considering the extensive history of Syrian intelligence's facilitation and manipulation of Sunni jihadists -- including the Islamic State's predecessor organization, Al-Qaeda in Iraq -- it appeared, so the theory went, quite likely that Assad was using these same connections to help bolster a largely foreign actor who would divide and weaken the Syrian opposition.

The Islamic State's expansion across northern Syria in 2013 did indeed divide and weaken the opposition. Moreover, it is also almost certainly the case that the Assad regime strategically chose not to confront an actor whose actions were clearly benefiting the cause of its own survival. However, the likelihood that the Salafist-jihadist Abu Bakr al-Baghdadi and his tight-knit circle of deputies and military chiefs were coordinating their actions with the Arab Socialist Baath Party led by an Alawite is a theory too far.

The Syrian government's decision not to target the Islamic State and to instead focus on combating the largely indigenous opposition and on securing the western Damascus-Homs stretch of territory leading to Tartus and Latakia was one likely explained by a need to focus on immediate priorities. Likewise, the Islamic State placed its focus on the immediate priorities of establishing a territorial base and combating the increasingly hostile opposition and the very capable Kurdish Yekîneyên Parastina Gel (YPG).

Assad's major misstep (or weakness) was not to have calculated that the Islamic State might not eventually come back with the capability to add to its immediate targets. This is what appears to have happened. Riding a wave of momentum from its victories in Iraq, bolstered by large amounts of weaponry transferred from Iraq into Syria, and having taken near-total control of rural Deir ez Zour. the Islamic State found itself in a position in mid-July where it was now capable of attempting to expand its territorial control in Syria. Having withdrawn from nearly half its territory in Syria between January-March 2014, the Islamic State was now sufficiently consolidated and militarily capable to try again, albeit with more manpower, more money, and more weapons.

Taken together, the Islamic State's ongoing offensive and military gains in Iraq and Syria are extremely significant. While it has also now gained a public role within Lebanon through recent events in Arsal, it is unlikely that Lebanon will prove an immediate focus for the group.

In Syria, it is most likely that the Islamic State will seek to maintain the offensive momentum that is has created by continuing to target remaining centers of government, SAA, and YPG control in Hasakah, Raqqa and eastern Aleppo, thereby expanding the scope of its existing wilaya (states) of Al-Baraka (Hasakah), Al-Raqqa, and Halab (Aleppo). The fourth phase in the Islamic State's military strategy -- tamkin (or consolidation) -- will prove a crucial determinant of how sustainable its expanded control will be in the months ahead.

A continuing rebellion by the Sha'itat tribe in Deir ez Zour (renamed Wilayat Al-Khayr by the Islamic State) will draw resources in the coming days and possibly weeks, as the Islamic State seeks to consolidate its position in the east along the Euphrates and Khabur rivers. While the Sha'itat uprising is symbolically very important in serving to underline the simmering discontent within sectors of Syrian society unwilling to be ruled by the Islamic State, it is unlikely that a comparatively poorly-armed tribal force will be able to hold out against a now active Islamic State counter-attack.

The Islamic State looks to be an almost unbeatable force in northeastern Syria (and Iraq) right now, and in the immediate term, that might well be an accurate assessment. Neither the Syrian or Iraqi governments, the Kurds, other armed groups, or Western governments appear to have the capability or urgency or backbone to implement the decisions and actions necessary to begin a long-term process of fighting back.

Should it succeed in consolidating its gains in Syria's northeast, the Islamic State's next target will likely be directed westwards, starting at Kweiris Airbase and Kurdish territory around Ayn al-Arab, but crucially back towards the rest of Aleppo, Idlib, and possibly even Latakia. Should such an eventuality begin to take place, the Islamic State will face stronger opponents -- including Islamic Front groups, newly bolstered moderate coalitions like the Syrian Revolutionaries Front (SRF) and Harakat Hazm, and the YPG. That will prove a defining test for all concerned, with significant consequences for the future of the conflict and the Islamic State.

_____________ Charles Lister is a Visiting Fellow at the Brookings Doha Center in Qatar. Follow him on Twitter at Charles_Lister