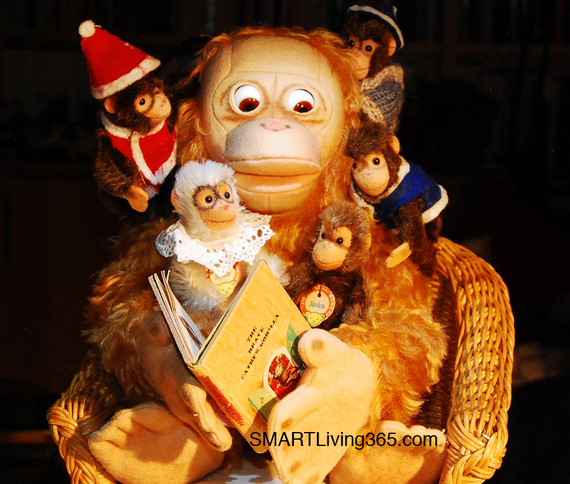 I have a habit of being almost fanatical about my commitments. If I say I'm going to do something, come hell or high water, I'll do it. For the most part this quality has served me very well. However, sometimes this obsession gets me in trouble. That usually happens when the edges of my commitment get fuzzy with the actions or non-actions of others. Before I know it, I'm sucked into involvement and drama that is not of my doing, and usually not even in my control. That's why the Polish proverb, "Not my monkey, not my circus," has become a valuable mantra for my life.

I first saw this phrase on Facebook and since have seen the quote as, "Not my circus. Not my monkeys." But I prefer to put the monkey first because I usually get involved with the people first and then drawn into their circus. From now on I want to steer clear of both.

Need an example? A few years ago I agreed to volunteer for a local organization. Volunteering meant a significant commitment of my time and energy, but because I agreed to do it I jumped in feet first. Thankfully, the return on my "gift" has rewarded me in many ways. Then a year ago I saw a need in the organization and volunteered to fill that beyond my previous commitment. Unfortunately I underestimated the increased commitment making the new position more challenging. To top it off, a woman in the leadership of the group has ended up making my work even more difficult than anticipated.

A couple of weeks ago this woman I'll call Jane phoned me in a panic telling me that she had screwed up and not checked some vital facts that affected dozens of people. She asked if I could help. In some ways, the wise answer would have been to pause and think it over before agreeing to help because this wasn't the first time this had happened. But Jane didn't stop there. Jane told me her father had just passed away and that she was critically needed to go to the aid of her sick mother. With that as an excuse, how could I not help?

The thing is, yesterday Jane called in a panic once again. Even though I had previously spent a couple of hours unraveling her mistake, she had not communicated the information to the right person and had essentially made the problem even worse. Could I help? Thankfully I was conscious and awake enough to tell myself what I needed to hear. "She is not my monkey. That is NOT my circus."

Now I'm not saying that I am conscious enough to never again be sucked into someone else's drama -- but I hope I am getting there. Of course, the closer to home the "drama" is, the more likely we are to think it is ours in the first place. Plus, if the drama is happening to a family member or a close friend, most of us (especially women) feel that it is only right or compassionate to help whenever called upon. But when we are more compassionate to others, and neglect and abuse ourselves, is that what compassion is asking for? And at what point is that "help" more about our need for love, acceptance and approval, than it is to really offer that person what they need above all else? This of course ties into one of my previous posts about needing to be right. Does our desire to rescue others really hide a need to prove our "rightness"? To prove our "worth"?

Letting go of other people's monkeys and circus is something many of us have wrestled with throughout our lives. I've always loved a Buddha story with the same theme. According to the story, one day the Buddha was walking down the street and a man approached him and started hurtling insults and accusations at him. The Buddha calmly listened to the irate man until he stomped his feet, waved his arms in the air and marched off down the street.

A bystander who saw the incident walked over to the Buddha and asked him, "How were you able to not respond to that man?" The Buddha merely paused and asked this new man, "If someone offers you a gift and you refuse to accept it, who does it belong to?" In other words, what the first man offered was not his monkey, not his circus.

This message is repeated over and over by others as well. Author Richard Carlson, Ph.D. said something just like it in his book, Don't Sweat the Small Stuff... and it's all small stuff. Carlson reminds us that, "If someone throws you the ball, you don't have to catch it." Author Byron Katie in her book Loving What Is says, "To think that I know what's best for anyone else is to be out of my business. Even in the name of love, it is pure arrogance, and the result is tension, anxiety, and fear. Do I know what's right for me? That is my only business. Let me work with that before I try to solve problems for you."

Is there ever any time I should get involved in the monkeys or circus of someone else? Maybe. That's something only we can individually decide. But I'll bet most of the time we do it unconsciously and out of habit without really thinking about whether it is something better left to the other person who "owns" it. And any time we are doing it with the underlying hope for approval, acceptance or love, chances are good that we are using it as a distraction (and excuse) from living our own life as fully and completely as possible. Maybe, just maybe, the SMART path would be for each of us to focus, learn from, and ultimately enjoy our own monkeys, and let everyone else do the same.

Kathy Gottberg believes in living healthy, authentic, fearless and SMART. This post originally appeared on her blog with a number of related comments. For other similar topics go to SMART Living 365.


More:
healthy livinglifestylebeing true to yourselfWomencompassion
Newsletter Sign Up
An essential daily guide to achieving the good life
Subscribe to our lifestyle email.
Successfully Subscribed!
Realness delivered to your inbox