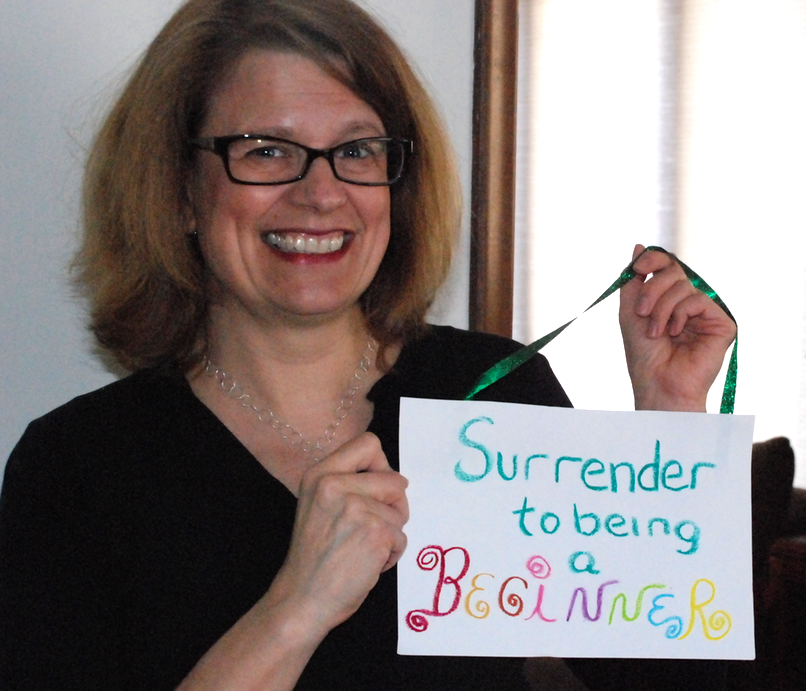 My wife, Dorsey, with her affirmation.

Pushed your comfort zone by taking on a scary challenge lately? Go for it.

Tackling monster challenges -- where failure is the expected outcome because you lack the credentials to succeed -- can be addicting; the high when you pull it off is out of this world! Like a lot of people, I've taken on my share of these, including moving to New York City with a high school diploma and winding up as Newsweek's Graphics Director, and later approaching academia with the same lack of credentials and getting hired to teach.

Talk about an ego boost! Give me more of that!

Have I swung for the fences and missed? Yup. Publicly? Oh yeah. But my self-esteem survived because -- and here's a great secret about tackling a long-shot idea -- taking risks where you aren't expected to succeed comes with a built-in fail-safe: fail, and you can say "after all, I had no training in this area, but bravo for trying!" and success feels stratospheric because it was accomplished "against all odds." It's a win-win situation, like being the underdog in a fight: you're expected to lose, but win and you're a hero.

This doesn't mean that taking the first steps toward a challenge like this is easy. I was often terrified and in need of a push, an infusion of confidence, to get me moving. After all, doing battle is a choice, and this is a choice you don't have to make, and many don't for fear of failure.

Recently, some good advice turned me around when, frozen with terror, I had considered walking the other away. I found myself having to lead 20 people on my first-ever guided meditation during a visualization-on-paper class at the Omega Institute in New York. For a dork like me, who self-identifies closer to Hunter Thompson (in my dreams) than to the Dalai Lama, I felt certain this was not going to go well. Unable to sleep, I told my wife, Dorsey, that I was about to make a fool of myself and she did two very important things:

One: she didn't laugh
Two: she wisely said the most important thing was to commit to the role and not let the students think for a second that I didn't know what I was doing. If I went all awkward and apologetic in the middle of the meditation, she added, it would expose me as the fraud -- I mean newbie -- that I was and leave the students hanging and frustrated.

So, I had to become an actor in my own play.

I thought about the comedian Jim Carrey, who throws himself into his roles like a madman, and they're funny because he's entirely convincing as whatever character he's portraying. He makes it look easy, but it couldn't always have been easy for him, and maybe still wasn't. We, as his audience, expect and want him to succeed because we want a good time. My meditation students would expect and want me to succeed, too. So who was I to deny them?

Surrender to being a beginner

Dorsey once said to me, "It's the human condition to act like we know what we're doing all the time. No one ever wants to look like an idiot." To counter-attack this she has an inspiring affirmation hanging in the kitchen that says, "Surrender to being a beginner!" (not her line), and it's a good thing to be reminded of. If we hope to stay current and relevant in our work, we have to continually begin again (and again and again) and reinvent ourselves, growing and learning to compete in today's ever-changing world. If you can regularly do this, it's a strength that makes others, from bosses to spouses, feel safe with you, like you're someone who can, and will, take care of things. This is good.

So, I went through with the meditation. As the students lay expectantly about the floor awaiting my instructions, I asked them to close their eyes and then dove into my role with a Jim Carrey-like commitment (only calmer!) backed by a healthy dose of Dorsey Wisdom. I was acting at first, but midway through I felt just like the real thing, like the freakin' Dalai Lama himself was speaking. One of the students came up to me afterward and said, "Karl, I honestly didn't think you could pull it off, but you did!"

I still get the "Dude-are-you-INSANE?" thoughts butterflying around in my stomach when faced with new, scary challenges, but the years have taught me that, if I bring some skills (my weapons) to the battle along with a willingness to fight, I will most likely succeed. And if I don't succeed, I'll not only survive, I'll be stronger for it and it will be easier next time.

And there is always a next time, if you keep surrendering to being a beginner.