Many conservatives wish they could turn the clock back to a happier time, a more wholesome era like the 1950s.

Some spectacles, like Cecil B. DeMille's 1956 treatment of The Ten Commandments gained great notoriety for their special effects. Others achieved unintentionally great moments of camp.

In 1955, Land of the Pharaohs (featuring Joan Collins as an evil Egyptian Princess) ended with a phenomenal Rube Goldberg-like sequence that sealed the Pharaoh's tomb.

When George Forrest and Robert Wright adapted the music from Alexander Borodin's 1890 opera, Prince Igor, they used the famous Polovtsian Dances for much of the musical's score. In the following clip, Dolores Gray performs Lalume's big production number in the 1955 film adaptation of Kismet.

The closing night attraction of the 2015 San Francisco Silent Film Festival was a screening of 1925's Ben-Hur: A Tale of the Christ starring Ramon Navarro as Judah Ben-Hur. Based on Lew Wallace's 1880 novel, Ben-Hur: A Tale of the Christ, the contract drawn up with Wallace's heir for the novel's screen rights stipulated that audiences could not view the face of the King of the Jews anywhere in the film.

Thus, a very white hand could be seen reaching out to offer a thirsty Judah Ben-Hur a sip of water. Late in the film, as Christ is dragging his cross through the crowd, parts of his robe were all that could be seen of him.

Produced by Louis B. Mayer and directed by Fred Niblo (following Charles Brabin's failed attempt to shoot the film in Italy), 1925's Ben-Hur is noted for its thrilling chariot race in which its two male leads, Ramon Navarro and Francis X. Bushman, drove their own chariots. 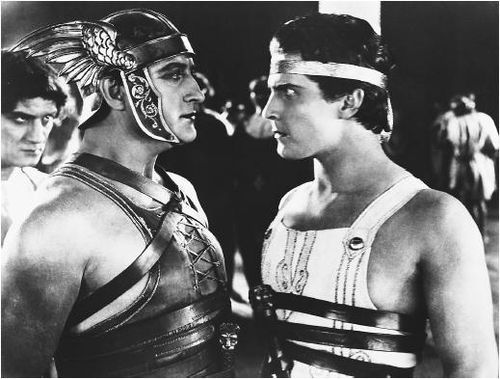 Messala (Francis X. Bushman) and Judah Ben-Hur (Ramon Navarro)
face off in a scene from 1925's Ben-Hur: A Tale of the Christ

Most of Ben-Hur was filmed in Culver City, with the chariot race filmed on a gigantic Circus Maximus set (built near the intersection of Venice Boulevard and La Cienega) whose construction required 800 men working continuously for four solid months. It took decades for 1925's Ben-Hur (the most expensive film of the silent era) to recoup its initial investment of nearly $4 million. 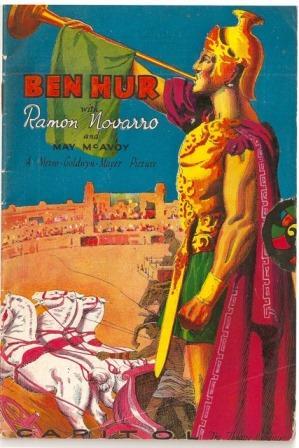 Using the restored film's prerecorded score by composer Carl Davis (which heavily relies on a Wagnerian leitmotif from 1882's Parsifal), Ben-Hur was introduced by noted film historian Kevin Brownlow (who worked on its restoration in 1987). Here's Brownlow accepting his Academy Honorary Award in 2010 (the first time such an award was ever given in recognition of an artist's work in film preservation).

1925's Ben-Hur was filmed long before the invention of computer-generated imagery (CGI). With Brownlow narrating, the following clip includes comments from some of the film's assistant directors and cameramen, who describe the visual tricks used to create and film the great chariot race.

As thrilling as the film's sets (and its experimental color film sequences) may have been, Ben-Hur was also a triumph of costume design. Check out these shots of Carmel Myers in a stunning outfit designed for the character of Iras (Messala's mistress). 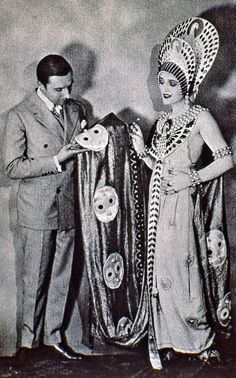 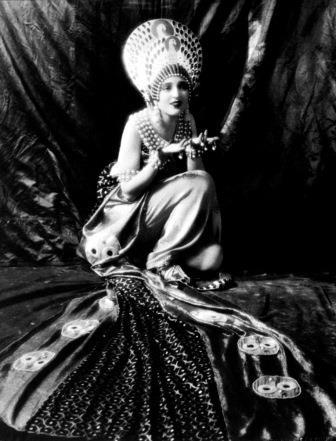 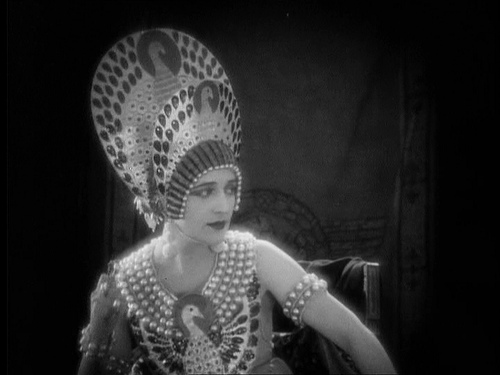 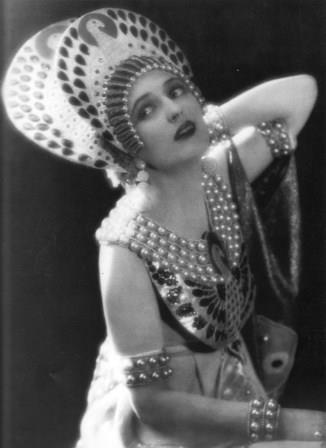 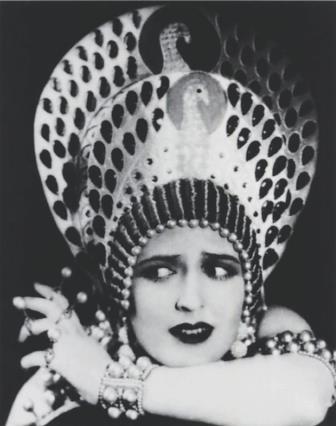 As someone with a passion for maritime history, I was thrilled by the use of a custom-made fleet of triremes (Roman galleys with three banks of slaves manning the oars) for the naval battle sequence. 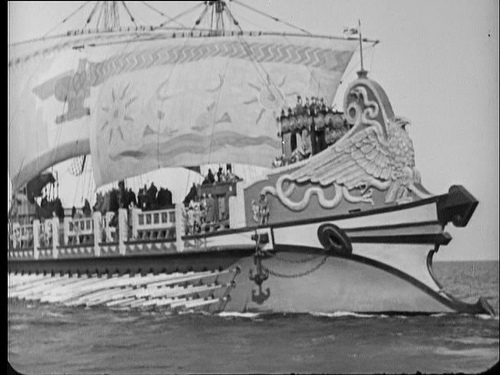 Even more exciting, however, was the shackled piece of muscle pudding below decks whose naked body must have been a source of inspiration for the galley slaves to row harder. Much harder. 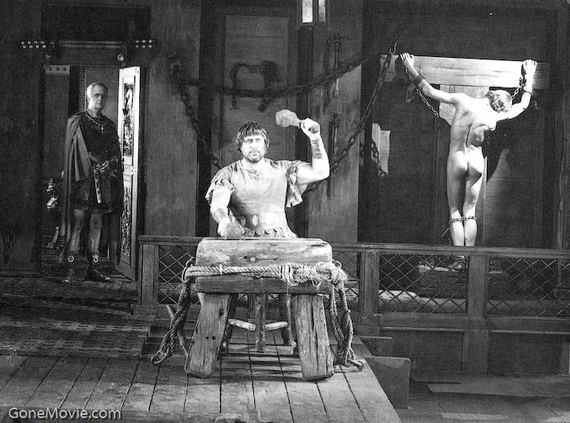 In addition to Christ and the chariot race, Ben-Hur also included a furious sea battle and a valley filled with lepers. The film begins with a radiant vision of Betty Bronson as the Virgin Mary. Among Judah's family are Claire McDowell as his mother, Kathleen Key as Tirzah (his sister), May McAvoy as Esther (his wife), Dale Fuller as Amrah (his maid), and Nigel De Brulier as Simonides (his slave). 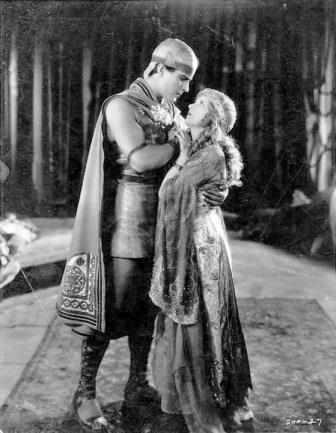 Ramon Navarro (Judah) and May McAvoy (Esther)
in a scene from Ben-Hur: A Tale of the Christ 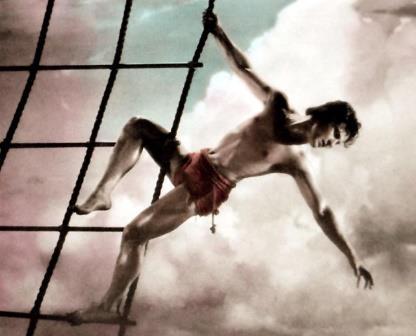 Ramon Navarro in a scene from Ben-Hur: A Tale of the Christ

Less than a week after the screening of Ben-Hur, the San Francisco Opera opened its 2015 summer season with a smashing production of The Trojans, a rarely-performed opera by Hector Berlioz which, although composed between 1856 and 1858, did not receive its first "uncut" performance until a century after Berlioz had completed the work. 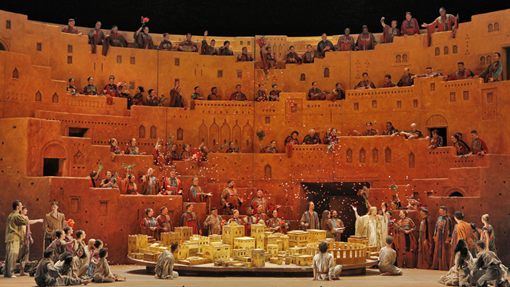 Act II's set for Carthage in The Trojans (Photo by: Cory Weaver)

There's a good reason why the costs and planning of David McVicar's impressive production necessitated a cooperative effort between the San Francisco Opera, The Royal Opera in London, Teatro alla Scala in Milan, and the Vienna Staatsoper. As Speight Jenkins (the former head of the Seattle Opera) explains:

"To this day The Trojans is only performed by opera houses with great resources and by a leader who believes that this great work is worth the time and funds to bring it to the public. San Francisco Opera presented a very abridged version of the opera in the 1960s. The Metropolitan Opera ventured a production in 1973, and whenever the opera is performed, it is a significant happening. The problem is not the length (though overtime figures into every opera manager's thinking), but the forces of dance, chorus, the number of principals, the sheer demands of the mythic story." 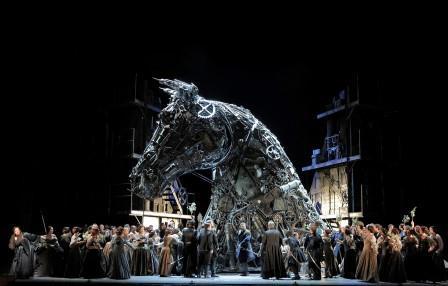 The Trojan Horse is brought within the walls of Troy
in The Trojans (Photo by: Cory Weaver)

"For instance, one cannot really present the opera properly without a Trojan Horse, one that is large enough to house a lot of Greeks, and there are multiple technical problems in Carthage, such as The Royal Hunt and Storm (one of the great musical joys of the piece but one that demands all the elaborate action of a French pantomime opera of the 18th century). Berlioz described his opera as a Virgilian opera on the Shakespearean plan. Because he loved Shakespeare as much as Virgil, the composer managed to include in this opera not only plenty of soliloquies (arias), massive choral scenes (the chorus is onstage and active for three-quarters of the opera, a figure almost surely not equaled in any opera in repertory today), great poetry, and even comic relief." 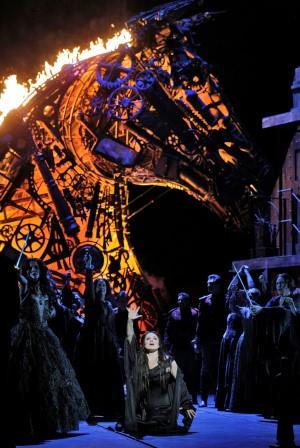 Shortly before the performance I attended began, it was announced that tenor Corey Bix would be substituting for an indisposed Bryan Hymel in the key role of Aeneas. That, plus the fact that this production of The Trojans is nearly five hours in length (and I was feeling a bit tired) slightly diminished my overall enjoyment of the performance. 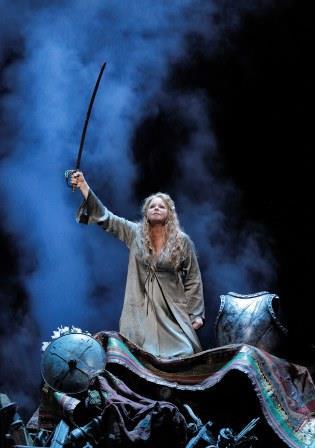 Dido (Susan Graham) prepares to die atop a pyre in a
climactic scene from The Trojans (Photo by: Cory Weaver)

However, there was no mistaking the fact that some grand singing was taking place. Leading the company were Anna Caterina Antonacci as the ill-fated Cassandra; Susan Graham as the Carthaginian queen (Dido), and Sasha Cooke as Dido's sister, Anna. Brian Mulligan scored strongly as Cassandra's husband (Coroebus) as did Christian van Horn in the role of Narbal. 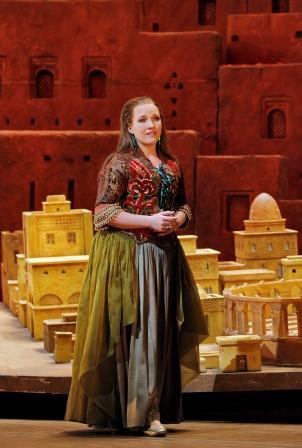 The company's former music director, Donald Runnicles, returned to the Bay area to conduct The Trojans with director Leah Hausman guiding the cast through Berlioz's trip around the Mediterranean from Troy (located in modern Turkey) to Carthage (located where Tunisia now stands) and onward to Italy with an occasional reference to Libya. I was fascinated by Es Devlin's mammoth sets, including her concept for the Trojan Horse and the magnificent vision of Hannibal that she conjured up for the final act.

If I have one criticism, it would be that I found the costume designs by Moritz Junge to be a bit jarring. For some reason, Junge had the Trojan men clad in mid-19th century costumes more appropriate to the time of the opera's premiere. However, considering the vast scope of this production, that's a minor complaint.

Overall, the evening was a monumental triumph, particularly for the velvet-voiced Susan Graham as Dido. Here's some footage from the San Francisco Opera's production of The Trojans .