Instead of the plodding turtle he's normally satirized as, Senate Majority Leader Mitch McConnell is all cat-on-a-hot-tin-roof about Trade Promotion Authority, better known as Fast Track.

He said as Congress convened this month that he wants to fast track Fast Track. He intends to ’git ’er done so fast no one notices that with it, Republicans will provide, as McConnell put it, “an enormous grant of power. . .to a Democratic President.”

Fast Track is nothing more than Congress pulling a fast one on the American people. It’s a plan for lawmakers to abdicate their Constitutional responsibility to regulate international trade. With Fast Track, Congress shirks its duty to subject trade deals to lengthy line-by-line scrutiny, fulsome public hearings and amendment.

While gratifying Wall Street and multinational corporations, past Fast-Tracked trade deals have battered American workers as factories fled off shore, wages stagnated and layoffs multiplied. Fast Track is an outmoded strategy for indolent politicians. Workers in the 21st Century deserve in-depth deliberation over trade proposals to ensure jobs, the environment, food safety and national sovereignty are protected. Mitch needs to back track on Fast Track. 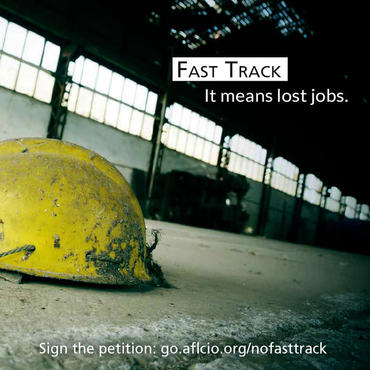 Mitch is in a big old hurry because he doesn’t want serious examination of several nearly completed trade deals, including the Trans-Pacific Partnership (TPP) with 11 Pacific Rim countries, and the Trans-Atlantic Trade and Investment Partnership (TTIP) with European Union countries.

He wants the slogan “free trade” to lull Americans into glazed-eyed zombie approval. Free is great, right? Everybody’s for freedom! What could go wrong?

A lot, actually. Think of that “giant sucking sound,” as presidential candidate Ross Perot put it, caused by Fast-Tracked free trade agreement NAFTA. The vortex occurred as the deal pulled factories and jobs south across the border to low-wage Mexico and drew displaced Mexican subsistence farmers north to undocumented status in America.

Think of all the promises of increased exports and jobs when Congress Fast Tracked the free trade agreement with Korea (KORUS) in 2011. These are broken pledges. Since pact’s approval, the U.S. trade deficit with Korea grew 50 percent as U.S. exports to Korea fell by 5 percent. The result: loss of 50,000 American jobs. And it’s not getting better. Last October, the monthly trade deficit with Korea was $3 billion, the highest the United States ever experienced with that county.

After analyzing 20 years’ worth of trade and economic data, Trade Watch determined that arguments used to justify Fast Track in the past proved false.  It says:

“Over two decades, a series of trade agreements not only failed to meet their business sector and political backers’ glowing promises of job creation, but instead resulted in unprecedented and unsustainable trade deficits, the net loss of nearly 5 million U.S. manufacturing jobs and more than 57,000 factories, 7 million higher-wage service sector jobs offshored, flat median wages despite significant productivity gains and the worst U.S. income inequality in the last century. And, even for U.S. agriculture, a sector that consistently has been promised gains from past trade pacts, U.S. food exports have stagnated while U.S. food imports have more than doubled in the past 20 years of NAFTA-style deals.”

Not so fast, Mitch. None of that sounds good. It sounds, in fact, like Congress should perform its Constitutionally required job and thoroughly investigate proposed trade deals, not rush them past the public to appease Wall Street and multinational corporations that want to ship even more factories overseas to low-wage countries with no labor or environmental protections.

Fast Track is the poison pill legacy of Republican Richard Nixon, along with use of the word “gate” to mean scandal.  The disgraced president devised it. By adopting it, Congress forbid itself from filibustering or amending proposed trade agreements. Congress limited itself to 90 days for review and 20 hours for debate, instead of taking as much time as necessary to seek comment, evaluate and repair proposals.

With Fast Track, Congress deliberately upset the nation’s system of checks and balances by eliminating an important check. Congress says it just doesn’t want to check trade deals.  It dodges its exclusive Constitutional responsibility to “regulate commerce with foreign nations.”

Congress has Fast Tracked away its Constitutional obligations several times since Nixon offered lawmakers the opportunity to go to recess rather than get down to work. Mitch’s determination to quickly do it again now is particularly frightening because trade deals no longer are primarily about trade.

For example, only five of the 29 secretly negotiated chapters in TPP deal with trade. Supersized trade agreements now intrude on every area of life, from food safety to generic drugs to national sovereignty. They can extend patents that make life-saving drugs unaffordable. They can forbid country-of-origin labeling on food. They can outlaw requirements that American taxpayer-financed road and bridge projects use materials made in America. They can allow multinational corporations to sue governments for damages if a law to protect the public reduces profits. They can commit the United States to pay fines or revise laws if an international tribunal orders it.

That’s stuff to slow down, not Fast Track.

Coalitions of Fast Track opponents of both political stripes have formed. A right-wing group that includes Americans for Limited Government, the American Family Association and Eagle Forum held a press conference last week to tell Congress to put the brakes on Fast Track.

The week before, a massive coalition that includes Democratic lawmakers, unions, environmental and consumer protection groups, community and faith organizations and human rights and trade alliances gathered to tell Congress the same thing.

The TPP would be the largest so-called free trade agreement that the United States ever bound itself to. Trade among the 12 nations accounts for 38 percent of global economic activity.  Deliberating a pact like that should be slow tracked. The plodding turtle is right for this one, Mitch.