A DVD Review in Five Movements Plus Coda

Whenever it was that Mad Mel's Passion of the Christ came out -- 2004, was it? (I didn't care, nor bother) -- the good folks at Rainbow Releasing, in conjunction with the bad boys of Monty Python, saw fit to offer counter-programming in the form of a zero-frills re-release of Monty Python's Life of Brian. I know this because a SoCal cinema proudly promoted it across its marquee, and I was so ecstatic to see that cinematic classic's title up there that I danced about in front of it for a good half hour, singing "Always Look on the Bright Side of Life" to passersby, and very nearly getting arrested. Then I went inside and made decidedly unsubtle love to the movie screen. Good times, good times.

Now, however, that cinema has been gutted and closed, its barren, dead marquee a halfway house for depressed pigeons, the holy light of Life of Brian -- all that Pythonic wit and verve! -- ostensibly extinguished, vanished from the region.

Last night I passed that selfsame former cinema (ouch!) -- still shuttered, still dead, still miserable -- but I carried on into a still-alive (and increasingly rare!) "record" store -- wherein I purchased my DVD copy of the brand-new Not the Messiah (He's a Very Naughty Boy) -- which is to Life of Brian what Spamalot is to Monty Python and the Holy Grail -- only potentially more offensive to religious and/or witless people.

The DVD case for Not the Messiah sits here before me as I type, and, glancing at those beloved Pythons on the smartly-designed cover, I feel as though I've got the greatest uncles in the whole world, reminding me (yet again) that the world needn't be the horrid, backward, tedious, childishly superstitious place it often seems to be. Lo, Pythonic brethren and sistren (sic), our sacred fools are back, bearing sumptuous gifts for the discerning comedic and musical connoisseur. Should I say it? If not now, when? Blessed are the cheesemakers!

Eric Idle looks on the bright side of life.

Fans of Eric Idle (I love the man) know that he's tireless in cultivating new works, as well as reinventing the Python canon, as with his huge hit, Spamalot. With Not the Messiah, Idle re-teams with composer and arranger John Du Prez, to produce not a musical, as such, but an oratorio à la Handel -- albeit with dozens more (reproductive) organ jokes. The brilliant book and score veer dazzlingly from cheeky subtlety to booming bombast, exploring a great variety of musical forms (is there such a thing as "doo-wopera"?), all in service of the tale of our bewildered hero, Brian Cohen. (In brief, this is the story of an accidental Messiah with mother issues who was born, coincidentally, one manger down from the Messiah who usually gets all the fancy gigs.) The work developed via performances around the world (I caught it in '08 at the Hollywood Bowl -- complete with onstage leafblower as an iconic celebration of Los Angeles), and this DVD (also on Blu-ray) represents the full flowering of the performance, live at London's quite snazzy Royal Albert Hall, in October of 2009.

Who's in it? Idle holds court brilliantly in a variety of roles, while Du Prez conducts the stellar BBC Symphony Orchestra and Chorus before a sold-out house (including seven wanton "Gumbys," front row, stage left). The ever-dependable Michael Palin narrates (in drag) as the transsexual mother of Sarah Palin (don't ask; just watch) -- plus he brings forth his diction-challenged "wowdy wapscallion," Pontius Pilate (among other surprises), later in the show. Terry Jones (who is Welsh) dons a hardhat (as do the choir) to sing the plaintive, outrageously incongruous coal-mining anthem, "Take Us Home" -- and Terry Gilliam shows up to play, too (but best to wait for his surprise, and only watch the splendid making-of featurette after the oratorio). Alas, the one currently-dead Python isn't in it, and neither is John Cleese -- Say no more! -- but we do get some strange Mexican (?) activity via the likes of beautiful Pythonette, Carol Cleveland, plus the "Seventh Python" himself, inimitable songsmith Neil Innes.

Imparting a lovely, faux-classical vibe to the proceedings are four trained vocalists who share the fore with Idle, and they're up to the challenge of reinterpreting Python (as only one of them bears a passing resemblance to his Life of Brian counterpart). Christopher Purves fills in nicely for Cleese as "People's Front of Judea" political rebel, Reg (among other roles), and Rosalind Plowright takes over for Jones (who is a man) as Brian's mother, Mandy. They're both great, and I hasten to add that William Ferguson (Brian) and Shannon Mercer (Brian's oblivious girlfriend, Judith) truly made me howl, especially in their horny duet, "Amourdeus" -- which sits wonderfully well in the cockeyed Python canon.

For those seeking a more specific definition of this peculiar performance ("oratorio" it is, yet more), let us say it's a comedic, sociological, theological, mythic, orchestral, choral variety show -- with fake sheep and real bagpipers. 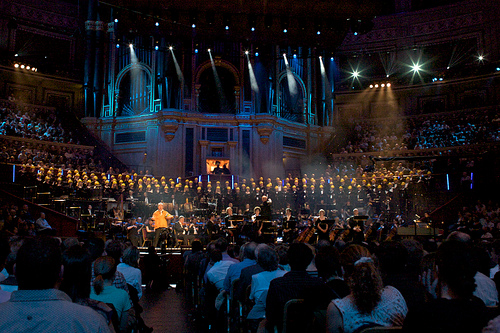 Terry Jones plus a whole lotta white people in Armani and hard-hats.

Those consumers predisposed to like Monty Python material -- the smart ones, anyway -- will not be disappointed here. While Not the Messiah is not the sketch comedy of, say, Monty Python Live at the Hollywood Bowl, it does share some material, and loads of spirit, with that concert classic (as well as the tone of the excellent Secret Policeman's Ball benefit shows over the years). Befitting what Idle calls their "ruby jubilee," this is Python tarted up extra-classy, and the Albert Hall looks astounding, as do all the performers, who absolutely beam. Even the direction (by Aubrey Powell), camerawork and editing are rock-star sexy, as if tiny helicopters were swooping through the venue, leaving no angle unlensed. While being there that night was obviously the way to go, this motion picture document crystallizes how wonderful an evening out can be, if a bunch of crazy-brilliant old friends and cohorts get together to trumpet (and French horn) their own shared legend.

I could rave up every song and moment, but editors are people too, so I'll just share three here:
1. As someone who's always found Bob Dylan amusing and kind of absurd, I guffawed (at 3 a.m.; scared the opossums) at Idle's startling transformation into ol' Uncle Bobby, strummin' and harpin' and bleatin' nearly incomprehensibly about Brian's theme of "Individuals." 2. There are many magical moments, but a wry aside as simple as: "Is it A.D. yet?" / "About a quarter to," gets me where I like to be got.
3. Those who've experienced the memorial celebration Concert for George (Harrison) may see this coming, but: If you like your men "rugged," don't skip out before the star-studded encore! 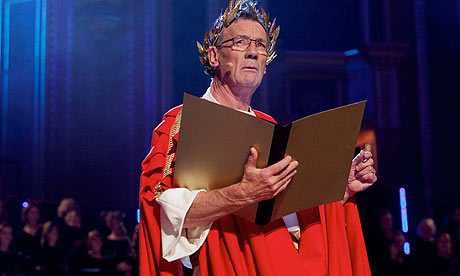 Palin (Michael) as Pilate: "Cwucify him!"

As with all of the work of Python, the underlying theme here is that it's better to be an intelligent, fun person than an ignorant, nasty person. Obviously, Life of Brian and Not the Messiah seek to bait Bible-thumpers (there's a joke about a burning Bush, and "Wepublicans" are dismissed as "a group of power-hungry, desperate people with no future"), but this is cosmic satire ("O God, You Are So Big" from The Meaning of Life is retooled as song!) rather than a specific skewering. What I mean by this is that, if you're offended by Not the Messiah, you may be a total dumb-ass.

Tech Specs (if any):

Hey man, I don't generally do DVD reviews. But I'll say this: The animated banners (for songs and guest stars) and option for onscreen lyrics (including sing-alongs) provide consumers with an experience even those lucky attendees didn't get. Um...as far as negatives go, the production is a tad lean on shots of the bagpipers -- oh, and the disc itself isn't prettily silk-screened but just printed in low-end, basic black. And the song called "The Final Song," while touching, teeters too far into bathos. Only significant complaint: How can you dilute what may be the ultimate line in all of cinéma (That'd be: "How shall we fuck off, O Lord?") in a classical piece which nonetheless has the word "twat" in it?? Okay, that's it for negatives. Back on the bright side of it all, the featurette, "The Road to Albert Hall," is a real treat -- thirty minutes of "jigsawing together" all these zany elements (in London, in just a week of prep); it gives me exactly what I've always liked best about theatre: hanging about backstage with all the cool people!

As for the Blu-ray disc, I dunno. I'm not in that league. I watch DVDs on my old iMac. Oh -- but Sony? -- kindly note: I actually bought this disc. With money. You're welcome.

Is it over for Python? Is this 40th fiesta really the end? Gosh, I certainly hope not! These fellows (and ladies, and not-exactly-ladies) may be slightly less dewy, but they've still got a hundred times the breadth and depth of their comedic heirs apparent. The Pythons could regroup and make a new movie, and I'd pay to see it ten times. I know I'm not alone in this. Am I? Hello?

Well, anyway, thanks for reading. Not the Messiah is not to be missed. Next up (speaking of features from Python alums): My exclusive interview with Terry Gilliam, regarding the very best film of 2009 -- now available on DVD -- The Imaginarium of Doctor Parnassus. Check back soon. Meanwhile, here's a classic sing-along from Not the Messiah: