All over New York today, there was something missing.

The ballet was missing it's prima donna. 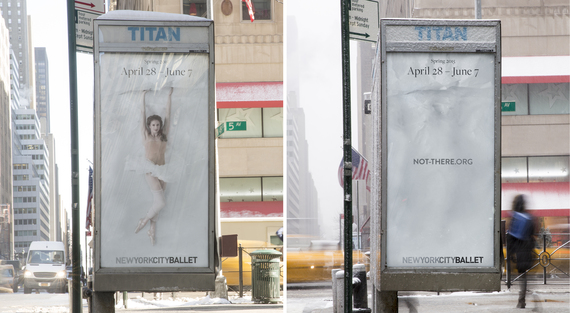 Bestselling books by Cameron Diaz and Diane Von Furstenberg (and others) were missing the faces of their beautiful authors. 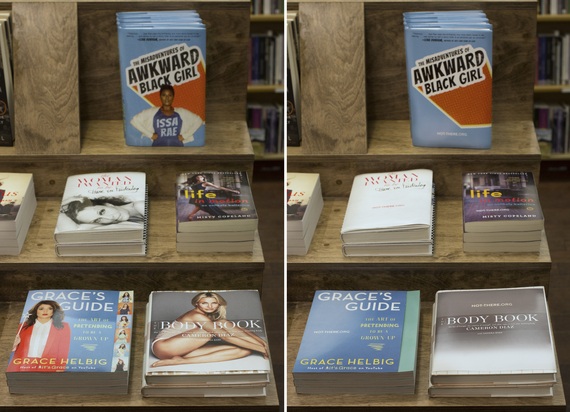 Top Chef's host Padma Lakshmi was missing from the billboard.

The Clinton Foundation wanted to highlight that, although great strides have been made to protect and promote women around the world, we are not there yet.

During an event on March 9, 2015, held at the Best Buy Theatre in New York City's Times Square, Secretary Hillary Clinton, Chairman Melinda Gates and Dr. Chelsea Clinton released The Full Participation Report, a longitudinal data crunch about the progress of women over the past 20 years, with regard to issues ranging from maternal mortality, to violence, to "no ceilings" on their full potential as citizens and beyond. Secretary Clinton sounded one key theme for the morning, saying, "There has never been a better time to be born female."

There is still a lot of work to be done, however. Secretary Clinton told the crowd of mostly women and girls that, "The story of the last 20 years tells us that progress is possible. The data provides a roadmap for the unfinished business that remains."

Below are highlights of some of the gains for women, with regard to education, opportunity and safety, as well as the gaps that still need to be addressed. If you'd like to review all of the findings, and become a part of the conversation, go to NoCeilings.org.

Health Care
Gains: Women are less likely to die while giving birth. One of the most dramatic improvements around the world has been a 42% reduction in maternal mortality, according to the Full Participation Report.

Gaps: Poor women who are living in rural regions have much higher rates of maternal mortality. Sub-Saharan Africa has a shockingly high maternal mortality ratio, at over 500 deaths per 100,000 live births. By comparison, the ratio in the developed world is closer to 0.

Data provided by the Full Participation Report. Used with permission.

Imagine a world where the celebrity faces that were missing from the ad campaigns today were gone forever because of something routine, like a hemorrhage, that could have been managed in a hospital setting or with an experienced midwife.

Sub-Saharan Africa has one of the highest rates of female deaths in the world.

Education in the U.S.
Gains: In the U.S., more women are graduating from college and advanced degrees than men.

Gaps: Yet there are still only 4.8% of female CEOs in S&P 500 companies (source: Catalyst). And the number of women graduating with a degree in computer science (and STEM related fields) has dropped from 34% in 1984 to just 18% today.

Education in the Developing World
Gains: Girls and boys are enrolled in primary school at nearly equal rates worldwide. In secondary school, the gap has narrowed to 96 girls for every 100 boys.

Gaps: However, less than 1/3 of girls in Sub-Saharan Africa and 1/2 in Southern Asia are enrolled in secondary school.

The Biggest Obstacle to Full Participation
Child marriage remains one of the biggest obstacles to full participation in the developing world. Poverty, inequality, domestic violence and lack of options and opportunities are heightened when a girl skips high school to become a mother. Niger has the highest rate of child brides. Up to 77% of women under the age of 49 were married before their 18th birthday, with 28% before the age of 15. This area also leads the world in maternal mortality.

Sustainability
Gains: The Green Belt Movement, a tree-planting campaign that began in Kenya in 1977, which was created by Nobel Peace Prize honoree Wangari Maathai is being carried on and expanded by her daughter, Wanjira Mathai. The Green Belt Movement empowered local women to plant trees, which rejuvenated land and water that had been left to waste by deforestation. The Wangari Maathai Institute for Peace and Environmental Studies at the Nairobi University, powered by the Department of State and the MacArthur Foundation, has launched Wpower to get clean energy to more than 3.5 million people over the next three years. Hazardous open fires for cooking and heating will be replaced by clean cook stoves, solar technology and bamboo biomass.

According to Ambassador Melanne Verveer, the executive director of the Georgetown Institute for Women, Peace and Security, "Only about 8% of peace negotiators are women." Speaking on stage with Secretary Clinton and Croatian President Kolinda Grabar-Kitarović, Ambassador Verveer noted that, "Almost half of the peace agreements fail within the first five years. Conflicts that are ever-present are recurring conflicts because we do not address these issues the right way in the first place."

From Northern Ireland, to Liberia, to Tunisia and beyond, women have led the march for peace and democracy with solutions that have transformed their society forever. Women who are still living in the most challenging conditions in the world have asked us to stop looking at them as victims and start looking at them as change-makers. When we empower our sisters around the world, we can start harnessing the wealth of wisdom, the holistic agenda and the hands-on experience that the under-represented female voice brings to economics, business, sustainability, health, peace and security.

We're #NotThere yet. But we are on our way.