Yesterday I found myself in the middle of a conversation about breast feeding. It's been a long time since I was an active participant. Ten-plus years since the last time my younger one, with great disinterest, turned away from my left breast. He'd given up the right a month before which left me uncomfortably lopsided, forced to wear men's large sweaters to cover the imbalance.

The new mom I was talking to, who was just starting the process with her 4-month-old, got me thinking about what breastfeeding meant to me. And to my kids.

Did it raise my children's IQ points? Did it boost their immune systems? Did we bond differently then we would have otherwise? I don't have answers to any of the above. But I know what it did for me.

I discovered a bravery I didn't know I had. Breastfeeding in public, at least for me, was a vulnerable experience bordering on terrifying. My child sobbing or screaming, my breasts swollen and aching, the nursing bra invariably getting caught in my shirt, I struggled trying to be discreet and private while trying to get a moving target latched on to my often raw nipple. I'd watch in awe at moms who casually slipped their mellow baby on while not skipping a beat. And then, one day, that was me.

It was at the MoMA, a Jackson Pollack exhibit. My older one was hungry and as I snuck behind a podium to nurse more privately a security guard rushed over to tell me I had to move. When I explained I was feeding my baby he blocked us from passing crowds making sure no one disturbed us.

I'd arrived as a comfortable breastfeeder.

Which was a journey that almost didn't happen. My first time out had a rocky start. My daughter, born a month early, spent her first five days in the hospital, being pumped full of preventative antibiotics. She couldn't latch on at first -- I was devastated they were giving her formula in bottles. Somehow failure at being able to breastfeed meant failing as a mother. Days after she came home she started wailing uncontrollably, her little belly distended as my breasts burned, knives stabbing deep through my nipples. For three months our pediatrician told me I was just a nervous first time mother. In so much pain, I had to pump just to keep the milk flowing.

Turns out she'd developed a yeast infection from all the antibiotics and had passed it to me. While telling my tale to a stranger on the street one morning she said she and her baby went through the same thing and told me what to do. A new pediatrician prescribed meds that afternoon and within two days the screaming and explosive gas stopped while I was able to go back to breastfeeding.

I was learning to trust my gut. And started advocating instead of accepting what the experts told me.

Back then I could barely whisper my breastfeeding concerns. Other mothers I met were incredibly judgmental -- the opposite of what I'd expected. Some scoffed at me for abstaining formula while others judged me for not nursing, taking the bottles I had to resort to using as a sign I was incompetent.

In those first months I was often isolated. Frustrated. Lost. I'm sure plenty of other mothers struggled as well but I wasn't comfortable or confident enough to talk about it.

But, my daughter and I eventually settled into a comfortable routine. To know I was sustaining her as she grew and soon flourished helped me make peace with that dark time. And breastfeeding itself was so often sweet and delicious. Me and my baby connected again, sharing moments ours alone.

My first nursed until she was just over a year old. There were a couple of bouts of mastitis thrown in. Lettuce leaves and breast-shaped gel packs got us back on track. Our last time was the morning she woke up with her first four teeth. We'd been down to once a day and when she bit down I knew we were done.

My son, from the beginning, was far easier and less interested. He only wanted to feed himself from the earliest of ages. There are countless photos of him, banana in his ears, peas splashed across his forehead. Nursing was too restricting, he always was twisting to see what be might be missing. Bottles and sippy cups were his path to freedom.

At one point I was addicted to pumping, producing so much milk the ice cube trays in my freezer were overflowing. I nursed on beaches, in restaurants, at a wedding while the bride and groom stopped by our table to say hello. On airplanes, at highway rest stops, deep in the night, early in the morning. At times I cherished the experience and others I exhaustedly resented that in the end it was all up to me.

And then, it was over.

Ending was bittersweet, as is so much of being a mom. While celebrating my kids' growing independence, that meant they were growing away from me.

Years later though, with a middle and a high schooler, our time together is different. But, it's still time together. My son asked me to watch every Knicks game with him this season. And my daughter can't wait to pass me in the aisles at Comic Con this fall. Entirely different experiences. But delicious nonetheless. 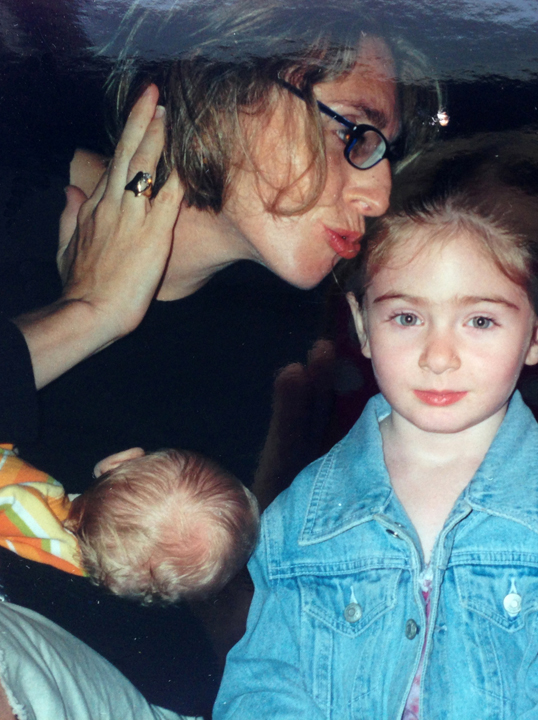