Sitting at the heart of South America is the quiet country of Paraguay. Relatively small and sparsely populated, it is a place that often seems to have been overlooked by the rest of the world.

By chance of history and geography, Paraguay has always been rather isolated and underdeveloped. To many South Americans, it is considered somewhat of a backwater where the rather ethnically homogenous population still predominantly speaks the indigenous dialect of Guarani. In the deepest parts of the Paraguayan campo (countryside), the majority of Paraguayans still practice subsistence agriculture. Despite the associated issues of poverty and inequality, Paraguayans are proud of this campesino culture and few other places in Latin America is it as prominent and pervasive as in Paraguay. 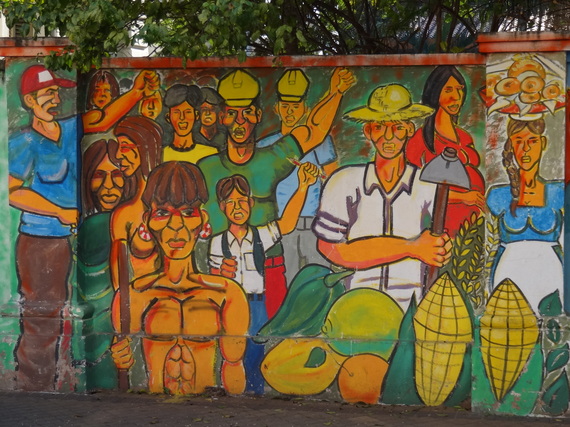 Paraguay is one of only two landlocked nations in all of the South America and it is also the second poorest on the continent. In a country that lacks both mineral wealth and oil reserves, the Paraguayan economy is very dependent on agricultural production, which typically comprises between one-fifth and one-quarter of yearly GDP. It is the agricultural sector that employs, both formally and informally, almost one-half of the whole population in a country where over 40% of people live in rural areas.

It is in places like Paraguay that the transformation of food production from small landholders to monolithic corporate industries can be seen in its relative adolescence. Traditionally, agriculture in Paraguay was the realm of small-scale producers on parcels of land under 20 hectares. Since the 1970's, however, large-scale agro-businesses, most predominantly those wielding monoculture soy, have made enormous inroads into the country. With a landmass about the size of California but with only one-sixth of the population, Paraguay is now on par with the traditional soy heavy-weights--the United States, Brazil and Argentina--as the world's fourth largest exporter.

In a recent study by Oxfam International, estimates reveal that almost 80% of cultivated land in Paraguay has been taken over by GM soy production.

Industrial soy is responsible for huge national profits, giving Paraguay one of the fastest growing economies in South America over the past four decades. But while soy beans and soy products account for almost half of all agricultural exports, they are also responsible for the corrosion of the life of the rural farmer. Monoculture soy, at the hands of Monsanto, Cargil, ADM, and with the complicity of foreign landowners and the Paraguayan state, has poisoned water supplies, increased birth defects, deteriorated health, deforested entire landscapes, decimated livelihoods and caused the general diaspora of rural families from the countryside to sprawling slums in the major cities. 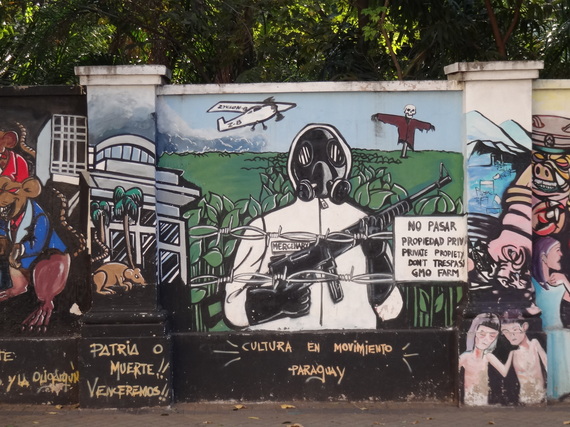 One of many anti-agro-business themed murals around the capital. Photo courtesy of Lydia Caudill.

In a country where over one-third of the population is impoverished and 19% is living in "extreme poverty", the further centralization of land and power has only functioned to exacerbate socio-economic issues. This agro-industrial complex has also tipped the political scales against the poor by forming a formidable corporate interest lobby that continues to play puppet-master with the corrupt and weak-willed congress. This was displayed most brazenly through its role in the mid-2012 parliamentary coup of the democratically elected leftist president Fernando Lugo. More recently, agro-industry concerns have found a boon companion in conservative business tycoon and reputed drug-smuggler Horacio Cartes, newly elected as president in the elections of 2013. 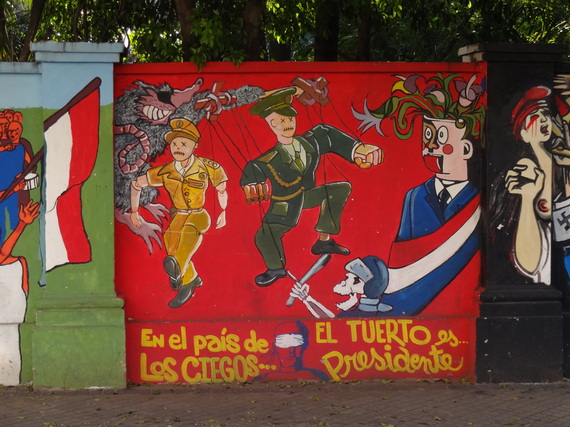 Anti-corruption graffiti reading "In a country of the blind, the one-eyed man is president". Photo courtesy of Lydia Caudill.

On a much more immediate level, for those intrepid communities who might attempt to resist the rising tide in an ocean of soy, they are doomed just the same. With its heavy reliance on highly toxic chemical inputs (specifically glyphosates), monoculture soy is poison to everything except soy. It renders water undrinkable, withers many non-genetically modified plants and crops (as herbicides such as Roundup are meant to do to everything but Roundup Ready crop varieties), and causes birth defects in livestock and humans alike. These small-scale campesinos may persist in their resistance, but their quality of life and family's health often suffer greatly for it.

What's more, such toxic fallout from industrial soy production, while denied formally by corporations and GMO advocates, has even been reportedly used intentionally as a weapon by large landowners against those few hold-out farmers. Spraying chemicals on days with high winds or just before large storms leads to increased run-off to cause maximum damage to surrounding areas. This on top of the physical presence of thugs , armed and paid by landowners, who terrorize and intimidate those impoverished farmers trying only to feed their families and maintain their traditional way of life. Since the fall of the Stroessner dictatorship in 1989, over 129 rural workers have been murdered as a result of just such conflicting land interests. 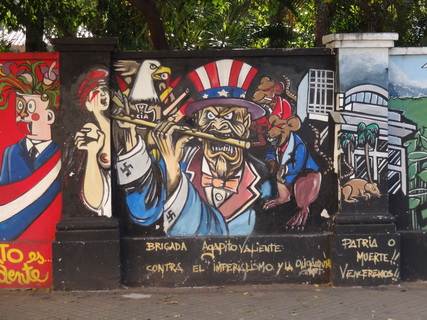 Despite these terrifying issues, the argument has been made that economic progress is worth the trade-off, that such externalities are simply the price to be paid for growing an economy in a developing nation. Perhaps there could be some merit in this position if any of this progress had actually functioned to benefit normal Paraguayan citizens. The reality is that, in a country with a long history of enormous social and economic inequality, such inequality has only gotten worse.

The GINI index, a measure of national income distribution, is one of the highest in the world for Paraguay, meaning that the country is one of the most unequal in terms of economic distribution. On top of this, it is also one of the world's most corrupt countries, consistently ranking among the worst in terms of transparency and political corruption. Even when national wealth does increase, as four decades of a growing economy no doubt have done, it stays in the pockets of an elite few landowners, politicians, military generals, police chiefs, and other parasitic officials. Despite rapid economic growth upon the alter of soy monoculture, real wages have stagnated for Paraguayans for decades and poverty continues to deepen.

Land tenure as well is incredibly unequal. While land distribution is a classic issue in almost all Latin American countries with the colonial-era baggage of the Spanish hacienda systems, it is by far at its worst in Paraguay. Over three-fourths of all fertile land is controlled by only 1% of landholders. While corporations accumulate more and more of the most fertile agricultural tracts, almost one-third (30%) of rural peasants remain landless and without even basic means of subsistence, a number which only increases each year as land reform efforts are continually thwarted by the Paraguayan congress.

Such vast inequality, especially in regards to land ownership, has led to an increase in political activity by groups such as the Campesinos Sin Tierra (landless peasant activists) who derive much of their structure and methods from similar movements in Uruguay and Brazil. The political situation in Paraguay, however, has not been quite as favorable. 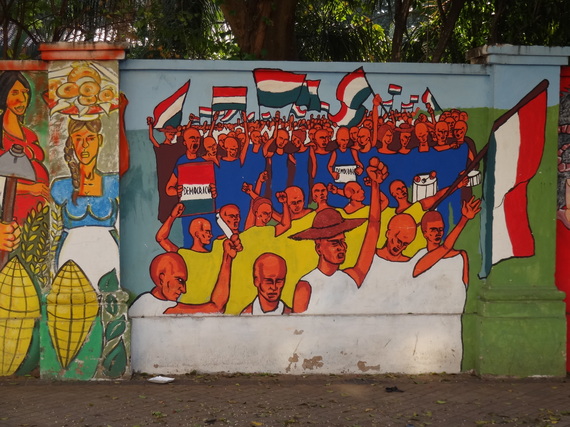 Conflict over land persists, sometimes flaring into violence. In the time I have spent in Paraguay, multiple campesino activists and organizers have been assassinated, a number of peasants gunned down, and, in a now-infamous confrontation in Curuguaty that precipitated the 2012 coup, 17 people were killed. Forced evictions of squatting farming families (desalojos as they are called) are also quite common and quite brutal (for more information, see my previous blog).

In several communities, just inside the border of the Cordillera department, where I have had the privilege of living and working for the past two years, the feeling is ominous. Being fairly active, organized and, for the most part, staunchly socialist in their political leanings, my neighbors and friends have thus far remained independent and enfranchised despite encroaching pressures from corporations, large landowners, and the government. Having already experienced their own bitter land battle following the fall of the dictatorship, they remain relatively optimistic.

"Our land is our life," remarked my neighbor one day as we worked spreading compost in his garden, "If we don't take care of it, if we don't protect it, if we don't fight for it...it will be our death." 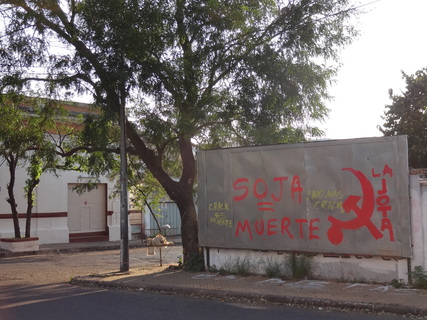 One of countless graffiti in Asuncion specifically speaking against soy production in Paraguay. It reads, "Soy = Death". Photo courtesy of Lydia Caudill.

Paraguay, like many developing countries across the world, has a national wealth and cultural identity that is tied directly to the production from its land. But it is this very land-wealth that continues to be effected by strong forces beyond its borders, most notably globalization and neo-liberal orthodoxy, often to the detriment to those many campesinos that form the backbone of this country's culture and workforce.

And while the situation remains overwhelming, it has been a constant inspiration for me to see the amazing ability of Paraguayan campesinos to simultaneously adapt and also rely upon their cultural heritage. In a country that is as new to democracy as it is to cell phones, many once-silent rural peoples are self-organizing and slowly forging a political voice to penetrate the traditionally closed halls of government. They understand what is happening, they see the damage that is being done to their society, their culture and their land and they are refusing to just let it continue unchallenged. Every day, whether in the fields or in the streets, they are working for change and for the collective future of this beautiful and unique country.

*I have been working on and researching this article for the better part of the last four months of my two year stint in this country. As I left the countryside for the last time, I hitched a ride in the back of a truck with a group of campesinos. At our feet were several hundred empty bags of GM soy seeds; the chemical smell of pesticides was pungent and nauseating.

Since I began working on this project, soy producers have penetrated further into the area where I have been living. I have heard rumors from some local farmers that the country's president may be considering large-scale evictions of all rural farmer without legal titles to their land, even those who have been working the same parcels for several decades; I cannot attest to the validity of these speculations, but given the current political trajectory it seems completely possible, perhaps even inevitable. Such policies continue without any consideration for the long-term social and environmental impacts that will result from decimating ecosystems and creating of an entire population of displaced peoples. This is a serious human rights issue that will have grave effects within Paraguay and beyond over the coming years.