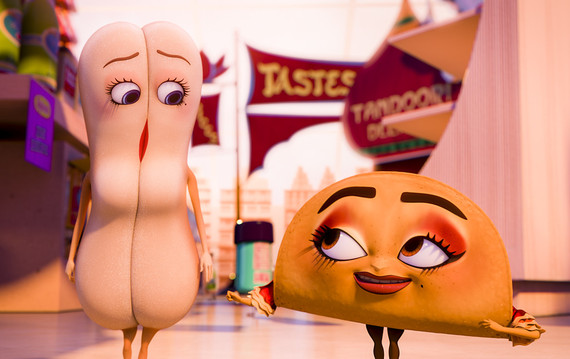 Photo: ENews!
Unless you are into hot-dog-on-bun intercourse or pita-bread-on-bagel anal sex (and you may be, no judgment here), Sausage Party is probably not the movie for you. The whole plot comes across as an excuse to display the biggest orgy in a supermarket you can ever imagine. The protagonists are not humans, of course, but rather the various items we throw into our shopping carts, usually without much thought. The visuals are purposely streamlined: less in common with the glorious (and financially prohibitive) food porn in Ratatouille than with the junk food representations in Cloudy with a Chance of Meatballs.
However, while Cloudy attempted a muted form of critique to the unbridled consumerism of the Western food system, Sausage Party stays firmly in the category of frat boy entertainment. Wrapped in the pretense of grand metaphysical reflection about religion, prejudice, and free will - should we believe in what everybody else believes, or rather take the less beaten path? - the movie strangely does not offer much reflection about its subject matter: food. Here and there, it offers jabs at food that never goes bad (the Un-perishable Twinky, Fire Water, and Grits), at the unskilled employees in large stores, at the rush to feasting around major holidays. But despite the final food vengeance against humans, these themes remain in the background, while grits gleefully assault crackers and a sultry taco fantasizes of enjoying cunnilingus with a pure white bread lady.
The taco, voiced by Selma Hayek, not so subtly harkens back to the old days when a banana dressed in a fashion that most Americans would think of as Latin made her appearance on the silver screen to promote a product that was wrecking political havoc in Central and South America. Following in the footsteps of the Brazilian bombshell Carmen Miranda, Miss Chiquita Banana was a tremendous hit, inspiring songs and a series of cartoons that followed her adventures.
The first one, released in 1945, shows Miss Chiquita getting off a ship that has transported her from a tropical place to North America, where she explains the use of bananas to a group of silent, formally dressed, and mostly overweight white men - the welcome committee for whom she is performing. After reminding viewers that they should not put bananas in the refrigerator, she goes on extolling the healthiness of the fruit, especially for children.
Many of the bananas in the cartoon are actually moving and speaking characters, but it is Miss Chiquita that steals the scene with her fluttering eyes and long eyelashes. The tip of her head goes through her hat, replacing the bananas that were visible in Miranda's costume but reinforcing the identification between fruit and character. Her elongated form allows her sinuous movements, and her low-waist dress reveals most of her body, building on the stereotype of the hot-blooded and sensual Latina, all the way to her hip shake and her winking "si si si si." Miss Chiquita's performance would appear as focused on male desires, which seems contradictory as the target of the commercial were women, not only as buyers and consumers but also as nurturers and caregivers. They are reminded of the positive impact of bananas on the health of their children, while being taught that bananas can be used as desserts and as sources of proper gustatory pleasures for women.
The theme song of the commercial was so successful that the Terry Twins recorded it in 1946. The video performance is a Latino equivalent of black face, with two white female performers trying to pass for exotic characters, by adopting clothing and moves that would be identified by viewers as Tropical. The music and the rhythm alternate between Caribbean rhythms and swing music, although the dance moves lack the sensuality that Miss Chiquita flaunts in the cartoons. Also the singers' dresses do not have the same vivid colors as the fictional character, creating the impression of an overall pale impression of the original.
The taco in Sausage Party comes out of the same tradition of facile ethnic humor, surrounded as she is by Mexican foods in ponchos and sombreros, and Chinese soy sauce bottles with pencil-thin moustaches and conical hats. While the total absence of political correctness is not surprising - a mainstay in this kind of comedy - it also reflects as certain laziness and lack of originality. We have already seen it. From M&Ms to the Pillsbury doughboy, from Wendy's patties to Japanese kawaii characters , we are familiar with foods enticing us to devour them. Hot dogs and buns had already appeared in animated commercials. True, we had never seen them engaged in sweaty sex, but is it really such a major breakthrough?