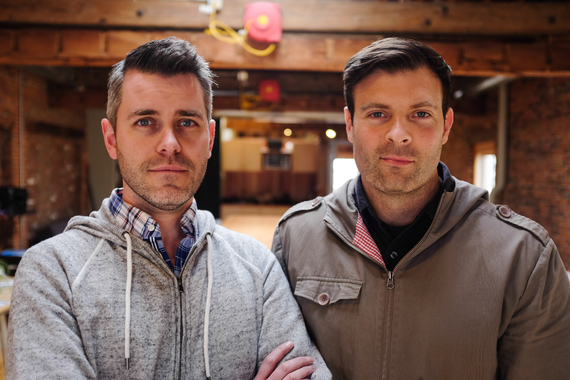 One of the more fascinating pieces of data I've seen in a while showed that design-driven companies outperform the S&P by 228% over 10 years. We see evidence of this shift toward design in places like the venture capital firm Kleiner Perkins who hired John Maeda away from his job as President of design school RISD in order to lead that firm to become more design and innovation focused. We see multinational firms gobbling up human-centered design shops to give them an innovation edge.

So, I started looking for examples of design-driven businesses here in Vermont. One of the first ones to grab my attention was Notabli, a private social network and curated archive that allows parents to safely share moments in their children's lives with family and close friends. Two designers, Jackson Latka and Jory Raphael started the business that has now grown into a larger company called Parent Co. I talked with Jackson and Jory about how they designed their new business.

Rich: You two had solid reputations in Vermont as great Web and visual designers. How or why did you shift into designing a new business?

Jackson: Notabli started out of a frustration I had. I was going through some significant life changes and I felt like there had to be a better way of sharing them. I didn't want to put it in the stream on Facebook where it would go unnoticed and disappear. It felt bigger than that. I needed a place to share a little bit of big news. My original thought was to allow users to create one-page websites for events that would save these moments in time.

Jory: Jackson reached out to me with this idea, and we started working on the life event approach, but quickly realized that "shareable" life events were few and far between. You might not use it more than once a year, which seemed too seldom to us. It wasn't sustainable. We were both new(ish) dads and it made sense to give the project a focus: kids & childhood. We did this to solve some of the needs we had as parents and reflected a focus we had and will have in our lives for a number of years. Our goal was always to create a "Minimum Lovable Product."

RN: That's a great example of the design process of challenging hypothesis and evolving into new stages of creativity and innovation. How did the process continue to evolve the product?

Jackson: We kept discussing back and forth between starting with mobile or the Web. I kept pushing for the Web, mostly because I used a digital SLR camera and the pictures were the big items I wanted to share, rather than the crappy iPhone 3 pics I took with my phone. Jory was the mobile-first guy. We started creating visual mock-ups for a Notabli Web site until the iPhone 4 came out. I remember Jory and I were at a conference in NYC. He took a picture with his 4 and compared it to the same picture I took with my 3. After that, I was sold: we went mobile all the way.

Jory: Designers are usually not so good at critiquing each other's work. We brought in friends and family to keep testing our prototypes both from a design and functional standpoint. The visual look and feel was obviously important to us. We were going for a certain type of feel. It had to be aesthetically pleasing but most of all, the design needed to stay out of the way of the user. We're weren't focused on wow-ing people with what it looked like; we were trying to make sure the design didn't distract anyone. It had to be clean and simple. The app was about the content, not about beautiful buttons.

RN: One of the assumptions most of us have is that designers focus mostly on the visual look and feel. It's one of the biggest misconceptions around human-centered design and design-driven entrepreneurship. Is that where you spent most of your time?

Jackson: The more important work for us was designing the actual functionality. There were a lot of kid-focused Web sites geared toward mothers. Those sites seemed to narrow the role of moms and dads. The scrapbooking sites focused on moms while dads managed the camera. The iPhone app combined those and made it a more appealing product to fathers like us. We wanted people to feel cool when they used Notabli. The content is so emotional, it's all about your kids, and we wanted people to feel that when they were using it. We wanted it to be friendly and interesting.

Jory: We also put some design constraints around the features and we're still doing it. We decided to limit the app to five main types of content: photos, video, audio, quotes and notes. We limit the length of a video you can share; we think a minute is enough. We've made a promise to our customers that the content is theirs and it is here forever. We're going to give it back to you better than we found it, and at any time you want it. Our promise is integral to the design of our business; it has to make people understand that they can trust us. We kept asking ourselves: What would it take for me to use this app?

Jackson: We feel that the design constraints made Notabli a better company. We get lots of requests for new features but we're pretty careful about what we decide to add. Notabli is the only social network that is not about YOU. It's about your kids. It's for you and your kids but it's also for your family and friends. It gives you a safe place to share some of the most interesting and valuable parts of your life without having to share it with Everyone. The flip side of this is that I only see pictures of kids that I know, personally. I feel like I'm part of their lives.

RN: How do you validate this beside your own experiences?

Jory: One of the ways I know we hit the right nerve is that I never hear my parents or in-laws saying "Look how big he's gotten" about one of my kids. They may live across the country, or across the globe, but they're seeing and hearing them all the time through Notabli. I think the grandparents might be the happiest users of the app, to be honest. Our hypothesis with this business is that the social Web is in its infancy and that ultimately it will be a huge part of our lives where we can both experience and re-experience things.

Jackson: We're continuing to evolve Notabli. After a few years of Jory and I trying to squeeze Notabli into our working and non-working lives, we had the opportunity to grow the business. We joined forces with Tom O'Leary and Mike Dececco, who had experience at companies like Dealer.com, Tesla, and eBay and formed Parent Co. Notabli is now part of a larger vision around parenthood. The bigger venture gives us greater experience and opportunity for growth. We've been working hard on Notabli for Android and our newly release Notabli on the web. We also recently launched a new content-focused website called Parent.co (http://parent.co) which is a place where we share stories and inspirations about modern parenthood.

RN: Getting bigger with more money always sounds great but it can pose some challenges in itself. What are some of the ways that your growth has changed the way you do business?

Jory: The fun thing now is that we've done a better job of formalizing our design process. We collaborate more, we do more low-fidelity prototypes and testing, and we dig deeper into people's needs. We bring in more people from the outside all through our process from beginning to end so that we can continue to design with real people in mind. It's a blast. But now we can focus on what we do best, too, rather than trying to do it all.

Jackson: We continue to design our business for parents in a way that's in line with our core values. Ultimately we expect that we'll build enough value into our products that people will willingly pay for them. We're making sure that we're staying true to ourselves, and that we're continuing to keep investing our blood, sweat, tears and love. After all, Notabli is still the only app I open up that I know will make me smile.