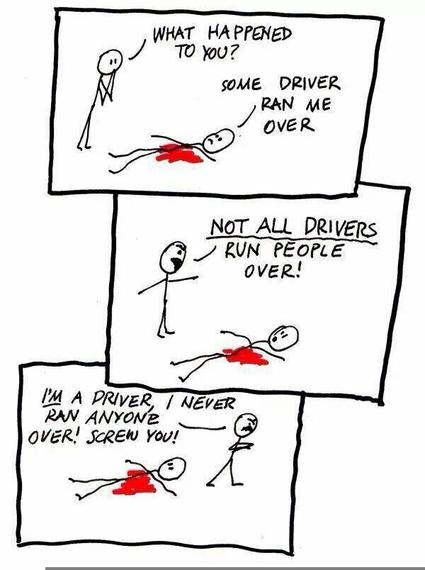 The #NotAllMen meme has been running its course over the past few week with helpfully responses from #AllWomen who remind us all (but especially men) that while not all men are misogynistic jerks, all women are subjected to those who are. I actually think the notion that not all men are misogynistic deserves to be challenged. I consider myself to be a feminist. I actively work to challenge and correct instances of patriarchy wherever I witness them. But as any of the women who are close to me can tell you, I am also sometimes unaware of the ways my male privilege shows through and effects my behavior when I'm not on my guard.

This cultural phenomenon has had me thinking about Christian privilege. A couple of months ago I was having one of those long Facebook discussions on my timeline when someone brought up how unpopular it is to be Christian in the culture today. They felt a little beat up by someone who expressed their negative views about Christianity in some admittedly broad-brushed ways. Naturally, in the midst of my Year Without God, I was not prone to sympathize with him. I found myself making the following comparison: Christians complaining about religious discrimination in America is like white people complaining about "reverse racism." It's a basic category mistake. Racism is, by definition, a white problem (and I'm using the word "white" in a sociological sense, before everyone throws their hands up and says, #NotAllWhitePeople). Black people can exhibit racial bias like everyone else, but as a structural problem, there is no reverse racism. It doesn't exist. White people are privileged. I'm not asking our frat boy friend, Tal Fortgang, or anyone else to apologize for their privilege. I've tried that myself and it just leads to loads of self-recrimination and I'm good enough at that already). But I am asking for people to acknowledge their privilege. And then, once you've acknowledged it (the first step is admitting you have a problem) take steps to level the playing field in whatever ways are available to you. And by all means, don't make excuses for white people. You just embarrass us all.

It dawned on me, in the midst of that conversation, that I needed to add one more privilege to my long list of privileges. I used to tell my Cultural Studies students that some of us tick all the boxes when it comes to privilege. I certainly do. I am a straight, cisgendered, middle class, able-bodied, highly educated white male. It doesn't get more privileged than that. Or does it? I am also a Christian. Or I was.

I don't need to rehearse all the ways Christians are privileged in the United States. All I really need to do is point to the recent reports that show that non-christians and especially atheists, are the most feared and distrusted people in our society. So it's interesting to me when Christians complain about "angry atheists" or the way in which Christians get abused by secularists and non-believers. Suddenly, in a moment of irony, Christians are pleading for tolerance and understanding. I'm all for tolerance. In fact, I think tolerance is the least we can do when we're talking about people. (Ideas are altogether different. Ideas deserve, not tolerance, but examination and testing).

The purpose of The NALT Christians Project is to give any and all LGBT-affirming Christians a means of sharing their belief that there is nothing anti-biblical or sinful about being gay, lesbian, bisexual or transgender.

Aside from the fact that it's highly debatable that the Bible is not anti-gay, the organization exists essentially as a PR campaign for progressive, LGBT-affirming Christians. It's not hard to understand why progressive Christians feel they need this PR boost. Still, even when I was a Christian, something unsettled me about this. I didn't like the way it created another Us vs. Them division in the church, or tried to throw the less progressive Christians under the bus rather than address the core problem (the Bible's view of gay people, women, and others). I also didn't like how it came off defensive. It doesn't appear to be about LGBT people as much as Christians. We're not all like that. Meaning: don't put all of us Christians in the same category. Christians are now the victims, apparently.

The website even declares, "inspired by It Gets Better Project," Dan Savage's remarkable effort to communicate hope to LGBT youth, from their older LBGT brothers and sisters. But here's the thing. It Gets Better is about reaching out to the oppressed--LGBT youth who are at a staggering risk of suicide and other life threatening risks inherent in systematic marginalization. Being Chrisitian is nothing like that.

For the past few days, the #NotAll meme has spread to include Christians, which makes me want to say the same thing to them that I would say to a man making the #NotAllMen argument. Yes, I agree with you. Not all Christians are narrow-minded, literalist, bigots. I was one of those Christians trying stem the tide of ignorance and bigotry. I even made a few personal sacrifices to stand by my conviction that Christianity was better than its reputation in the media. So, while I agree that #NotAllChristians match the stereotype, your role is not to complain about being marginalized. Your role is to Christian-up, role up your sleeves, and stand with the victims of your religion. Repeat after me: you are not being marginalized. In the few specific cases where Christians are actually treated unfairly, I do feel for them, but honestly, welcome to how the rest of the non-Christian world has been treated for the past 2000 years.

Like decent men, progressive Christians, by virtue of their identification with the offending group, owe it to all of us, but especially the victims, to own the abuse caused by your people, work diligently to call out the problems and rectify them wherever possible, not distance yourself from them.

There is one major difference between #NotAllMen and #NotAllChristians. Men cannot stop being men. Christians can, if they choose, disassociate with the Christian church. I'm not saying that they should or that it would be the most prudent move, but the option is there. But even if Christians feel they have no choice because their identity is so deeply engrained in them (irony abounds), they can stop trying to have it both ways -- being a Christian while trying evade the worst elements of it.

As a man, if I heard another man make the #NotAllMen argument, I would reply, "Yes, I agree. I try not to be 'one of those types' of men either, but lets face it, we are a threat to women." Likewise, truly progressive Christians should say, "Yes, I agree. I'm trying not to be 'one of those types' of Christians, but we are a privileged class that, on the whole, tries to legislate our belief system and limit the freedoms (to say the least) of those not like us, so we need to stand in with our marginalized brothers and sisters and take the heat."

So, please, to my Christians readers, let's not start with the #NotAllChristians nonsense. If you don't want people to think Christians are like that, start being different. And get a bunch of your Christian friends to be different with you. Talk is cheap. Let your lives speak.