The populist president just revived what will be a bad economic deal for Midwest gas prices and American jobs, the Keystone XL pipeline.

My nonprofit group Consumer Watchdog studied the issue in 2013 and found that the Keystone XL extension was a way to move Canadian crude to Asia through the gulf coast, which would re-route cheap crude that now feeds Midwest refineries. The likely result: higher Midwest gasoline prices. 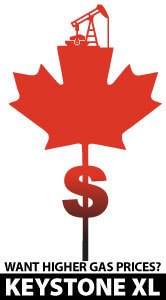 President Obama nodded to the analysis in delaying the deal. Under scrutiny, the deal as proposed produced very few US jobs.

The report found that:

•Drivers, especially in the Midwest, would pay 20 cents to 40 cents more at the pump if the disputed pipeline were built, as the current discount of up to $30 a barrel for Canadian oil disappears.

•The true goal of multinational oil companies and Canadian politicians backing the pipeline is to reach export outlets outside the U.S. for tar sands oil and refined fuels, which would drive up the oil's price.

•With U.S. oil production rising fast, any "energy security" benefit for the U.S. would vanish as American oil output was expected to exceed that of Saudi Arabia in about 2020, according to the International Energy Agency.

"Keystone XL is not an economic benefit to Americans who will see higher gas prices and bear all the risks of the pipeline," said report author Judy Dugan. "The pipeline is being built through America, but not for Americans."

The report found that Canadian crude oil currently being sent to the Midwest from Canada would be easily diverted to Keystone XL to satisfy overseas demand.

Much of the Canadian oil would go directly to Gulf Coast refineries owned by the same multinational companies investing in tar sands. These companies include Exxon Mobil, former employer of Trump's Secretary of State nominee Rex Tillerson, Chevron, Koch Industries, Marathon Oil and Shell Oi. Gulf refineries would refine the tar sands crude oil into diesel oil, which is in high overseas demand, and gasoline for export.

Political leaders in the Canadian province of British Columbia have opposed plans for a major new tar sands oil pipeline from Alberta through their province to the Pacific Coast. TThis Canadian opposition increases the motivation of tar sands investors and developers and to get Keystone XL built as sure access to overseas markets.

"Any reduction of deliveries to Midwest refineries would crimp gasoline supply, further driving up pump prices, and Keystone XL's backers want to move cheap oil out of the Midwest," said report author Judy Dugan. "Many major Midwest refineries have also made expensive changes to maximize their use of the tar sands oil and could not operate as efficiently using different grades of oil from other sources."

While the pipeline developers have insisted that the pipeline would create tens of thousands of jobs, they have offered no proof of substantial jobs created beyond construction and maintenance of the pipeline itself, the report said.

The conclusion : "U.S. consumers should be wary of the Keystone XL pipeline--not just for substantial environmental and safety reasons, but because it threatens their wallets. Given the fleeting benefits of construction jobs, the unprovability of long-term benefits and the negative effect of higher gasoline costs on consumers, Keystone XL is no economic boon to the United States. U.S. consumers and the overall economy would bear the substantial risks of the pipeline without measurable permanent benefits"