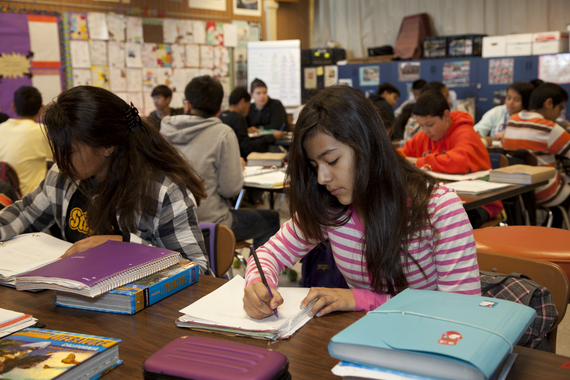 Some Texas superintendents are flexing their muscles again. Last year, a passel of them persuaded state legislators to drastically roll back the number of end-of-course exams that high school students must pass to graduate. Now, some superintendents are questioning the wisdom of the state's overall accountability system, which includes standardized tests in grades three through eight.

Of course, rebellion against standardized exams also is underway in states like Oklahoma, Indiana and Tennessee. The revolt there is partly stoked by the national Common Core standards, which include testing. It also is being sparked by teacher evaluations that include data from various test scores.

What is risky about this uproar is that it drives America away from the international norm. That could have consequences for our children's economic opportunities once they finish school. We can debate all we want about how many tests are given, but are we prepared to walk away from the tool numerous nations use to prepare their students for the world?

The fact is, countries on the make are dead serious about testing. And their exams often have far more consequences than ours.

Let's start with how testing has helped, including here in the United States.

A range of nations use tests to help close the gaps between their poor and more affluent students. Exams identify problems, often to the benefit of students.

The Program for International Student Assessment, which looks at the educational achievement of nations around the world, has found that "...performance differences between schools with students of different social backgrounds are, on average, lower in countries that use standardised tests."

That includes in the U.S., at least when we upheld the value of testing.

Data from the National Center for Education Statistics show a growth of two grade levels in reading for nine-year old black and Hispanic students between 1990 and 2008. They made those gains on the National Assessment for Educational Progress. Interestingly, the results correspond with when the emphasis at the federal and state level was on testing students annually and objectively and using the results to hold schools accountable for the outcomes.

Now, let's talk about what high-stakes testing really means. The term has become so much a part of the education chatter that you would think we have a make-or-break system for American kids. But here, too, look around the world. We don't come close to high-stakes. Our tests are not killers like they are in a number of other countries.

Amanda Ripley reports on this reality as well in her excellent book, The Smartest Kids in the World. She explains that testing in nations like South Korea determines the fate of students far more than it does in the United States.

Yes, the SAT and ACT affect college admission decisions here. But, as Ripley notes, the stakes are not really so high for U.S. students on their standardized tests.

If there are consequences, they largely are for schools and teachers. Their campuses may be subject to interventions if they do not serve their students well. Or teachers may receive a low evaluation because of an under-performing classroom.

In South Korea, test results directly affect a student. A make-or-break exam determines whether a high school student qualifies for one of a few prestigious universities. If a student does well on that exam, he or she is looking at a lifetime of greater earnings. If not, the student's horizons quickly grow limited. As a result, South Korean students face enormous pressure to ace the test.

To be honest, I would not want my kids in a system like that. But South Korea did not do this for some punitive reason. It did this so the country could become a greater economic power. South Korea bet on human capital as a way to grow.

The lesson in all this, especially for those who may think we are overdoing the testing thing, is to look around the world. Other nations are testing their students to see whether they are ready for the world, including the competitive international marketplace, where our students are largely headed.

Don't we want to know whether our kids are ready, too?

William McKenzie is editorial director at the George W. Bush Institute in Dallas.