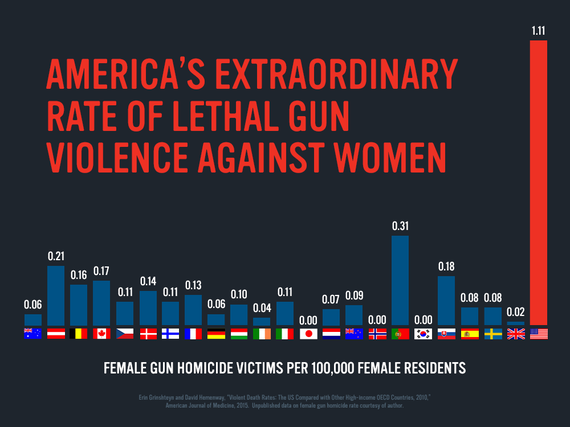 Surely no one missed the shot heard round the world on Friday: demeaning and abusive comments about women by Donald Trump, the Republican candidate for president.

But you may have missed an important response by Richard Martinez, whose son was killed in the shooting near UC Santa Barbara in 2014. Prior to the shooting, the gunman videotaped a misogynist manifesto blaming his actions on being sexually rejected by women.

Martinez wrote, "My son was shot and killed by someone who was motivated in large part by misogyny - the same thinking we see from Donald Trump. This isn't just 'locker room talk.' It's dangerous and has real consequences."

Sadly, the mindset of the UC Santa Barbara shooter is not far removed from the disgusting and dangerous statements by Trump, which were also made in reference to a woman who rejected his sexual advances.

And the consequences of this violent mindset are grave.

According to the Rape, Abuse & Incest National Network, one out of every six women in the U.S. has been the victim of an attempted or completed rape in her lifetime, and nine of every 10 adult victims of sexual assault in the U.S. are female. Americans aged 12 to 34 are at the highest risk for rape and sexual assault, according to RAINN.

The National Rifle Association, one of the most powerful lobbies in America, is shamelessly exploiting this epidemic to market guns to women. The NRA endorsed Trump last spring and has spent more than $17 million on advertising to support his candidacy. Last week, the NRA kicked off a $6.5 million advertising blitz in swing states focused on women and guns.

The NRA erroneously claims that guns make women safer and can protect them from sexual assault, claiming that "real women's empowerment" means being able to carry a firearm to shoot attackers.

But the NRA's marketing is based on a false narrative that most sexual predators are strangers jumping out of the bushes and attacking women. In fact, most victims of sexual violence (three out of four) are attacked by someone they know, according to RAINN. Forty-three percent of rapes are perpetrated by a friend or acquaintance, and 27 percent are perpetrated by a current or former spouse or significant other, according to RAINN.

The idea that women are going to be armed to the teeth to fend off people they know is absurd, and places the onus on the victim to be "at the ready" at all times. That's not the way American women want to live our lives, and it actually increases the likelihood we'll be shot. One recent study found that if someone is in possession of a firearm when attacked, they are four times more likely to be shot during the assault.

So instead of arming all "moms, grandmothers and professional women" as the NRA suggests, what if we worked to change the culture and legal system that enables rapists? That starts with refusing to endorse and elect a presidential candidate who suggests powerful men should grab women "by the pussy."

In fact, the NRA's support of Trump begs an important question: Do they advocate women carry guns to defend themselves from sexual predators like one they've endorsed for president?

The stunning hypocrisy of the NRA combined with the sexually abusive comments by Trump make gun violence an even more crucial issue for women in the upcoming election.

Recent polling by EMILY's List found that gun safety is an electoral priority for women in 2016: supporting background checks to purchase guns is an important issue for all women when it comes to making decisions about voting. And women of color are particularly concerned about the threat of gun violence, reporting that gun violence is their highest security concern, and the most important issue for the next Congress to address.

Gun violence has become an issue so important to women that they will remember where candidates stand on gun safety when they go to the polls in November.

That's because American women are 16 times more likely to be killed with guns than women in other high-income countries. On average, 51 American women are shot to death by a current or former intimate partner every month. And the majority of mass shootings in the U.S. - 57 percent - involve domestic violence, according to Everytown for Gun Safety.

Rape culture, sexual violence and guns are a toxic brew created by extremist politicians and lobbyists. The antidote is for women - who make up a majority of the voting electorate - to vote in their own best interests, and vote out special interests in November.

Donald Trump has a shameful record of degrading women, inciting violence and being wholly aligned with the extremist gun lobby agenda of more guns for anyone, anywhere, no questions asked - the choice for women is clear: vote Hillary Clinton on November 8.