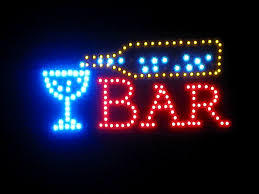 There is a faint whiff of Clorox. The grim tennis metaphor is not shot, however. Two sets are playing doubles on the stools. An argument. Two men against two women -- Trump is the ball flying back and forth.

Jimmy whizzes on but I've left the court of his presence and wandered into this new convo, thinking about the name Trump and how headline writers of the tabloid cult will fire off ink bombs if the White House is rebranded, the Trump House.

THINGS THAT GO TRUMP IN THE NIGHT.
TRUMP TO PLAY THE TRUMPET AT TRUMP HOUSE BALL.
TRUMP-ROMPS IN IOWA

and now I am back, present and correct, and Jimmy is saying, Hey man? let me tell you about tennis ace, Bjorn Borg. He was Swedish and...

I put ABBA on the jukebox and listen to "MONEY MONEY MONEY" until I just can't take it anymore!