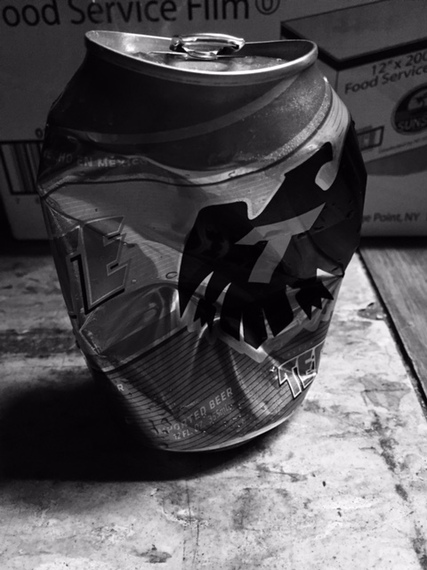 John escapes from the rehab nuthouse. Vanishes down the lane, straight to the bar stool. They thought I'd be a prisoner, he says. I hand him a Tecate.

They're out there looking for him. Men in white coats with sniffers that can detect the pop of a Tecate can being opened. They want their prisoner back. They lock him up to free him from addiction to tinned beer. And the prostitutes, cocaine and melancholia that comes afterwards.

He pulls! Spray everywhere, a fountain of froth, he slurps, his nostrils suck up the flavor. Downed in one gulp, the can crushed in hand, a vicious grimace. Freedom, he says, then vanishes into a silence that burns holes in his eyes. After six cans, a mangled pyramid of tin is built on the bar. I should be firing them into the recycle of history but I leave them there, preserved in the architectural history of the world.
.
A siren rages past the door. John looks up. They're coming to get me, he says. They have a big net to throw over me and drag me back to that place. Tell them to stop!
The word he fears most.
STOP!
But his brother still killed himself.
STOP!
But his dad still ran away.
STOP!
But guys on motorbikes still beat him up.
STOP!
Drinking, it will kill you.

And the pop from the tin goes straight through his body. And I'm the one who hands it to him like the servant at dawn placing the pistol in the hand of the duelist.