Kensington Explorer in Residence, Brett Rogers, is a documentary filmmaker and outdoor enthusiast with a special interest in the world's mightiest rivers. Leading expeditions everywhere from the Mekong to the Mississippi, Brett focuses on the compelling stories, secrets, and unforgiving conditions of each region he visits. Recently, Brett's travels found him in India, uncovering the secrets of the holy Ganges River. An intense journey of learning from start to finish, Brett came home with five, life-changing lessons he learned from this sacred land and its fascinating people.

India is one of the world's most mesmerizing countries. I went there to explore the River Ganges on a three week expedition with three friends. We rented a big old wooden row boat from a man named Ravi who came along with the rental. Rowing down the river, floating past villages lost in time, it was an incredible experience I think back on often.

To the world's 900 million Hindus, the River Ganges is worshipped as the goddess Ganga, making this river the most worshipped river on earth. For the rest of the world, the Ganges is seen as one of the world's most heavily populated and polluted rivers. Hindus believe that a dip in the Ganges will purify one's soul from a lifetime of sin. For me, the chance to wash away 30 plus years of bad judgment was an opportunity I could not pass up. I decided to take my swim in the foothills of the Himalayas, where the Ganges leaves the mountains before spilling out onto the great plains of India. I can honestly say it was one of the greatest spiritual experiences of my life. Placebo or not, I felt renewed in a way I cannot put in words. If you've come all this way, why not take a dip in the Ganges -- what's the worst that can happen?

2. You will see dead people.

During our expedition we passed dozens of riverside cremations that took place on the steps of ancient ghats and impromptu sandy beaches. The typical cremation tended to have a few dozen people standing around a body wrapped in fine silks engulfed in a roaring fire. But not everyone is cremated, for reasons I still do not understand. People who have been bitten by snakes, pregnant women and children under five, are simply dumped into the river, to be consumed by the river. I vividly remember witnessing a pack of feral dogs devouring human remains a short distance from a group of women doing laundry along the river bank. At first, seeing a half cremated body floating by, or being eaten by dogs on land, is a shock, but after a while, it becomes yet another sign of the river's symbolism of life and death.

3. Don't mess with the monkeys.

We had just checked into our hotel, a lovely establishment that overlooked the River Ganges in the heart of Varanasi. As we walked across the balcony to get into our room, two large monkeys stood in our way. The one hissed before faking a charge to test our resolve. Later that night when I was asleep, our hotel came under attack. It honestly sounded like an entire village was being murdered, but it turns out it was just the monkeys having a party on the terrace of the hotel. When I woke up in the morning, I was amazed to see the entire balcony completely trashed. The monkeys had knocked over large potted plants, thrown chairs and left a brigade of monkey poop everywhere. As I walked out, many of the monkeys were still perched on top of the rooftop overlooking us, showing their teeth while grooming one another. Simply put, urban monkeys in India are like a ruthless gang; they steal food, incite fear and will do whatever it takes to get there way. Watch out.

The food in India is off-the-hook amazing. If you enjoy Indian at home, eating Indian in India is a whole other experience. The food quality, in terms of deliciousness, is consistent, from big five star hotels, to eating a curry dish with your fingers on the shores of the Ganges. Half the time, I had no clue what I was eating, I just ate away. At the start, we were of course a little paranoid that we would get sick from the food, but after few days, we lost the fear and just enjoyed the Indian cuisine. That being said, there are a few things you can do to help minimize your chances of getting sick. Always drink bottled water that is clearly sealed, eat vegetarian and avoid dairy. It's important to still be prepared for illness just in case. Bring an assortment of medicines -- Gravol, ibuprofen and electorates that can deal with different symptoms, and of course, keep those hands sanitized before you eat any meal.

After a long, 16-hour day of travel by train, van and bus, we took a tuk-tuk to the hotel after being dropped off in the middle of the city. Two young boys sat with the driver of the beat up tuk-tuk, as the four of us crammed into the back of the cart with our gear on our way to the hotel. It was not until the next morning that I realized I had forgotten my DSLR and iPhone on the tuk-tuk! We spent the rest of day in the market buying food and supplies, and returned to the hotel to find the two young boys from the tuk-tuk waiting for us. The driver had found our bag, and sent the boys to grab us and return our belongings. Forget any negative preconceptions you might have about traveling in India, the people here are kind and full of surprises, and can quickly turn your day from traveler's worst nightmare to a wonderful reminder of how kind people can be. 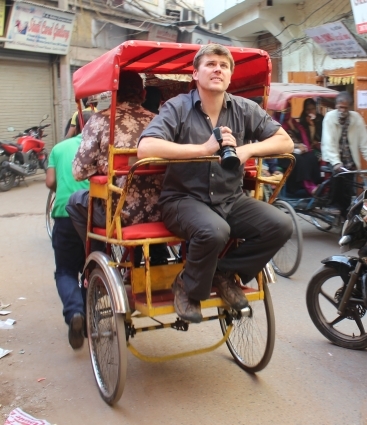