I'm extremely grateful to be invited to share my voice alongside all these incredible women on International Women's Day. As an ambassador for the global health organization PSI (Population Services International), I've been fortunate to have traveled to places like the Central African Republic and Southern Sudan where I have met amazing women who rival the likes of the women on this site today.

Last fall, I traveled to the Central African Republic -- a country where malaria is responsible for approximately half of all hospital visits. I was there to help launch a United Nations Foundation's Nothing But Nets campaign that would provide a net to every family in need in the country.

As part of the trip, I visited a local health clinic in a rural part of the capital city, Bangui. There, I met a woman named Sophie who was with her husband and newborn baby. Her baby was inconsolable, crying from pain and hot to touch with a high fever. This was the second time Sophie had been at the clinic with her daughter. The first time her daughter she was only mildly ill, but the health clinic didn't have any anti-malaria treatment in stock. So they referred her to the local hospital, which was an expensive bus ride away. When Sophie arrived at the hospital she realized that they couldn't afford the medication. So she took the little remaining money she had and purchased syringes. Then she walked back to the rural health clinic and begged the doctor there to give them the medication for free. Sophie was willing to inject her daughter herself if she thought it could save her life. 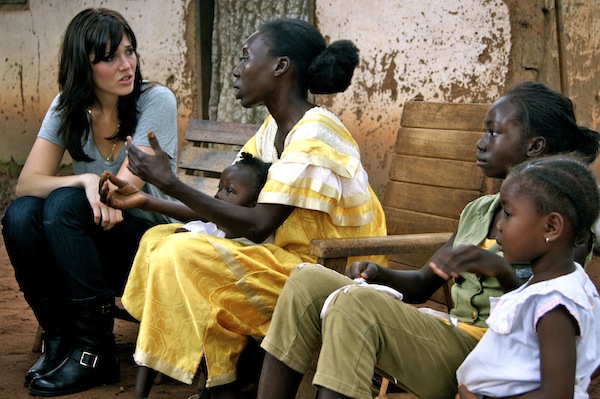 That's when I met them. The health clinic had no medication, Sophie had no money, and her daughter's fever was worsening by the minute. Luckily, in her case, we were able to give her the money needed to return to the hospital by cab and purchase the right treatments.

That was the last time I saw Sophie and her baby. I often think of them and hope that they're okay. But I can't help but wonder what will happen the next time her daughter is bitten by a malaria-carrying mosquito, when there's no group of Westerners at the clinic willing to pay her way.

Thankfully, there's hope for mothers like her. Long-lasting, insecticide-treated mosquito nets are one of the most cost-effective and cost-efficient ways of preventing malaria. Nets can prevent malaria transmission by up to 90 percent, and through the Nothing But Nets campaign that I helped launch, the government of Central African Republic and its partners at PSI and UNICEF were able to distribute nearly 1 million mosquito nets -- one for every family in need.

At the same time, thanks to a grant from the Global Fund to Fight AIDS, Tuberculosis and Malaria, the local health clinic where I met Sophie is now able to provide preventative malaria treatment to pregnant women, free of charge. Malaria contributes to the deaths of an estimated 10,000 pregnant women and 200,000 infants each year in Africa, so early and effective treatment can prevent a great majority of deaths.

But tackling malaria in a country like the Central African Republic is a huge uphill battle, and my experiences there have been a healthy dose of reality, fueling my own sense of urgency to do my part in reducing the preventable suffering of the incredible women I met. This year, I will be attending the Clinton Global Initiative University, a meeting for students and national youth organizations to tackle pressing global issues. I am excited about being a part of this growing community of young leaders who don't just discuss the world's challenges, but take real, concrete steps toward solving them -- real, concrete steps to empower women like Sophie to protect herself and her family.