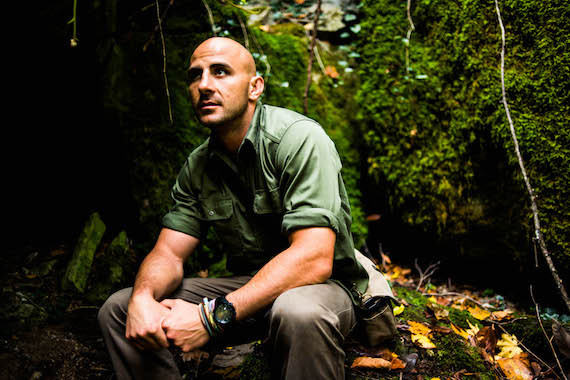 Sometimes nature gets caught up in the crossfires of conflicts and human issues. In the case of the Caucasian leopard, also known at the Persian leopard, the species has been stuck in war zones, and confined to barren, uninhabitable terrains. While our President Elect may not believe in global warming, he can't deny that the world is in upheaval and migrations, by the millions and fueled by feuds, are happening around the globe. That leaves animals, often ones already on the endangered species list, to fend for themselves.

The positioning of the natural habitat of the Caucasian leopard puts its survival at risk. Listed as officially "Endangered on the IUCN Red List," this large feline, the largest subspecies of the leopards, is now confined to the greater part of the Western Caucasus, between Iran, Afghanistan and Turkmenistan, with a few more remaining in Armenia, Georgia and Azerbaijan.

It is in fact in Azerbaijan that the upcoming Nat Geo WILD documentary The World's Most Wanted Leopard takes place. Following filmmaker (and in my opinion diplomat, storyteller, nature aficionado and all around cool guy) Adrian Steirn and his team, which includes local guide and "Leopard Man" Babakhan Rakhmanov and Victor Lukarevsky, a world-renowned Russian big cat specialist, we the audience find ourselves in the midst of a thriller, complete with twists and turns worthy of a mystery narrative film. Will these men find the elusive leopard, and will they be able to outdo it in capturing its image for posterity? The answer is one I won't give away, but lets just say the outcome of this film will affect us all, in real life. It's that important.

I caught up with Steirn to find out more about his journey, which was aided in part by an organization in Azerbaijan called IDEA. Here's what he had to say about his voyage to find this elusive, beautiful, mystical big cat, the result of which airs in December worldwide on Nat Geo WILD. And what we can all do, starting today, to help save the world.

In your documentary, you say something that really struck me -- "I pick up my camera to do one thing -- make positive change". Shouldn't that be the responsibility of all human beings, to work for a better place? And shouldn't all artists pick up their artistic tools to make social relations, climate, human existence and nature better?

Adrian Steirn: Conservation is self-preservation; so making positive change is absolutely a shared responsibility. But humans are inherently self-serving. We only start to care when the water runs out, so to speak -- we can always try to do more.

Do you have any updates on Babakhan, your wonderfully charming guide in Azerbaijan?

Steirn: Babakhan is immensely proud to know that the documentary is going around the world. He is an ardent conservationist and deeply appreciates the support.

What has happened since you filmed in 2014, with the Caucasian leopard, but also with the initiative started by you and IDEA?

Steirn: IDEA and the government of Azerbaijan are working immensely hard to ensure the continued protection of the Caucasian leopard. They are looking at breeding and relocation programs and pouring resources into their national parks and holistic conservation.

Do you think we, as human beings, hold the power of one, to make a difference as singular persons?

Steirn: One person can always make change by creating motivation for many. It starts with the individual, who has to empower a community.

You clearly are part filmmaker, part preservationist, part diplomat, part cross country athlete and all world saver. Does it ever prove challenging to be Adrian Steirn, and in which situations?

Steirn: Nothing comes easy. We only have finite time and resources on our planet. By surrounding myself with capable, resourceful people, I have been able to overcome certain hurdles. But nothing is ever as easy as you think it'll be starting out.

And to someone who has never met you and doesn't know you, how would you describe yourself?

Steirn: As a photographer and filmmaker with a high level of determination. I don't give up easily.

Three things we can all begin to do today, that will help save the world?

Steirn: Educate yourself. Be empathetic. Find ways to take people with you -- don't preach at your audience.