Did you take the ice bucket challenge to support ALS? If so, you found out that a bucket of cold water can hurt so good! At the height of ice bucket madness, 4.4 million tweets contained #icebucketchallenge, $88.5M in donations were made to ALS and everyone from Jimmy Fallon to Bill Gates to Taylor Swift were posting ice bucket videos. But, as Scott Nelson and his team at Viber went on to prove, there were many ways to keep the support of ALS going long after the water dried. Many of our resolutions for the New Year include helping others on a personal level, but what about on a corporate level? How can we use our own corporate brand to empower worthy causes? What steps must be taken, both internally and externally, to truly make a difference?

Last August, Nelson, head of Viber in North America, took the ice bucket challenge with his three young sons. They then challenged their cousins, who happily agreed. Back at the office, Nelson and his team knew that Viber's core competencies made them uniquely suited to keep the public connected with ALS.net's mission, both during ice bucket madness and beyond.

Viber is one of the world's leading mobile messaging apps, with almost 700 million users in 193 countries. Only one year after the start of the Viber x ALS partnership, Viber's ALS TDI (Therapy Development Institute) Ice Bucket Challenge Public Chat has over 1.6 million followers and their Sticker Pack is now one of the most popular packs on the Viber platform. In the first 30 days, the ALS Viber Sticker Pack was downloaded 2 million times and used/shared within the Viber app over 5 million times. Overall, the ALS Viber Sticker Pack has been downloaded over 3 million times and used/shared over 10 million times, keeping the ALS story on everyone's lips (or fingertips) on a daily basis.

I attended the ALS White Coat Affair in November 2015 (which was sponsored in part by Viber) and was blown away to learn how Viber has harnessed their platform not only to sustain the ice bucket challenge excitement, but also to keep people educated about the struggles of those with ALS, keeping them informed about scientific findings, and, most importantly, inviting the public into the quest to find a cure.

I sat down with Scott to learn more about how Viber brought so much focus to ALS both internally at Viber and externally in the world. How do businesses go beyond soliciting donations and actually prompt others to take real action? The short answer is that it's much easier when the initiative aligns with your mission, passion and expertise.

Every Story Needs a Good Beginning

As a performance management consultant and business owner, I love hearing stories about why and how companies were conceived. In 2010, Talmon Marco (now CEO of Viber) needed a free way to keep in touch with his girlfriend while she traveled abroad. So, he created an instant messaging / VoIP app so they could stay connected. Thus, Viber was born. Viber's tagline is "Connect. Freely." and is at the heart of everything they do. All brand positioning is centered on "going out into the world on a daily basis and making sure we're spreading good vibes," explains Nelson. A great way to spread good vibes is to enable and empower worthy organizations like ALS.net.

Prior to Nelson's arrival in early 2015 to the newly created role of Viber's North American head, the organization did not have an office in the US. Their 300+ employees are now located across the world, in the North America, London, Tel Aviv, Japan, Russia, Belarus, Luxembourg and the Philippines. How do employees of an international messaging company communicate? Via chat groups, of course.

Nelson describes, "We use two internal group chats (dubbed "Purple Group" and "Chat Moments") which are external facing [Public Chats], meaning people around the world can follow them. We have employees all around the world utilizing these two group chats to talk about what's going on in their office, whatever they're doing from a marketing standpoint, what's going on with the business in their region, etc. It's a constant chat amongst over 300 employees worldwide." Viber also offers "sticker packs" as another form of expression and emotion.

In the beginning stages of the ALS.net partnership, Viber employees merely used their Public Chats (which are visible to all Viber users) to discuss how the company, as a whole, could help support this cause. "Not only had every employee in Viber seen [the plan to support ALS] but users around the world could follow what we're talking about. The purple chat group has over 12 million followers, the other chat [Chat Moments] has over 3 million followers" explains Nelson.

From this point, the Viber x ALS partnership was crystallized, formally beginning with the launch of an ALS Public Chat and a customized Viber Sticker Pack. "It's really allowed us to give a voice, or rather a place, in a very popular communication app for people with ALS to reach out, tell their story worldwide. People really genuinely want to help other people and I think the public chat on Viber allowed a way for people with ALS to connect with people who want to help," says Rob Goldstein, Vice President of Marketing, Communications and Development at ALS.net. Users drive engagement through their own workplaces, with colleagues, friends and family following the conversation and subsequently becoming informed. 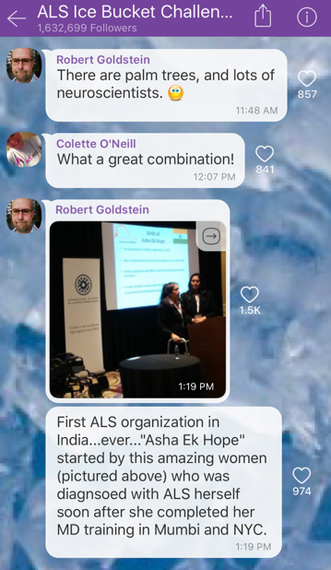 In my consulting role at Acolyst, I often help clients enhance the awareness of their brands in the marketplace. The steps to execute a successful brand awareness initiative share much in common with those of a charity partnership. So how can organizations learn from Viber's success when launching an awareness initiative?

We're barely into 2016, and there is so much that we can all do to help others, while also bettering ourselves. As ALS.net heads into the New Year, its goal is to continue "taking the plunge", with global affiliates aiming to raise over $12 million for research to find a cure. "That kick(ed) off January 1st with a couple of plunges into very cold ocean waters here in the US and we'll go all the way through to ... the international ALS meeting in Dublin, Ireland at the end of the year," shares Goldstein. Obviously, this is a very committed group of people dedicated to a very important cause, and Viber hopes to keep attention on them. To paraphrase Scott Nelson's words, great power comes with great responsibility. With over 700 million pairs of eyeballs on Viber, they feel the obligation to make it count. Find out what makes you great and use it to help others. Make 2016 the year that your company inspires the community to take action in a meaningful way.

Valeh Nazemoff is international bestselling author of The Four Intelligences of the Business Mind, as well as a coach, business consultant, and co-owner of Acolyst. She is founder of the Communication Transformation Business Workshop.

Learn more about her programs and how to work with her http://www.valehnazemoff.com and her company http://www.acolyst.com

Take action by connecting and following her on http://www.twitter.com/valehnazemoff and/or www.facebook.com/officialvalehnazemoff