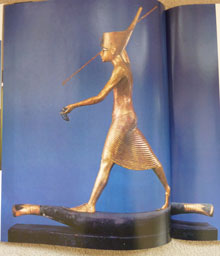 The sad and shocking results of the complete inventory of the Egyptian Museum that Zahi Hawass, Egypt's Minister of Antiquities, had promised us on Friday are now in: On his website Saturday, Hawass reported that 18 objects (11 of which are wooden shabti statuettes from Yuya) have been removed from the museum, presumably during the Jan. 28 break-in that occurred amidst the chaos in Cairo's Tahrir Square, where the museum is located.

An investigation has begun to search for the people who have taken these objects, and the police and army plan to follow up with the criminals already in custody... In another terrible turn of events, last night a magazine [storage structure] in Dahshur was broken into; it is called De Morgan's. This magazine contains large blocks and small artifacts.

On Friday, Hawass revealed that he had obtained a report that two Roman Period mummies from the storage magazine in Tuna el-Gebel might be missing. He had previously unequivocally stated:

All sites in Middle Egypt, such as Tuna el-Gebel [emphasis added], Amarna, and Beni Hasan, are safe.

Similarly, he had previously and erroneously stated that "nothing was stolen from the [Egyptian] museum" during the break-in. Some of the museum objects now reported as missing are composed of stone or ungilded wood, which runs counter to Hawass' previous assumption that looters at the museum "were looking for gold" (for the intrinsic value of that material), rather than seeking objects that are valuable as antiquities.

These are the latest, most dramatic examples of the disconnect between the assurances about the security of Egypt's antiquities that Hawass has repeatedly made on his website and the facts that are gradually emerging about serious looting. Perhaps his comforting reports about other sites (including Saqqara, where his assurances conflicted with recent accounts from people in the field) were similarly based upon incomplete, fragmentary reports.

The fact that Hawass may have lacked full, reliable information during the past two chaotic weeks is completely understandable. But his misleading previous assertions about the Cairo museum break-in, where his own on-site knowledge must have (or should have) differed from his public pronouncements, is less excusable.

Similarly problematic were his strong "factual" pronouncements regarding the security of antiquities sites, about which he lacked complete and reliable information. If Hawass didn't know the full extent of the vandalism and looting, he should have acknowledged that, rather than giving blanket assurances that all was well.

About that statue, Keyser quotes the museum's director, Tarek el-Awady, as saying:

It's the most important one [of the missing objects] from an artistic point of view. The position of the king is unique and it's a beautiful piece.

Also beautiful are the partially missing statue of Tut harpooning (pictured at the top) and the damaged statue of Tut standing on a panther, both of which I marveled at during my two visits to the "Treasures of Tutankhamun" show at the Metropolitan Museum, back in 1978.

It is odd that the Akhenaten sculpture was initially announced as being damaged but is now known to be stolen. It suggests that there may be more sad news in days to come.

I assume Maitland is referring to Hawass' report in this post in which he stated that a "standing statue of the king carrying an offering tray," which was contained in a vandalized case of objects from the Amarna period (when Akhenaten reigned), "sustained very minor damage and is repairable."

At this writing, there are low-quality images of only three of the stolen objects on Hawass' website. (As far as I can tell, the Egyptian Museum's website is not functioning, at this writing.)

All of this is to say that we need more candor and transparency from Egypt's Minister of Antiquities. Minimizing the problems undermines the credibility of the minister.

The Egyptian Museum's most urgent priority, aside from assuring the security of its holdings, must be to post and widely circulate high-quality images of what's missing, along with information about where sightings of this stolen property should be reported.

Everything must be done to prevent these treasures of Egyptian cultural heritage from moving from the Cairo museum to the black market.