Donald Trump doesn't speak for me, or my black and Hispanic friends, or my friends raising kids alone, or my gay, transgender and bi friends, or my veteran friends who feel abandoned by the country that sent them to war. 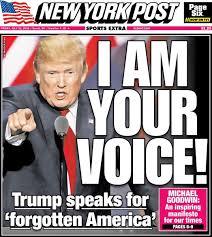 Donald Trump IS the voice of millions of people who are very, very angry. But, there are more of us than there are of them. Unless we find a way to come together and vote in this next election, Trump will be speaking for all of us. He will marginalize, eliminate, and silence our voices and our beliefs. He will capitalize on fear and greed and usher in a new wave of sanctioned racism and hate.

This election isn't about Hillary Clinton, her email, her likability, or her pick for VP. This is about you. We are stronger together. ‪#‎NotMyVoice‬