As thousands of Notre Dame football fans watched the Fighting Irish battling it out with the University of South Florida on Sept. 3, a fierce lightning storm approached the Indiana stadium, leading the crowd to evacuate. And while the game was in delay mode, many people caught sight of several unidentified flying objects darting around the lightning bolts in the sky.

Video captured bright orb-like objects as well as tube-shaped elongated ones circling in the sky above. 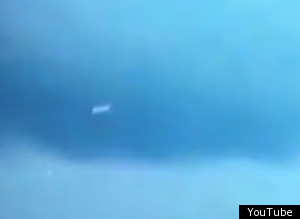 UFO aficionados have questions. Were the objects merely part of the storm as debris flying about in the wind? Balloons or birds caught in the ongoing turbulence and seen on video? Or were they alien gridiron fans looking to watch a big game from above while refueling their planet-hopping propulsion systems?

"Since it was at a stadium, it would be astonishing if there weren't 20 videotapes of it," said NBC News space consultant and UFO skeptic James Oberg. "In a case like this, you start out looking for other images and go from there."

Oberg, a former NASA rocket scientist and author of numerous books, including "Star-Crossed Orbits: Inside the U.S.-Russian Space Alliance," says there's enough teasing behind UFO reports in general, "and I wish we could filter out the good stuff, but so far we haven't."

Another doubting eye on the Notre Dame reports comes from Robert Sheaffer, a longtime skeptical investigator of UFO claims.

"Unfortunately, there's no way to tell how far the object is from the camera," Sheaffer said. "You can clearly see the raindrops coming down, illuminated by the stadium lights. When the object's apparent motion is fastest, it looks very much like the so-called 'Roswell Rods' that Jose Escamilla has been promoting.

"The angular motion of the object is too fast for the video to capture it clearly. The frames are too slow, and so the object blurs and stretches out into a rod," added Sheaffer, author of the new book "Psychic Vibrations: Skeptical Giggles From The Skeptical Inquirer."

Oberg said the proliferation of digital cameras should make the identification process of UFOs easier these days.

"In a lightning storm, there's always interesting, if bizarre, lightning phenomena, and you wish you had better documentation and multiple cameras and an ability to establish what particular origin that this kind of light would have," he said. "With so many cameras out there now, it's getting harder and harder to make excuses for the absence of corroborative photographs."

Oberg's skeptical colleague, Sheaffer, agrees that the evidence from Notre Dame is currently too scant to suggest extraterrestrial influence.

"I think that the [Notre Dame] object is a bit farther away than that. It could easily be a piece of wind-borne debris, maybe cardboard, spun around by the severe winds of the thunderstorm. It could also be a bird, frantically trying to make its way to safety," he said. "Without distance information, we can't say for sure what it is. There's no reason to think that it represents any kind of alien activity."

What do you think? Was this an ET visitation, storm-driven debris or insects flying very close to the camera? Send us a comment below.