French officials are planning to construct a temporary wooden cathedral on the esplanade in front of the Notre Dame while the fire-ravaged landmark is being rebuilt.

“We mustn’t say ‘the cathedral is closed for five years’ and that’s it,” Chauvet told France’s CNews television channel Thursday, according to an AFP translation.

Paris Mayor Anne Hidalgo has indicated her support for the idea to give part of the esplanade to the church for a temporary structure, according to the Guardian. The Paris City Hall approved the idea on Thursday, “subject to technical restraints,” the Associated Press reported.

About 13 million visitors visit the Notre Dame Cathedral every year.

The esplanade in front of the Notre Dame’s twin towers is built over a crypt that contains artifacts from antiquity.

Paris police announced today that they believe an electrical short-circuit may have caused the devastating blaze at the iconic building on Monday. The blaze destroyed the spire and the cathedral’s roof, but volunteers were able to save its famous bell towers, rose windows, organ and other precious artifacts.

While the Notre Dame is a Catholic cathedral that hosts daily worships services, it is officially the property of French state. As a result, the government is responsible for rebuilding it.

French President Emmanuel Macron has vowed to restore the Notre Dame in five years, a pace that experts are saying is ambitious for such a massive project.

In the meantime, the island where the Notre Dame is located is still largely closed to the public, as workers seek to secure the structure. Chauvet hopes the wooden cathedral will be built as soon as the esplanade reopens. The priest said he wants the temporary structure to be “beautiful, symbolic and attractive,” the BBC reported. 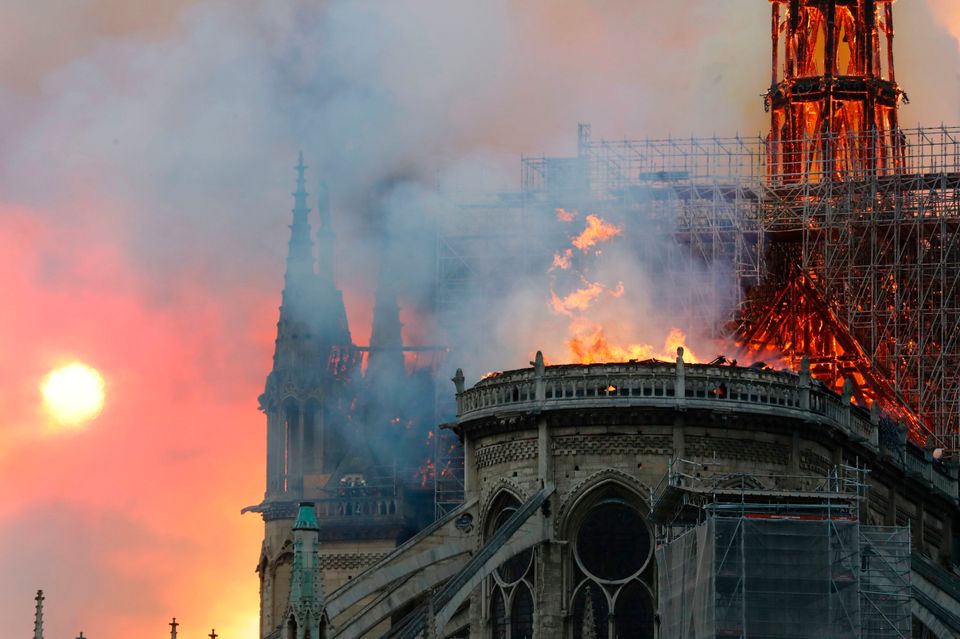 1 / 18
Smoke billows as flames destroy the roof of the landmark Notre Dame Cathedral in central Paris on April 15, 2019.
FRANCOIS GUILLOT via Getty Images