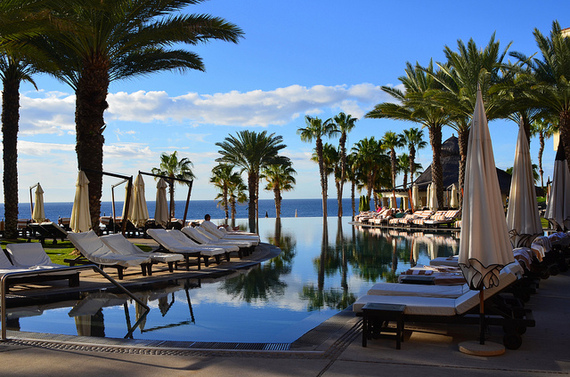 Around summer time, many Americans look forward to a week off from work where they can unwind and spend time with their families. Yet, the reality of taking a vacation while employed is that one in four U.S. workers don't receive paid time off. Unable to pay a holiday or run the risk of being let go from their job, most employees decide to continue their day-to-day work routines even if they happen to reach an agreement for vacation days with their employer.

I know we're not living in the European Union, where the law guarantees at least four weeks of paid vacation. But does the U.S. really have to resort to the opposite extreme?

Having 28 paid days off like workers do in Switzerland or 35 days like in Luxembourg just won't happen any time soon for most American workers. Nonetheless, the fact that the U.S. is the only advanced economy that does not require employers to offer any paid time off is unjustifiable and in many ways immoral.

According to a Families and Work Institute study released in 2001, a third of Americans reported that they were chronically overworked. Naturally, draining days at work can lead to stressful nights at home. Without the much-needed time to unwind, depression and cardiovascular problems can quickly emerge and begin to severely affect a person's well-being.

With the physical and mental health of millions of Americans at stake, how is it that the United States does not require employers to provide their workers with paid vacation days? In order to actually provide more citizens with the opportunity to take a vacation, the Paid Vacation Act, which would amend the 1938 Fair Labor Standards Act, needs to be passed in Congress. With Democratic Congressman Alan Grayson at the forefront, this piece of legislation would initially require companies with more than 100 employees to offer any employee with a year of service under their belt a week of paid vacation per year.

Passing the Paid Vacation Act, however, will not come without a battle. Conservative commentators have likened the act to socialism, while others strongly believe that it would reduce the country's productivity levels. Additionally, many corporations contend that mandating paid vacation days would lead to unnecessary expenses.

To those who fear socialism, I would tell them to take a look at Sweden. They're not doing all too bad, now are they? To those frightened by decreasing productivity levels, I would show them studies that have found that vacation can increase performance by a whopping 80 percent. And, lastly, to the powerful CEOs and businessmen who feel uneasy about possibly accruing additional expenses, I would let them know that healthy employees make healthy companies.

Now, even if the necessary laws and regulations were passed, the U.S. would still have a long way to go to revive its once cherished institution of going off on vacation. Sure, the average American employee would feel secure enough with their position to take some time off. But even so, vacations are expensive. How would most low-wage workers afford it?

Fortunately, a handful of American companies recognize these issues and are providing their employees with the means to take a vacation. The Motley Fool, an investment-services company with over 300 employees, selects employees at random each month and offers them a two-week paid vacation with a $1,000 stipend. Moreover, Denver based software startup FullContact provides employees with paid time off and a $7,500 stipend meant for the expenses of the vacation.

If only all companies could be like The Motley Fool and FullContact, we'd be living the dream. For now, the government should focus on getting the Paid Vacation Act passed by Congress. Once employers are required to pay their workers' time off, more Americans will be able to take a vacation. In addition, by having the opportunity to relax and take care of themselves, Americans will begin to lead healthier lives.

Being from Argentina, a developing nation that offers paid time off, I am aware of the personal benefits of vacationing. It has meant getting to know my father better. For others, it can mean connecting with friends or enjoying their hobbies. Whatever the case may be, one thing's for sure: at some point we all need a break.